That was what I thought, hence the questions I asked, thanks for sharing this info. I didn't know he changed his avatar.

Biffins said:
When did it come out that Bill was "texting Jimmy after every game"? Wow. I didn't know.
Click to expand...

The notion that if you don’t agree with everything Bill does than you’re a bad fan is ridiculous.

farn said:
I want the team to win SBs. Brady wasn’t winning a SB with this team. If they miss the playoffs for the next 5 years, I’ll be longing for a return - even if it means an early exit. But, after this much success, going 10-6 and losing the first round isn’t enticing.

You strongly believe NE was a contender this season with Brady ? If so, we disagree.

They stuck together for 20 years. That’s amazing. You are putting emphasis on the departure rather than the long stay.
Click to expand...

Yes I think with Brady we get to the playoffs in 2020 with this team especially if some of the stalwarts from the Number 1 defense in 2019 didn’t opt out because of Covid19 (which was not known at the time of Brady’s release and shouldn’t be factored in).

And once you’re in the playoffs anything can happen. The Bucs were wildcard into playoffs. 2018 Patriots were mediocre upto game 14 before final 2 division wins and even then not the strongest.

Teams can get hot in the playoffs if they click, and others built to “win now” like Saints or Packers this year, can stumble.

I think Brady was good for 4 wins, Pats get to 11-5, get to the playoffs. And then anything can happen. Brady is clutch and others crumble under pressure. We have seen that before.

farn said:
He was focused on winning that game. It was close until the very end, despite the lack of talent (and key reg season injuries) on D. I suspect you are blaming the benching of Butler on that loss ? Firstly, we don’t know the specifics, secondly we can’t be sure his mere presence would’ve made the ultimate difference.
Click to expand...

He may have been focused on winning the game but he was utterly determined to do with Butler squirming on the sideline. He was trying to humiliate a player that he had a problem with. True, we don't know exactly what the problem was, but it wasn't sickness related, it wasn't performance related... it was personal and there's no doubt about that because Butler was in uniform and he played in the game.

Other than me, at least two other people think Butler would have made a difference in the game... Butler himself and Belichick. Butler because he said as much immediately after the game and Belichick because he had Butler on the field for nearly 100% of the defensive snaps for three straight years running up to that Super Bowl.

Butler was ready to play, he knew it, Belichick knew it, Brady knew it, and anyone not twisting themselves into a pretzel making excuses for Belichick knows it.

Belichick lost Super Bowl 52... not Butler, not Brady, not the players... the head coach lost it. A more costly decision has not been made by any other head coach in the history of the league.


farn said:
I’m perfectly fine with « moving on » from Brady. It’s an oversimplification to uniquely blame BB for Brady’s departure. First, NE wasn’t going to win the SB this season, w or w/o Brady.
Click to expand...

You're right... Brady's not a winner.

No way a 6th round draft pick is going to make any difference whatsoever for a team who just lost their $100 million dollar veteran quarterback and is stuck in a 5-13 rut.

No way a quarterback is having the greatest single season of all-time and going 16-0 with a washed-up diva and an unheralded kick returner.

No way a quarterback is coming back from down 10 in the 4th quarter to the Legion of Boom.

No way a quarterback down 28-3 is orchestrating the greatest comeback in the history of professional sports.

No way a quarterback can pass for a combined 971 yards and 67 points in back-to-back Super Bowls.

No way the greatest player in the history of the NFL with 34 postseason wins, 14 postseason game-winning drives, 7 Super Bowl rings and 5 Super Bowl MVP's is going to make a difference for a 7-9 team with a sh*tty quarterback. Oh wait... THAT JUST F*CKING HAPPENED!!!

Brewskies said:
Bifffins, what is your favorite NFL football team? What are your favorite MLB, NHL and NBA teams? thanks don't lie. You won't get bounced from this firum, truth please.
Click to expand...

If you want more details, I came to the US in mid-90s when I was 18 and went to MIT and learned about all the American sports and started following them then and obviously started supporting the Boston teams from then on. I wouldn’t say I am the biggest hockey fan but other 3 sports I followed regularly since the. and my Fenway Park experiences remain epic and memorable.

The above story is too quixotic to be made up.

farn said:
You’re a bit of a weirdo, Deus. Welcome back.

If this GIF is to suggest BB wasn’t a big part of the success, agree to disagree. I know you heart Brady.

If, as I suspect, you are astounded that I am suggesting people discredit BB’s impact, then let me give a short compte rendu of the fun you’ve been missing. 39 and unders who’ve seen little but winning have been saying (I paraphrase) :
-it’s 100% Brady
-BB rode coattails all this time
-Weapons, weapons, weapons, where are they ?
-I want my team to be just like Madden
-7 and 9 is the worst and I can’t imagine any team has ever been this horrendous because 7 and 9 is the worst possible record in the world
-and such

In closing, weirdo, but our weirdo. Welcome back.
Click to expand...


I've not seen anyone who's seriously meant "100% Brady, 0% Belichick", though I've seen the hyperbole make it seem as if they have. I've seen people make it clear that they think Brady was much more important, which is certainly a fair take for a lot of reasons, as long as it's understood as requiring context. And people have been talking about BB's lack of TB12 with adequate and proper offensive weaponry for a long time. That's not something that just came up this day/week/month/year.

I just can’t get over how one can use this reasoning about SB52:
The f*ck?

Ice_Ice_Brady said:
I just can’t get over how one can use this reasoning about SB52:
The f*ck?
Click to expand...

Jordan Richards was so good that he was dumped after the Superbowl by the Patriots, and has become a special teams player for Ravens.

These 2 instead of Butler. COME ON!! Same Butler who got 5yr $61m deal after that "coach's decision" to bench him and has been a stalwart for Titans.

Both cases, BB fcked up. 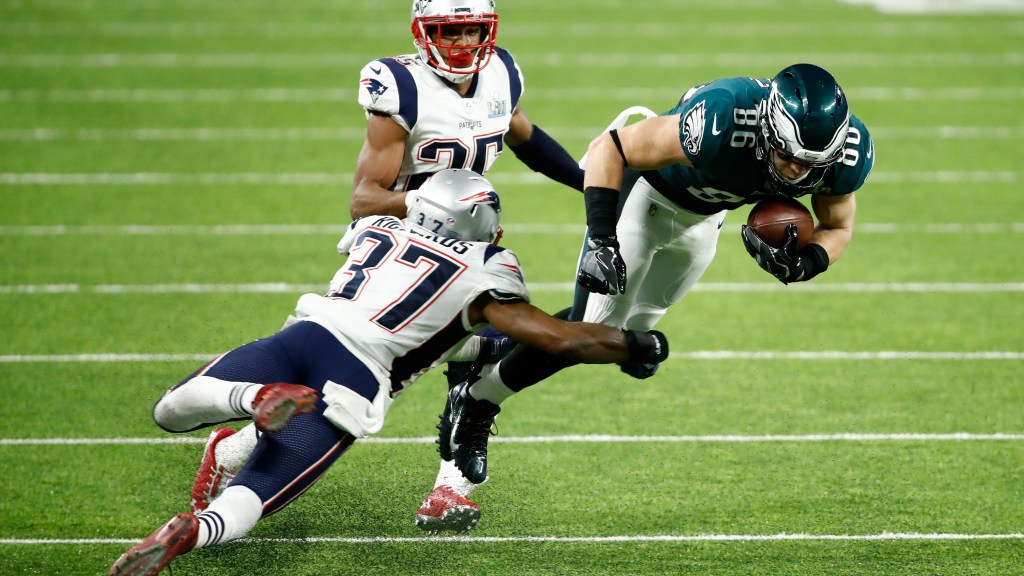 I was embarrassed just reading what he wrote about Brandin Cooks.

Cooks was traded because he's always been the same Brandin Cooks wherever he went. And he was worth a 1st rounder.

If they traded Cooks to play with anyone other than Brady, you'll have to tell me why so many teams have moved on from him (even though he's a good WR and has talent). But are the Saints, Patriots, Rams and soon the Texans all wrong about the same guy? He is likely an excellent #2, but not capable of doing what you brought him in to do.

In Brady's first game with Cooks, he went deep to him 5 times, 1x 25+ yards, one time 54 yards, and a 26 yard DPI. He went deep to Cooks all year to good affect. But no one here cried when Cooks went away because we didn't see a game breaker. His game was quite similar to Brandon Lloyd's, who was a really really good #2.
Click to expand...

I thought Cooks was going to be a great addition in New England, and he could have been had he ever invested the effort into learning a variety of routes, but as it turned out go deep and pretend to go deep and come back for the ball were the only two he ran. Serious disappointment as he has exceptional talent.
I

Malcom Butler has admitted that he wasn’t ready to play that game.

Ivan said:
I thought Cooks was going to be a great addition in New England, and he could have been had he ever invested the effort into learning a variety of routes, but as it turned out go deep and pretend to go deep and come back for the ball were the only two he ran. Serious disappointment as he has exceptional talent.
Click to expand...

It has been the story of his career since he's been passed around to so many teams. Saints-Patriots-Rams-and who knows how long he'll be with the Texans.

Ivan said:
Malcom Butler has admitted that he wasn’t ready to play that game.
Click to expand...

Please could you provide a link where that's precisely what he said?

Ivan said:
Malcom Butler has admitted that he wasn’t ready to play that game.
Click to expand...

Please. At half time a cat could of been inserted at DB and done a better job. Please post where you read that and either way, you put him in if your the coach after getting torched for half a game.
I

Biffins said:
Please could you provide a link where that's precisely what he said?
Click to expand...

No, he said it after he got to Tennesse and I’m not going to waste my time going looking for it. You can believe whatever you want.

203Pat said:
The notion that if you don’t agree with everything Bill does than you’re a bad fan is ridiculous.
Click to expand...

I personally don't but the level of disdain for Bill after one 7-9 season is honestly a bit extreme. Especially after six rings. It is fine to disagree with some of what Bill has done, but certain people are almost posting as they want him fired.

StockingAnarchyNumber12 said:
I personally don't but the level of disdain for Bill after one 7-9 season is honestly a bit extreme. Especially after six rings. It is fine to disagree with some of what Bill has done, but certain people are almost posting as they want him fired.
Click to expand...

There are definitely a few posters going overboard railing on Bill. That being said twisting yourself into a pretzel to defend his recent personnel moves and shoving Brady out the door with no backup plan is ridiculous. I’ve said it a dozen times now that neither Bill nor Brady would have won 6 rings without the other one.

PatsFans.com Supporter
2020 Weekly NFL Picks Winner
Just watched the Greg Bedard podcast episode where the question of Caserio being phased out was the topic and he said BB has been known to go rogue on drafting and ignores what his player personnel suggest the direction to go. Rumor has it, they suggested BB go heavy on offense, but he used the first 3 picks on D.

This is the 2nd person I've seen along with Lazar being the other that suggest BB has been known to go rogue when drafting despite what his player personnel may suggest.

Biffins said:
Please could you provide a link where that's precisely what he said?
Click to expand...

Here’s the link he was referring to.

Here’s the link he was referring to.
Click to expand...