6 years ago at 11:00 am ET
Follow @SteveB7SFG
Posted Under: Patriots News

Coaching Staffs Communicate and Have Respect for one another

The Patriots will conduct joint practices with the New Orleans Saints on Tuesday and Wednesday, August 9-10 prior to their first preseason game on Thursday night.

This will mark the fourth time that the Patriots and Saints will conduct joint practices, the third time in Foxboro. The Saints visited here back in 2010 and 2012 and the Patriots visited the New Orleans training camp facility in White Sulphur Springs, WV a year ago.

It is interesting that in the constantly changing landscape of the NFL that the Patriots and Saints both have the same head coach/quarterback combination as they did back in the first joint practice in 2010.

Sean Payton and Drew Brees remain with the Saints while Bill Belichick and Tom Brady are still working their magic in New England. The two sides are deep with respect for one another, a year Belichick spoke about the respect he has for Payton and the Saints staff. 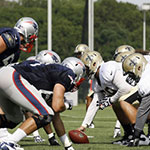 “I have all the respect in the world for the Saints, their entire organization, Sean, the way they do things,” Belichick said. “We’ve got a great working relationship with the Saints, Sean and his staff. From a coaching standpoint, we both feel like we get done things that are beneficial to our teams. Players work hard, but they do it in the right way.”

Drew Brees and Brady have long maintained a cordial relationship during these practices and have a mutual respect for one another. “I’m a big fan of Tom Brady,” Brees said. “As a player and I really enjoy being around him as a person.”

Unfamiliar Opponent and Chance for Added Competition: The Patriots traditionally under Belichick have loved these joint practices and they attempt to do a couple each season. And they work for the simplest of reasons. One is that after facing their teammates in training camp for a while now, this will give them the opportunity to face off against an unfamiliar opponent and changes things up a bit.

Going against another team always stokes the competitive fires in players and for those players on the bubble at the back end of the roster, it gives them extra reps against an opponent that may help them win a roster spot. Where  in a preseason game a certain player may only get a couple of snaps to show what he can do, in the joint practices they’ll get  more opportunities to shine.

The coaches also get to work on game specific situational football scenarios that they have recently installed into the offense/defense. It takes good communication between the head coaches and there has to be a level of trust there. Belichick spoke about that in his press conference on Sunday.

“Yeah, somebody you can work with, that’s the number one thing. That’s above all else. We have a great relationship with the Saints, with Sean [Payton] and his staff, the organization,” Belichick said. “It’s always worked out well the times we’ve done it with them, so if we have an opportunity to do it with them we try to take advantage of it. It’s been really good. They’re great to work with.”

And a final advantage to these practices is that you can always find a player that may not be a fit for the opponent that may fulfill a role with your team. That allows the coaches to evaluate the player and see more of him in a close, working situation.

The Patriots saw that with the Saints Akiem Hicks who didn’t have a role in their defensive rebuild a year ago but was traded to the Patriots and played very well for the team in 2015. The Patriots also got to see ST/LB Ramon Humber last season, who they signed as a free agent this spring.

But the list is long, others the Pats practiced against and then brought in includes but isn’t limited to, Frank Kearse, E.J. Biggers, Jonathan Casillas, and Aqib Talib.

So the Patriots will be installing some new wrinkles in the playbook and will be using them against the Saints in the next few days. Belichick told the media, that they won’t be installing anything new per se, that they went over these things in the spring and now they’ll evaluate the players on how well they produce.

“Well, we still have things we need to install. We still have a lot of situation work we need to cover,” he said. “I know we’ll be doing some of those things against New Orleans, so it’ll be good to have already put it in, to have run it, and then run it against them, rather than go out there and have that be the first time. A lot of times there is some ironing out to do. We’ll try to get some of that out of the way the first time or two and then try to run it competitively.

If you’re planning on heading down to training camp for the two joint practices against the Saints, be advised plan on arriving early. Those workouts are traditionally very crowded and as always, it is first-come, first served. Both practices are scheduled to run from 9:15 a.m. to 11:45 a.m. daily. But check with Patriots.com for any updates.