There's your TO Coach Rivera

PatsFans.com Supporter
The opposite of screwing up the tie!

Hammer of Thor said:
JC Jackson looked decent tonight when he was out there, but obviously he’s a lot better as a 2 than a 1. And more importantly, no one is impressing as a potential 2 alternative.
Click to expand...

JC is fine, but I’ve got a lot of questions after that. Jones is good as the slot guy, and I like Bryant as a developmental guy but he’s small too. Don’t know.

2021 Weekly NFL Picks Winner
Holy crap, that's what you call a BAD BEAT for anyone with Washington or the Under.

Need video of that TD!

Scored 4 touchdowns in one game

Ring 6 said:
We don’t know that. He may have not wanted to go elsewhere.
Click to expand...

He didn’t. He said some teams showed initial interest then disappeared. Then reappeared. They couldn’t make up these minds.

He’s on a one year deal. 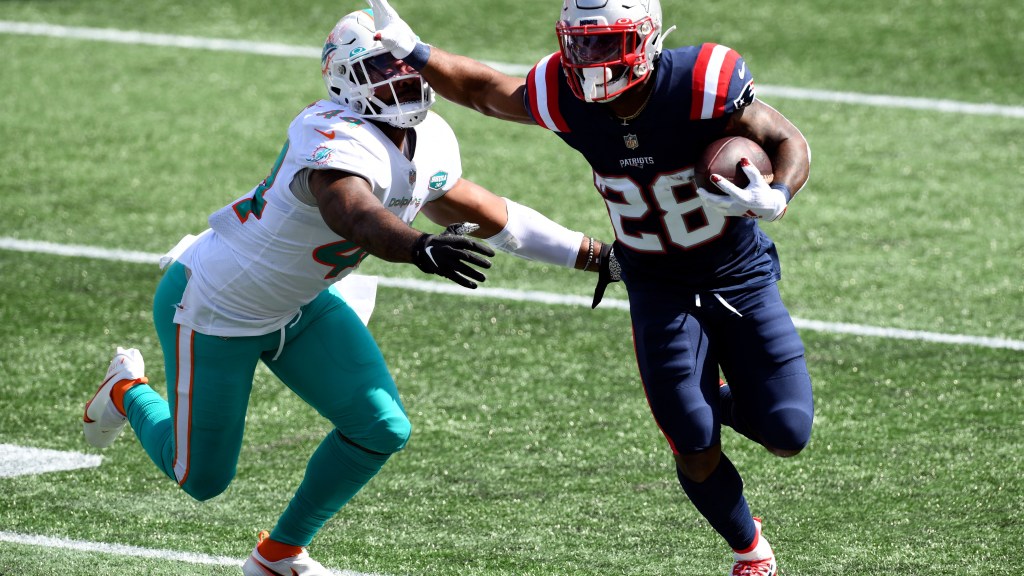 James White detailed why the free agency process was so strange for him.

PatsFans.com Supporter
Lots of impressive things on that run, but what I liked the best was the burst at the end of the run.

PatsFans.com Supporter
Kudos to the stadium DJ for playing 'Born to Run'!
N

Hammer of Thor said:
Lots of impressive things on that run, but what I liked the best was the burst at the end of the run.
Click to expand...

He ran away from th e LB, and once the DB didn’t get the angle he wasn‘t closing from behind. That’s some football speed!
R

TheRainMaker said:
He didn’t. He said some teams showed initial interest then disappeared. Then reappeared. They couldn’t make up these minds.

He’s on a one year deal.

James White detailed why the free agency process was so strange for him.

That’s not what he said.

PatsFans.com Supporter
Now even the NFL is pushing the (same) video...

Scored 4 touchdowns in one game

“Some days, a team may have interest; the next day, they may not; and the day, they might have interest (again). So it’s a little different than you can ever imagine. It’s a lot of worrying what’s going to be next and where you’re going to be at next.”

Joker said:
Hoyer back in for 2nd series...thought BB might stick Mac back in...you know...to see how he reacts to adversity...gar gar gar gar
Click to expand...

If Belichick really wanted to see how Mac reacts to adversity, he'd put him in at wide receiver when Cam's the quarterback.

ahmed said:
Is it just me or does Jones not have any zip on his throws? NFL DBs will break up or pick off some of these passes if this is as hard as he can throw.

His arm strength isn't why he is here. He's no noodle arm though. He's a natural passer. When people were covered at Bama, he could throw them open with touch and placement. Mac seems as advertised. Go check his senior bowl tape, it's insane he fell to us. That kid from BYU is going to be eaten alive.

Mac can run the 2-minute offense. Looked very comfortable in the hurry up to start the 3rd, not many NFL qb's can handle this. Cam is an example.

RB:
Cut Bolden, see if you can get a swap of late picks or something for Sony. Keep JJ of the PS, Stevenson's extra gear around midfield on that 90 yarder is exactly the burst Sony has never had. Known for vicious pass pro, plays ST iirc too.

To those poo-pooing the talks of sending White elsewhere, it isn't as crazy as it sounds. He probably brings more (to the right team with the right injury) trade value than Sony. White is basically useless with Cam under center. Be real. It's 50/50 that cam gets a damn screen/swing pass delivered catchable, nevermind on target/on time. And too Mac, who's never played with him before - he's a beyond his prime pass catching rb. Further, the HC has a penchant for being a year too early, rather than a year too late when moving on from vets.

I'm not saying I'd plunk any money down on BB/McDickhead moving on from White, but it wouldn't be insane if they did.

Game Thoughts: The Pats got BBQed by KC