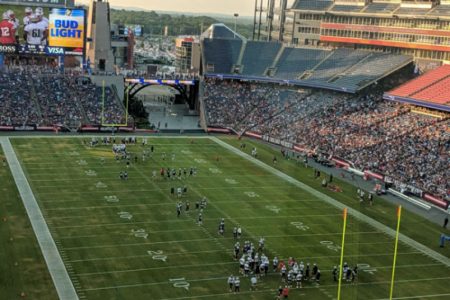 VIDEO: Tales of the Threads - An Inside Look A Patriots' Jerseys Through History
By: Robert Alvarez

So at this point what should Pats fans be hoping for?

Still want them to do well and compete. I want to at least feel good about next year that improvements here and there can elevate us back to contention. Without having much of a shot at Trevo a few draft slots isn’t going to help much in regards to fixing our issues.

Murray scares the crap outta me though and should have a similar day as Watson. And our offense probably ain’t winning any shootouts

Murray, Hopkins, Fitz, Kenyan Drake.....pick your poison !! They have a really good team .

With the LVR loss, I'm staying delusional and rooting for a win. We still have the tiebreaker for the 3 6-4 teams ahead of us (which also makes today's loss painful).

So at this point what should Pats fans be hoping for?

Hard to root for your team to lose but their playoff chances are over and it’s somewhat all about the draft now....even tho like many have mentioned they are still going to be middle of round anyways.....AZ will destroy them next week so no need to “hope” they lose!
S

Will probably beat the Cardinals and loose against the Chargers at this rate.

Scotty said:
Will probably beat the Cardinals and loose against the Chargers at this rate.
Click to expand...

I tend to agree with this. It's a very inconsistent result for this team from week to week. Adjust expectations accordingly.

I just want to see them compete. Draft position or not, a lot of the guys on this team now will be on the team for a while. I don't want to watch them give up, or take on that identity.

All I ask is exactly what I asked of the Baltimore game; just compete. Look like you belong on the field with decent competition. Highly doubt we're winning the Super Bowl this year (one can always hope until mathematically eliminated), but if we're hoping to be contenders in future years, it'd be good to see the young guys can hang with decent teams.
S

Agreed we do have some good players on the team and a few that may have to hang up their boots soon. I do feel that this will take more than one year to resolve and be consistent. Murray is a handful , however they are a 6 and 4 team taking defeats from the Lions,Panthers,Dolphins and Seahawks. They were all reasonably close games except the Panthers (10 points) so they are beatable. Other posters will highlight better tactics but I would assume that Murray will have to be better contained than Watson was yesterday ?

2020 Weekly NFL Picks Winner
I want them to be competitive. losers tank....and that’s unwatchable to me....
S

PatsFans.com Supporter
I'd rather watch the patriots win than lose.

PatsFans.com Supporter
Always root for the win. What kind of question is this.

Pats win this one.

A West coast dome team traveling East should have a difficult time. Bonus trouble for bad NE weather this time of the year.

BB will take away Hopkins. The Hail Murray was incredible, but it was a hole in one. Im not sold on Murray at all.
P

PatsFans.com Supporter
I get wanting to win. I’m not here to argue that. Here is the state of the draft:

At this point, Lance & Wilson should be available at the 4th pick. The pats aren’t getting the 4th pick however it is more feasible to trade up from the 8th pick rather than the 15th pick.

A competitive 6-10 would be the most desired outcome from draft positioning & not outright tanking.

Lets throw it 42 times and lose. Not my idea, it’s some guy named Josh’s.

I'm rooting for competitive games and no injuries. I'm also rooting for the younger guys to step up and play well. But let's look at things anyway.

Teams with Bad records: Pats, Jets, Chargers, Broncos, Texans, Jags, Bengals, Eagles, Cowboys, Giants, Washington, 49ers, Lions, Vikings, Falcons Panthers. These 15 teams will finish with losing records most likely and besides the Jets and Jags they are within 1 loss of each other.

Teams not looking for a QB: Chargers, Eagles, Texans, Jags, Bengals, Cowboys, 49ers, Lions, Vikings, Falcons, Panthers. There is talk the Jags might move on from Minshew but I don't see it. He's played okay. The D and the weapons are the main problem.

While order matters, in the end it's all about who will want to trade up. Any of those bottom teams can pull the trigger an jump to #2, which will probably be the Jags who would love to trade it for a king's ransom. The best thing that could happen is Washington who is only half a game back of the Eagles getting the lead in the division and winning it. That would make it hard for them to jump up. The Pats probably finish 6-10 and if so they could easily fall in the 4-8 pick range. Depends on the tie breakers. The Jets will clearly sit pat and pick Trevor. The question is how much the Pats will need to trade up to get the #2 or #3 QB (Fields and Lance). They are impressive enough that someone will.

Personally I'd be okay sitting pat and seeing what happens. My personal preference for #2 is Lance who most people have #3 behind fields. And there are a lot of teams that might let him drop as he has limited tape. I'd say hold pat and take him if he is there. Or maybe even trade down a few spots at a time if no one trades up for Lance or Fields. I really like this year of QBs. And it would not surprise me in the least if for all the hype made about Trevor one of the other guys picks in the first round out plays him.

As a side note. I don't want to not mention Zach Wilson who is rising up boards fast. Though I don't know how i feel about him yet.
Last edited: Nov 23, 2020

Pat the Pats Fan said:
I want them to be competitive. losers tank....and that’s unwatchable to me....
Click to expand...

Play to win. Period. I look at this season in terms of Bill the Coach and Bill the GM's legacy. Bill is the best coach in the history of the nfl, BUT if he has a sub .500 season without Brady it gives his naysayers some ammo. Anti Bill media shoot down the 11-5 Cassell season with "it was an easy schedule!" "they didn't even make the playoffs!". Just wait for what's to come if the Pats go 6-10 this season. Also, I do not trust Bill the GM with a high draft pick given his abject drafting failures of the last 3 or 4 seasons...
S

FCB02062 said:
Play to win. Period. I look at this season in terms of Bill the Coach and Bill the GM's legacy. Bill is the best coach in the history of the nfl, BUT if he has a sub .500 season without Brady it gives his naysayers some ammo. Anti Bill media shoot down the 11-5 Cassell season with "it was an easy schedule!" "they didn't even make the playoffs!". Just wait for what's to come if the Pats go 6-10 this season. Also, I do not trust Bill the GM with a high draft pick given his abject drafting failures of the last 3 or 4 seasons...
Click to expand...