Pete Carroll was instructing Wagner during the timeout before the play. I wonder if Pete Carroll told Wagner to shoot that gap.
Click to expand...

He could have bounced outside and basically walked in the endzone. He had micro seconds to decide and just made a mistake that I wager wont occur again in a similar scenario.

Bottom line here is that the Patriots are going to be tough customers with Cam.

rochrist said:
That's nonsense. As I showed a few days ago, what he did in the playoffs that year was superior to anything done by either Antwain Smith OR Corey Dillon. He's was superb.
Click to expand...

I don't get the need to bash Sony so bad that they're willing to re-envision what they saw in 2018 and convince themselves they saw something else.

I was just going to post that....some pretty high praise for the kid.
P

Keyser Söze said:
I was just going to post that....some pretty high praise for the kid.
Click to expand...

I was stunned when he steamrolled the center, not once but twice, IIRC. Just put him on skates.
K

NG Pats Fan said:
Still waiting for Harry to break a single tackle for a nice YAC play or make one contested catch in the endzone. For someone that got by on his physicality and jump ball ability in college he has shown next to none of it so far. I do like that Cam is trying to force the issue and has his back when he messes up.
Click to expand...

He showed some of that physicality last year. My guess is that the shoulder injury is limiting him physically right now.
K

PP2 said:
I was stunned when he steamrolled the center, not once but twice, IIRC. Just put him on skates.
Click to expand...


I saw him destroy the left guard and a RB -- did he also blow up the center?
T

Froob said:
I mean he’s a big dude but he isn’t trucking people like he should.
Click to expand...

TheRainMaker said:
Gilmore had a rough night. Teams including the Pats had no business passing on Metcalf and he took it to the best CB in football last night.
Click to expand...

Please stop, you're embarrassing yourself with this. Take away the inch perfect pass and he had 3 catches for 38 yards.

Kasmir said:
I saw him destroy the left guard and a RB -- did he also blow up the center?
Click to expand...

I think it was the guard and RB. I did not see any clip of the center getting blown up.

Kasmir said:
He showed some of that physicality last year. My guess is that the shoulder injury is limiting him physically right now.
Click to expand...

Agreed on Harry. Also defenders have managed on several occasions to lunge at his feet and ankles through a blocker to take him down, sort of lucky plays defensively.
T

2020 Weekly NFL Picks Winner
Interesting comments coming out of the Seattle lockerroom...is is possible Belichick didn't want to tip his hand in case this situation comes up again against Seattle? Usually the Pats practice situation football, so I was expecting a better play call... 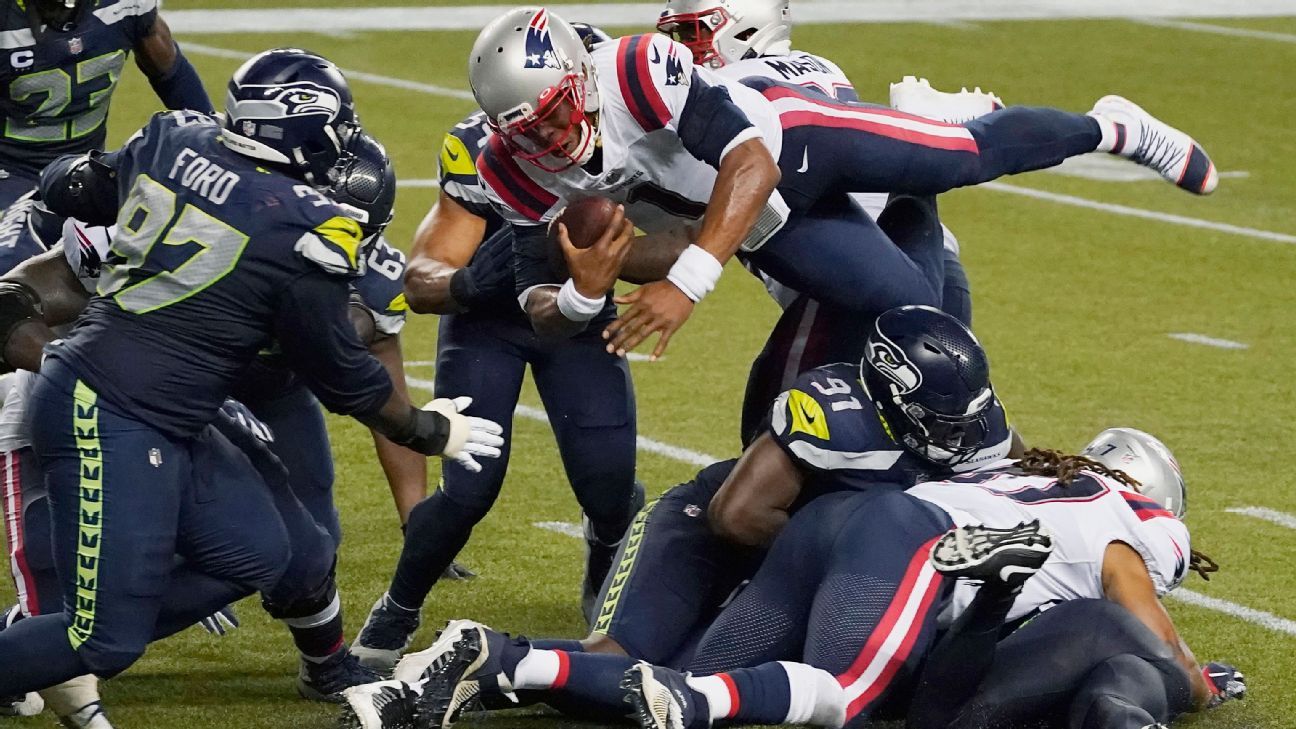 The Seahawks came up with the big stop against the Patriots, but injuries plus the ease in which New England moved the ball are concerning.

But Wagner knew where Newton was going.

"That ball's going right," safety Jamal Adams said after the game, relaying what Wagner told the defense in the huddle. "That ball was going straight right."

So Wagner made the call for Seattle's defensive line to slant in that direction. That put L.J. Collier, lined up at right defensive end, in perfect position to bring down Newton after splitting two blockers. Newton said afterward that he should have bounced outside instead of running straight into traffic that safety Lano Hill helped create when he took on fullback Jakob Johnson off the edge.

"They were running the same thing all game," Collier said. "Bobby came to us before that and said they were going to run the same play and that we were going to slant on it just to go with it. I really just followed my captain and went with him and we came up with a big-time play. So really, credit to [defensive coordinator Ken Norton Jr.], Bobby and the rest of the defense."
Click to expand...

Kasmir said:
I saw him destroy the left guard and a RB -- did he also blow up the center?
Click to expand...

That is what I thought I saw. Wouldn't be surprised if I was wrong.

Hey guys. Haven't been around for a while.

Been excited to see what we would look like with Cam under centre and he hasn't disappointed. Thought the offense looked really good on Sunday night and everyone played a part. Kudos to Josh for getting this thing rolling too.

If we can get some of these young receivers developed, this season will be fun as heck.

Onwenu has that feel of the next great Pats O-lineman from nowhere. Lost track of who is coaching the line with Dante retired, but they're doing a good job

Caretaker said:
True, but do you think Sony can bounce back this season, realistically? Or is he a JAG at this point
Click to expand...

I was responding in this case to the comment that any back could have filled his spot in 2018 and done as well. It's simply not true. Who knows what his problems are now. Injuries? Maybe his knee has given out?
S

Mahomes, Lamar, Watson and to a lesser extent Allen X 2 are obstacles coming up and facing Wilson already can only help.