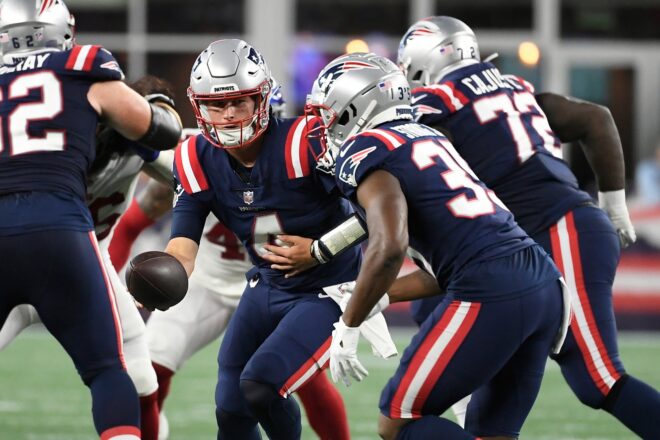 My expectation for this game was low due to the doom and gloom reports coming from Training Camp on the installation of the new zone blocking scheme.   The question I asked up front was if the Patriots’ Defense was really that good or was the Offense that bad?  The answer we got was a little of both but not nearly as bad as we have seen from the reports.  I think the defense might be pretty good!  At the very least the depth of the defense is going to be better.  When the Patriots lost many defenders to injury late last season the defense fell apart.  They may have more depth this season.  At least they will have more speed.

NE held out all their starters.  That was a total of 36 players with 4 injured and James White retiring.  The 2nd team’s Defense went up against the Giants’ starters including Daniel Jones, Saquan Barkley, and the improved Offensive Line.  They held their own and forced an FG on the Giants’ 1st drive.  I consider that a win.  Later in the 2nd Quarter, deep in Giants territory, on a 3rd and 1, Ronnie Perkins puts pressure on Giants QB Tyrod Taylor forcing an errant throw.   A 3 and out.  No, wait, a flag, holding against the Giants.  Ok, it was 3rd down we are off the field.  Not so fast.  Belichick accepts the penalty to make it 3rd and 12 at the Giants’ 19.  The decision backfires as the Giants complete a pass for the 1st down and then go on to score a TD.  Belichick would never do this in a real game.  Take away that TD and the Patriots would have actually won the game!

I didn’t like that the Giants were running the no-huddle offense in the middle of the game, in a pre-season game with backup players in the game.  Maybe Giants head coach Brian Daboll did us a favor.  We are going to see this a lot this year after the success the Bills had running this last year.  The No Huddle prevents the Patriots from making Defensive substitutions, which they are heavily dependent on.

Here are my observations:

James “Sweetfeet” White was the consummate Pro.  I regret being correct when I wrote this back in my Week 3 observations last year – “The James White injury seemed to be innocuous.  It wasn’t!  I am no doctor, but that looked like his femur got jammed into the hip socket.  Bo Jackson’s career ended on this type of injury.   Hoping for the best, especially for everything that White has gone through the last couple of years.  He only signed a 1-year show-me type of contract.  I did read that Dr. David Chao, a former NFL Doctor tweeted that it was a subluxation of the hip (partial dislocation).  This was similar to what happened to Tua Tagovailoa.  Expect White to be put on IR.  I hope he will be able to return, but he is likely gone for the year and his career might be in jeopardy.  He was sorely missed.”

White will forever be linked to the famous comeback against the Atlanta Falcons in Super Bowl LI.  These are his stats from the game:

110 Rushing Yards and another 39 Receiving.  He could have easily been named MVP.

Most Points, Game – 20 (three touchdowns and a two-point conversion)

He walks away after 8 years in the League with 3 Super Bowl rings.  White was also a team leader being named Team Captain for the first time in 2018.  That’s 4 years in a row.  Losing White is a big blow but the Patriots and Bill Belichick anticipated that White would not be back and drafted Pierre Strong and signed Ty Montgomery.

White was signed late this year and I believe he was signed so that he could have access to the Patriots’ facilities for working out and medical treatment.  White worked his butt off to come back.  He was there in the facility, while other players were off enjoying vacations.

This from Matthew Slater – “We all leave legacies one way or another… When I think about James White, I think he left a tremendous, tremendous legacy here.”  “All the things I hope to embody as a dad, a husband, a friend, James embodied.”

James White was instrumental in the development of both Damien Harris and Rhamondre Stevenson.  I also found it interesting that rookies Bailey Zappe and Tyquan Thornton started their post-game press conferences with glowing praise of White.  That’s how much he meant to the team.

This is a disputed stat, as I have seen three different totals on the number of fumbles White had in his career.  WBZ in the TV broadcast said he had zero fumbles.  ESPN has him fumbling 1 and Pro Football Reference has him for 2 for his career.  The bottom line is he didn’t turn the ball over.

Former Assumption Greyhound Football player and Peabody legend Mike Uva (You-Vah) is coming home to join the WBZ sports staff and cover the Patriots.  Uva is a two-time Emmy-winning journalist.   He broadcasts Gamecocks Central for All South Carolina athletics and will continue for the near term.  He even mentioned the Patriots’ draft pick, South Carolina’s Kevin Harris in his introductory spot during the WBZ pre-game show.   Mike has been a sportscaster for WACH Columbia SC and WXVT in Greenville MS from 2015 – 2019.  Since October 2021 he has been Director of Digital Content for GamecaockCentral.com.

How Was This Article?
Posted Under: 2022 Patriots Preseason
Tags: Patriots vs Giants