Wide receiver Malcolm Mitchell got a pretty impressive tattoo on his lower leg that shows the Lombardi Trophy after the Patriots Super Bowl win in Feb. The 2nd year wideout didn’t go the subtle route as he opted for a huge tattoo that covers his lower leg which he showed in a video as it unfolded. 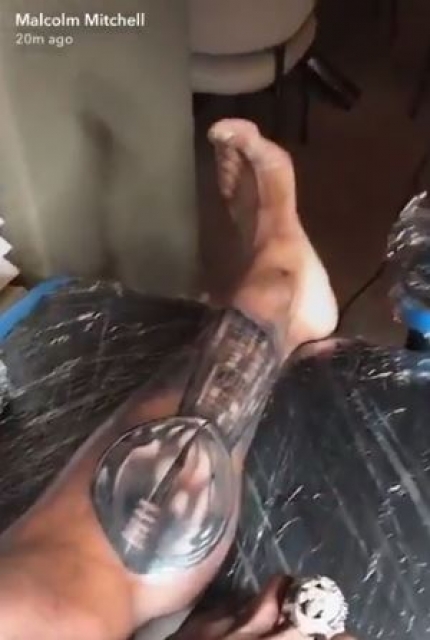 So Bill Belichick’s relatives fought in the Pequot War and helped found the towns of Burlington, Woburn etc. and the coach is a distant relation to both Clint Eastwood and the famous abolitionist John Brown who led a raid on the armory at Harper’s Ferry.

Thanks to the digging by the Boston Globe, we know all of these cool but ultimately unnecessary facts about the coach’s genealogy. But after the recent attempts to find dirt on the Patriots and Tom Brady, one has to question, what exactly were they looking for when starting this? Certainly not that Belichick is a distant relative of President William Howard Taft… right? Maybe not; perhaps we’re looking for the negativity where there isn’t any and it was just that…. a simple case of genealogy.

Did you get a chance to check out our Patriots Training Camp Primers from last week? It is a good way to learn a lot of the new faces that the team has brought in this offseason. Training camp begins on Thursday, hope to see a lot of you there. Our earlier evaluations looked at the:

Pats wide receiver Julian Edelman has had plenty of doubters in his time, (even here once upon a time) but he’s never flinched from believing in himself.

Edelman recently shared on his social media page a letter of apology he recently received from a freshman English teacher at the College of San Mateo. Edelman made it clear that he planned on making it to the NFL or as he put it, “going to the league.” His teacher dismissed him and made a remark about “setting realistic goals.” 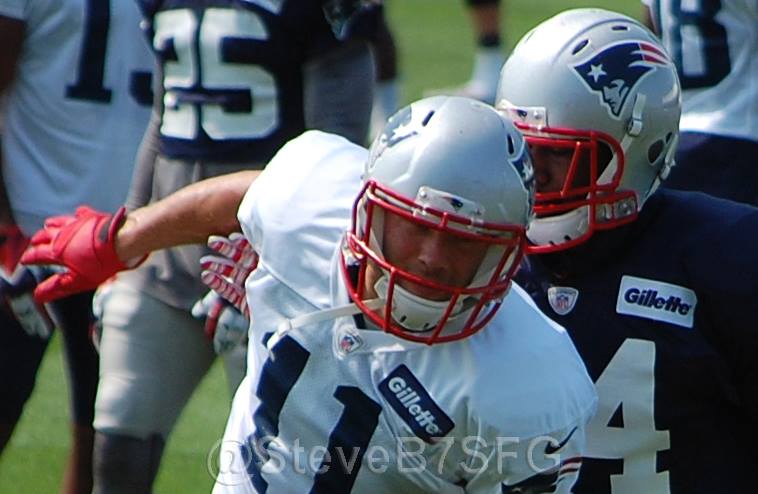 Julian Edelman received a letter from a college professor apologizing for telling him to set “realistic goals” in his freshman year. (SBalestrieri photo)

Edelman transferred to Kent State and went on to play three years as an option QB before getting drafted by the Patriots as a wide receiver. And we all know…the rest of the story as Paul Harvey would put it.

This little vignette shows that you can’t ever discount the size of a man’s heart. We’ve seen it with Tom Brady, Edelman and others. But the other thing is that this particular teacher is a keeper. Rare is it these days that anyone admits a mistake or an error. And for this person to pen a letter of apology means that San Mateo made a good choice there. Did he/she act a bit too quickly pooh-poohing Edelman’s dreams? Yes, but it was a lesson learned and the teacher was big enough to admit it. That’s a teacher I’d want for my kids.

Something Must Be in the Water 2…:

I’ll be so glad for training camp to start….but not for the usual reasons. Oh yes, a return to football which will be with us all from this Thursday until the Super Bowl in February is my favorite time of the year. But it seems every offseason is another time for the bored, delusional Brady haters to come out of the woodwork.

My emails, tweets, and DM mentions this week were filled with the latest carryings on by some individuals with their collective heads up their fourth point of contact. (That’s a paratrooper term that you can look up) And all of this while the players in the NFL voted him the #1 player in the league. Go figure.

I’ll be the first to admit that I was foolish enough to respond to a couple of these ridiculous rantings by the people who have nothing better to do than spend all of the days of the summer trying to make an excuse why Tom Brady isn’t this or that….yada, yada.

Then I took and I encourage you to take Bill Belichick’s advice, “Ignore the noise.” Brady’s brought his team to seven Super Bowls and won five of them and the team is primed with a deep roster for another one. So, this is the only way to quiet the haters. (Strong language)

The Juice is Loose:

It seems that O.J. Simpson is getting parole after serving nine years of a 33-year sentence. Simpson will be forced to live on his pension, $108,000 a year from the NFL as well as money he paid into the Screen Actor’s Guild, rumored to be more than $5 million and Social Security, which in his case would total out to be around $42,000 a year.

One of the more bizarre moments of his parole hearing was O.J. telling the judge that he’s always led a “conflict free life.”

In another not-so-surprising turn of events, Adam “Pacman” Jones of the Bengals was suspended for the season opener against Baltimore after he was arrested for kicking and headbutting a hotel employee that led to his arrest earlier this year.

Jones also had an altercation with the police during his arrest and told the arresting officer, SGT Jarrod Cotton, “ hope you die tomorrow.” This incident was the latest in a long string of off-field problems associated with the veteran cornerback who was suspended for violation of the league’s Personal Conduct Policy.

The Buffalo Bills are bringing in WR Anquan Boldin for a visit on Monday according to ESPN’s Dan Graziano. The 37-year old Boldin is long past the age where most wide receivers are retired and out of the league but Boldin continues to defy Father Time.

Last season he caught 67 passes for 584 yards and eight touchdowns for the Detroit Lions. Those are very solid numbers, for a player of his age, they are incredible. In his career Boldin has caught 1076 passes for 13,779 yards and 82 touchdowns in a very solid, long career with the Lions, Ravens, 49ers and the Arizona Cardinals.

Boldin would become an excellent possession receiver for Buffalo and can always be counted on to move the chains and excel in the red zone.

Miami beat writer Armando Salguero is reporting that the Dolphins’ sponsorship, which will be announced sometime next week, will also help pay for counseling, education and a workshop on concussions through a program run by the University of Miami Sports Medicine Institute and KiDZ Neuroscience Center at the Miami Project to Cure Paralysis. “It’s amazing and so proactive and intelligent of [the Dolphins],” said Dr. Gillian Hotz, the director of the University of Miami Sports Medicine Institute’s concussion program. “They’re loving their community like the community loves them. It’s a great partnership with the university, and it shows other teams around the country what they can do in their communities.”

This is a great move by the Dolphins organization to help the high schoolers of the Miami area, especially at a time where the increasing focus is on concussions in the sports world…even at the high school level.

Pressure is on the Jets’ Enunwa to Produce:
The New York Jets got a very productive season out of wide receiver Quincy Enunwa in 2016. He began his second season as the #3 WR on the depth chart but after the season ending injury to Eric Decker, he moved up to the #2 slot.

The Jets used him in a variety of ways last season, outside, in the slot and even on a few occasions as an H-back. He responded with a solid outing catching 58 passes for 857 yards and four touchdowns. And this was with the shaky play of the Jets QBs a year ago.

The one knock on his play has been his drops which he’ll look to cut down on in season #3 for Gang Green. But with Decker and top receiver Brandon Marshall gone this season, Enunwa will begin training camp as the Jets top wide receiver. He will be facing a lot different set of challenges this season because of that.

Follow me on Twitter @SteveB7SFG or email me at [email protected]
Listen to our Patriots 4th and 2 podcasts on blog talk radio as the writers Russ Goldman, Derek Havens and myself from PatsFans.com discuss the latest Patriots news Wednesdays at 12 noon.

By: Robert Alvarez
Linebacker Jahlani Tavai agrees to a two-year contract extension with the Patriots.
9 hours ago

By: Robert Alvarez
Devin McCourty will appear in his 200th career NFL game on Thursday night against the Buffalo Bills, Robert Kraft honors his milestone.
11 hours ago

By: Robert Alvarez
Robert Kraft lends the Patriots team plane to the University of Virginia so its players can attend the funerals of fallen teammates.
12 hours ago

By: Robert Alvarez
Sideline mic'd up sights and sounds during the New England Patriots' Week 12, thanksgiving matchup with the Minnesota Vikings.
12 hours ago