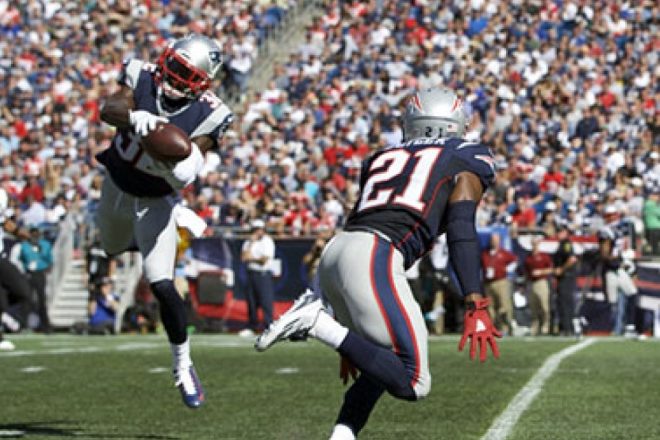 The Patriots head into training camp at the end of next week and there should be no shortage of competition at a number of spots. As a lead-in to the beginning of camp, we’ll break down the positions and give our take on who is a lock, a near lock for the 53-man roster and who is on the bubble. And we’re on to the Safeties.

So next up is the Patriots’ safety position. This spring the team had the good fortune and smarts to bring back safety Duron Harmon during free agency. The re-signing of, in essence, the third starter because he plays so many snaps was a win/win. Harmon has been the team’s third safety in their big nickel package and he’d fill in as the team’s center fielder and many times they’d move McCourty, who used to be a cornerback into the slot.

McCourty and Chung return and are a savvy pair of veterans. They both should be around for at least 2017 and possibly beyond. The team normally carries a few safeties as special teamers and this year will be no exception.

Roster Locks: Devin McCourty, Pat Chung, Duron Harmon
The team is in very good shape at safety to start the season as they have all three starters returning for 2017. McCourty is an excellent free safety and makes all the calls for the secondary as the quarterback back there. He’s a team captain and a leader, on and off the field.

Chung has been enjoying a career rejuvenation in his second stint with the Patriots. The coaches use him close to the line of scrimmage in the box where he’s much more effective. He terrific in run support, and like everyone else in the secondary, is a good tackler and is rarely out of position.

He’s physical and does a pretty good job of covering backs out of the backfield and tight ends close to the line of scrimmage. He’s a solid locker room guy and seems to be a popular teammate while being another quiet leader.

Bringing back Harmon on what is a pretty team-friendly deal was a great move. He was already essentially a starter with the number of snaps he’s played and he has a tremendous nose for the football. Harmon allows the Patriots to move McCourty around in the big nickel defense. He’s always making big plays at key times and is a very trusted player on the defense.

If McCourty were to miss any time with an injury, Harmon can be relied on to step in and do the job. Would he be able to make all the calls? That’s a question that we don’t know yet, but he’s another valuable piece of the defense.

On the Bubble: David Jones, Jordan Richards
The Patriots signed UDFA safety Jones from Richmond this spring and he may be a player for fans to keep an eye on this summer. He’s got very good size for a strong safety at 6’3, 210 pounds to be a backup and eventual replacement for Pat Chung. Playing a very physical position takes a toll and the Patriots need a reliable backup. 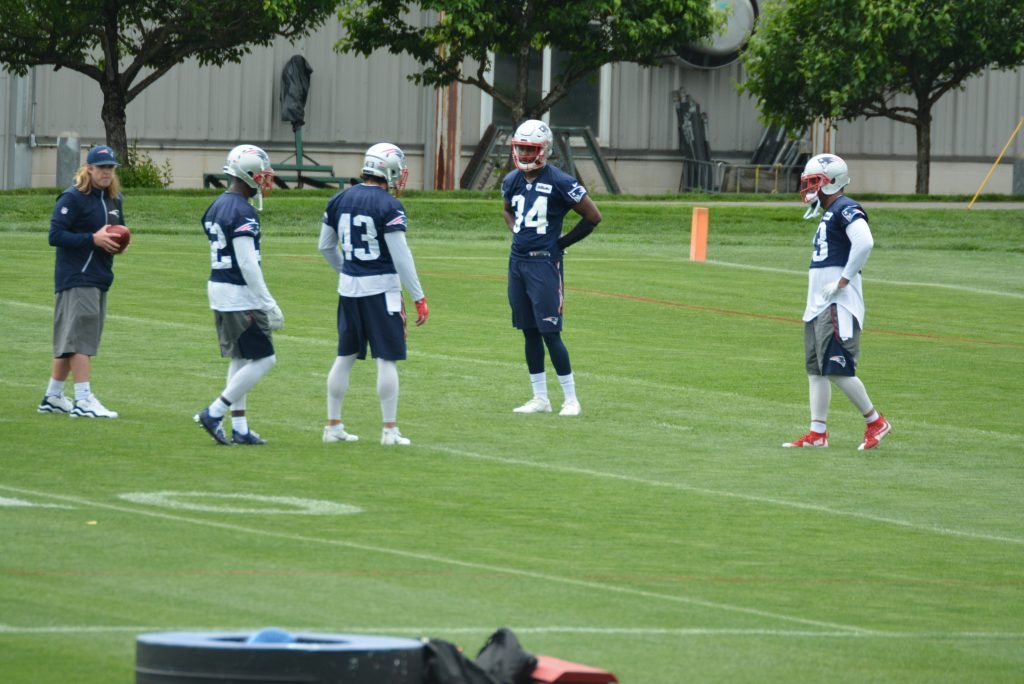 Keep an eye on David Jones (#34) this summer, here with the Patriots safeties and coach Steve Belichick. (SBalestrieri photo)

Jones is athletic for a big man and returned kicks and punts in college and got some work in the return game during the spring. The more you can do, the more valuable you are to the coaches. Watching him in our limited window this spring, he impressed in coverage against the backup receivers. Now when the pads come on Thursday, will be a big test.

Richards’ career is at a crossroads in just his third season. After being a high draft pick (2nd Round, 64th overall) in the 2015 NFL Draft, he hasn’t made an impact and was buried on the depth chart in his second season, when Bill Belichick says most players make a big jump in their development.

He’s looked stiff in the hips and hasn’t been able to stick with receivers. He played just 18 defensive snaps in 2016 and just a third of the special teams’ snaps a year ago. He’s going to have to earn his way on the roster this summer. Right now, and it is very early with a limited view, but I’d put Jones ahead of Richards, especially given his ability to be an impact STs player. This will be a positional battle to watch.

Outside Looking In… Long Shots: Damarius Travis, Jason Thompson
The Patriots signed Travis as a UDFA and he’s an in-the-box safety. He has decent size at 6’2, 210 but he too is a bit stiff in the hips and may be a liability in coverage at the NFL level. He does a very good job against the run and is considered a high character player and person. He has excellent special teams’ ability and led Minnesota with 17 special teams’ tackles.

Thompson is a long shot to make the roster but if he shows enough of special teams, he could stick or make the Patriots practice squad. He wasn’t a starter in college and switched from QB to safety. He’s got decent size at 6’2, 210, and ran a 4.44 in the 40-Yard Dash and logged a very impressive 6.57 time in the 3-Cone Drill which would have been second in the Combine.

So, before we have everyone reaching for cell phones and keyboards for our snubbing of Nate Ebner and Brandon King…you’ll just have to wait until tomorrow we post our Special Teams primer…