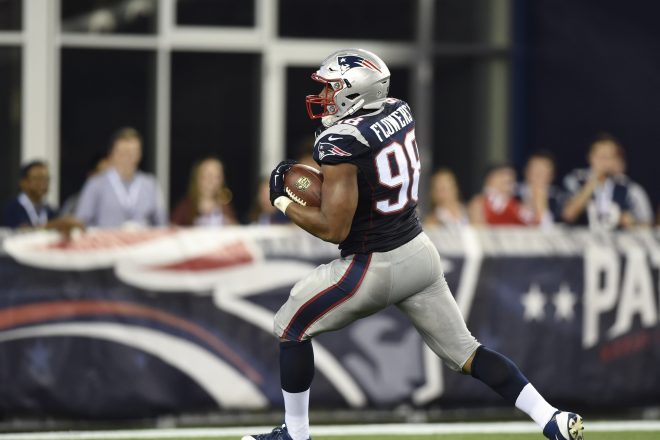 The Patriots head into training camp in ten days and there should be no shortage of competition at a number of spots. As a lead-in to the beginning of camp, we’ll break down the positions and give our take on who is a lock, a near lock for the 53-man roster and who is on the bubble. Next up on our primers is the Defensive Line position.

So, we’re going to look at the Patriots Defensive Line and how they shake out. There is much versatility here and that what makes the Patriots defense so effective. In a sack driven league, they’re rather pedestrian at them despite leading the league in points against in 2016. 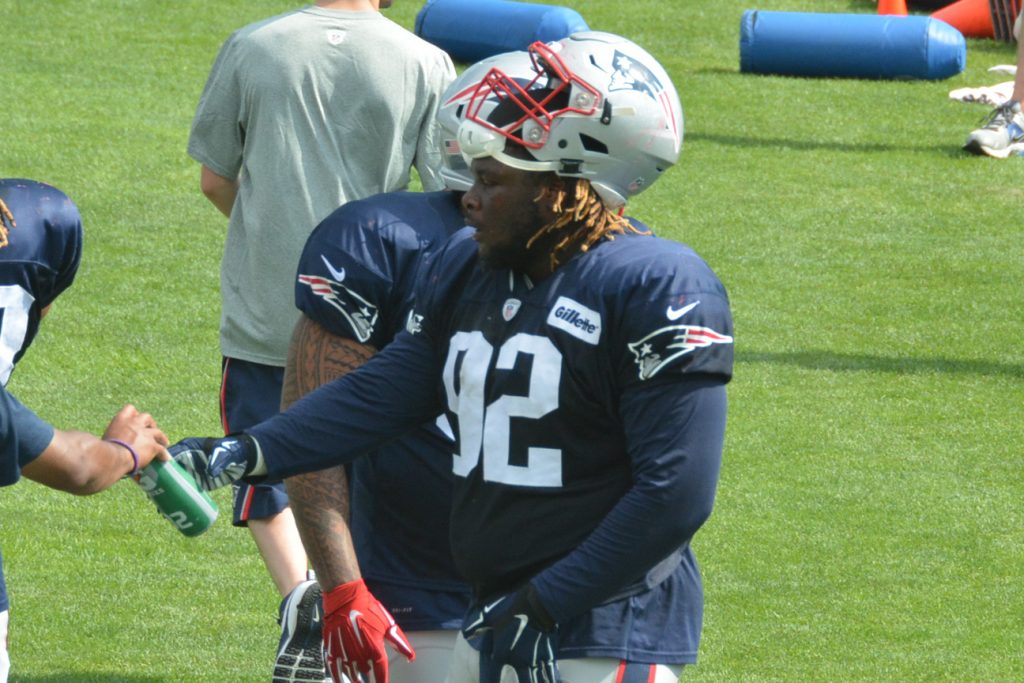 DL Malcom Brown will be expected to be more consistent in 2017. (SBalestrieri photo)

It wasn’t smoke and mirrors, the team uses a variety of different looks and squeezes offenses from running the ball and then with their pass rushers, do not let opponents out of the pocket where big plays tend to happen. They demand their edge players set the edge first, they’re not and have never been a “sell-out” pass rush team.

The team lost defensive ends, Jabaal Sheard and Chris Long, this spring but drafted two younger guys in Derek Rivers and Deatrich Wise while picking up Kony Ealy from the Panthers in a steal of a trade, during the NFL Draft. The team also picked up the versatile and underrated Lawrence Guy from Baltimore. Trey Flowers was arguably their best DL down the stretch and into the playoffs and Alan Branch was outstanding all season.

Everything starts with the big men in the middle and Branch and Brown were very good in 2016. Branch frequently plays over the center and is outstanding at stuffing the run. Brown is as well. Their job is to force everything outside where the defensive ends and linebackers are supposed to clean it up. They each got a little bit of push in the passing game but that is something that Brown could do a bit more of as well as be more consistent in 2017. 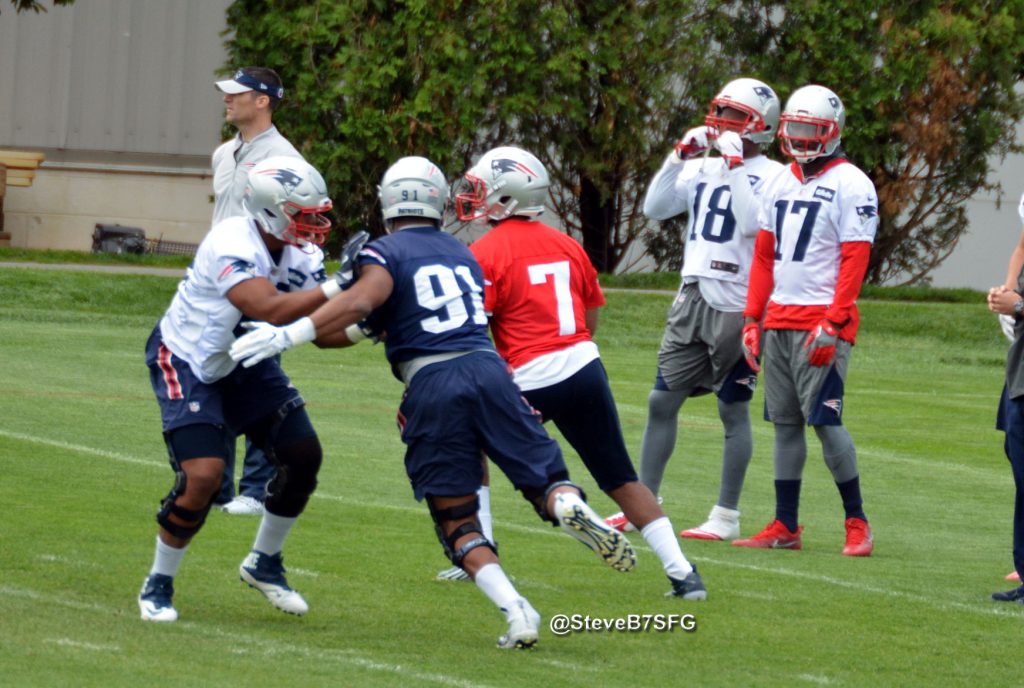 Ealy will be an intriguing guy to watch this year. He’s in a contract year and has been given a clean slate by the coaches in New England.  The biggest knock against him was that he didn’t buy in when he was in Carolina. He seems to be doing that right off the bat here, which is a good sign. When he’s on, he’s a difficult man to block. Just rewind to Super Bowl L and watch him against the Broncos.

Big things are expected of Flowers this season, and after the way he finished 2016, he seems to be the go-to guy in the pass rush. Flowers, like many others in the Pats defense, is versatile and can rush from the edge or push inside as an interior pass rusher.

Ninkovich is a guy who is always at his best in clutch situations. He may be losing a step but he’s another versatile guy who can line up as a defensive end or drop as an outside linebacker. 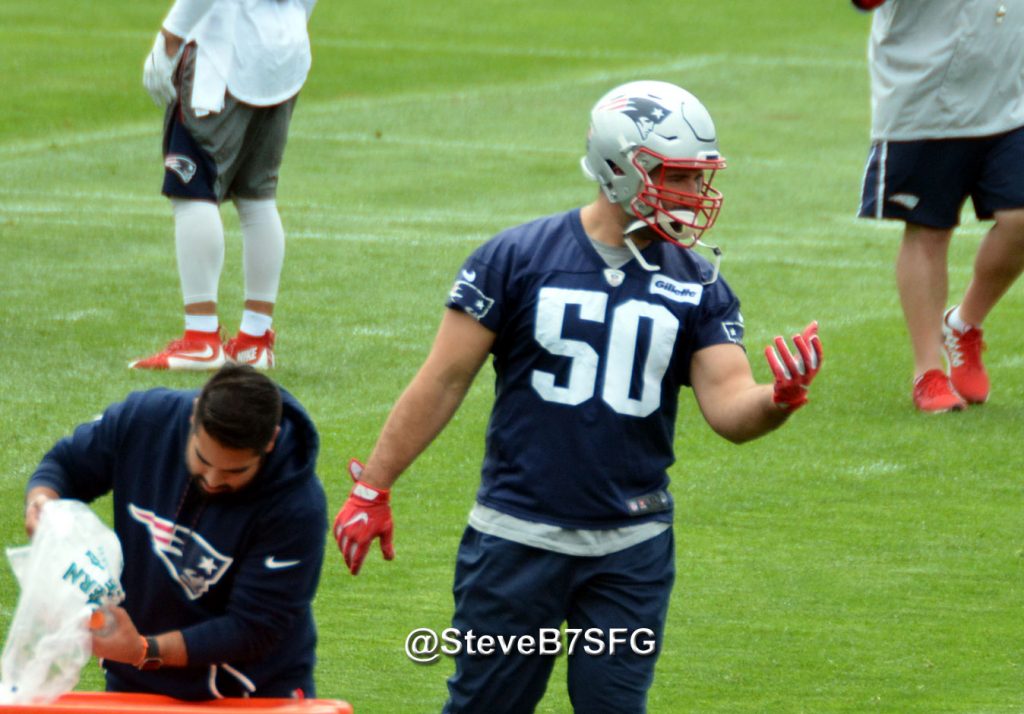 Rob Ninkovich has been a clutch performer for the Patriots defense. (SBalestrieri photo)

Rivers and Wise by virtue of their draft stock are untouchable this season. Rivers is another guy who can play DE or OLB and was the Patriots top draft choice this season. Wise is another big DE in the Patriots mold that is an edge setter first and a pass rusher second. He was hurt in his senior season in college but had a very impressive 2015.

With the depth listed above, these rookie edge players, they won’t have a ton of pressure put on them to produce much this season. They will be able to learn the defense, get used to the speed of the pro game and get some reps here and there.

Valentine showed some nice flashes last year in his rookie campaign. He’s another big body who can stuff the run on the inside. Guy is a versatile, movable piece and plays the 1-technique or out to the 5-technique. He seems like he’s going to be a nice fit in the Patriots defense. We’ll have to see if he can translate that to the field.

It is going to take some hard work from the guys below to unseat either of these two players. But stranger things have happened. Unless someone gets hurt or a case of the Foxboro Flu.

The clock is running out on Geneo Grissom. He’s a guy that was drafted ahead of Flowers and was thought to have all kinds of versatility. But it hasn’t happened for him, he’s been unable to make a dent in the defense. Hamilton made the team a year ago but with the addition of Guy from the Ravens, he’s going to have to turn it up… a lot.

Augusta is a big-body, run stuffer in the Vince Wilfork mold, he’s listed at 6’0, 335-pounds…which may be wishful thinking. Passing the conditioning test on Day 1 will be a tough task for the big man, who failed to complete a lap during minicamp…twice.

Butler is a definite under the radar guy. Signed as a UDFA from Vanderbilt, the 6’4, 305-pound DL can be a run-stuffing tackle or a penetrator from the interior on passing downs. He played OL in college before switching over. He’ll be a guy to watch to see if he can turn some heads.

Kilgo was drafted by Denver and appeared in 18 games in two seasons before being released last November. The Pats signed the big 6’3, 320 DL to the practice squad where he spent the remaining part of the season.

Our next primer will have the Patriots Linebackers… stay tuned.