2 weeks ago at 11:43 am ET
Follow @IanLogue
Posted Under: Patriots News 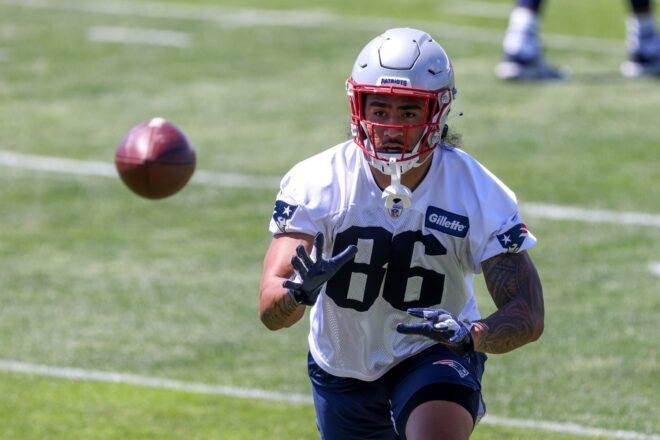 – Wednesday was a little more of a mild day as the New England Patriots continue working out the kinks on the offensive side of the football, with Mac Jones and company still adjusting as they transition to a new offense.  Following two straight days of padded practices, the players were back in just helmets and shoulder pads as the pace appeared a little slower than the previous sessions.   It was a better day for Jones, who missed just a couple of throws on the afternoon but the misses certainly had him frustrated.  One such play involved a throw to DeVante Parker that saw Parker stop short with the ball passing over his head and into the hands of Terrance Mitchell for the turnover.  There were also moments where Jones was spotted throwing up his hands out of frustration, so it’s clear there are still some things to get figured out.

– Bill Belichick said during his press conference yesterday that one of the reasons they went to a lighter practice was because they wanted to work on some things from an instructional standpoint, likely stemming from some of the miscues that happened over the previous two days.  “We’ll be in shells and try to clean up a few things from the last couple of days that need to be worked out and get back at it,” said Belichick.  “Last couple days of the week here and finish up in the stadium. This week’s rolling along, a lot of work to do, making progress but a long way to go. So just keep stringing these days together.”

– Rookie running back Kevin Harris has been a player who has seemed to get a few reps, with the standout from South Carolina showing nice hands during each of his opportunities.  Rhamondre Stevenson and Pierre Strong were both among players limited on Wednesday, which opened the door for Harris to get some additional work.

– Belichick had been asked about Harris prior to the session and said that both Harris and Strong will also need to earn a role on special teams when it comes to potentially earning a spot to be active on game days.  “Good, good. We do a lot more in the passing game than they did in South Carolina, but that’s pretty common,” said Belichick. “That’s the same thing for [Pierre] Strong. There’s just a lot more to the passing game in the NFL than there is in most colleges. So that’s been the big adjustment. Not that there aren’t changes in the running game but there are. Then I’d say the kicking game, that’s another area for players like that, that they need to have a role in, in order to help their opportunity to be active on game day and make the roster. Most of them haven’t done much of that. So, those are the two big areas for, I’d say most young players at that position.”

–  Brian Hoyer has remained sidelined, which has allowed Bailey Zappe to get a bigger workload.  After a rough few days, Zappe has come on as of late.  He missed just a handful of throws on Wednesday but had some good moments which included a 30-yard toss to Kristian Wilkerson, who made a nice play against Shaun Wade during 11-on-11s.  Obviously, it’s still early but it’s another reminder that with the 36-year-old Hoyer having missed so much time, developing a younger back-up will definitely be helpful moving forward.

– Devin Asiasi had another strong showing on Wednesday, despite a drop on a quick pass from Zappe.  But overall, he’s been consistent catching the football and has started to look like he’ll possibly be a factor and could potentially be a nice upgrade at the third tight end spot behind both Hunter Henry and Jonnu Smith.

– Meanwhile, Dalton Keene was among players not seen again on Wednesday, with Keene also having missed Tuesday’s session.  For a player with so much at stake, it likely doesn’t bode well for his future.

– Mack Wilson continues to do some good things, with Wilson having a fairly active showing that included a would-be sack on one play against Jones, which ended up being one of the final plays for the offense.  Oddly enough, Belichick had some good things to saw about Wilson prior to the practice.  “Mack’s done a good job for us,” said Belichick. “He came in the spring, he was really an outstanding worker all spring and learned some different things that we do here. But he’s adaptive well. He’s been productive on defense and in the kicking game so far. We look forward to seeing him out there.”

– With the team having guys limited at running back, Ty Montgomery also had some additional opportunities and he’s been impressive.  Quite a few people believe that Montgomery is making a strong case to replace the role former running back Brandon Bolden held on special teams as well as on the depth chart at running back.  They remain incredibly deep, with some difficult decisions likely coming in the weeks ahead.

– One highlight from Wednesday included the fact that as Nick Folk continued working on the practice fields, his four children were reportedly on hand to help out, with each wearing their dad’s jersey.  As Folk kicked some short field goals, they each retrieved and brought them back in what was a well-oiled machine.  Needless to say, anyone wondering what the secret to his success might be got a little insight to that after seeing the family at work.

The Patriots are now just one week away from their first preseason game, with the Giants set to visit next Thursday night at 7:00pm at Gillette Stadium.

By: Robert Alvarez
The best social media postings from the New England Patriots first preseason game against the New York Giants.
10 hours ago 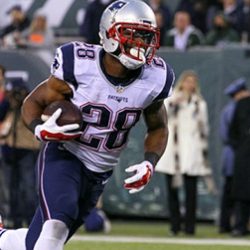 By: Robert Alvarez
The best social media postings honoring James White following his decision to retire from the NFL after eight seasons.
11 hours ago

By: Steve Balestrieri
QB Tom Brady on James White: "Teammate, champion, football player through and through. Congrats on the perfect career @sweetfeet."
21 hours ago

By: Russ Goldman
In this episode, Derek and Steve breakdown the Patriots Pre-Season Opener and discuss the latest team news.
2 days ago

By: Mark Morse
My expectation for this game was low due to the doom and gloom reports coming from Training Camp on the installation of the new zone…
3 days ago
wpDiscuz