Deshaun Watson? (UPDATED: Caserio Says Team Has "no interest" in trading him)

I don't think the Texans would even want Gilmore especially if they are trading their QB and going into full rebuild mode. No point in taking an aging high dollar corner.
C

carmelo15 said:
15 for Watson some people man
Click to expand...

Maybe it's a typo and he meant 15 first round picks.

We could never get him. We could throwaway this and the next two years of firsts and seconds and it probably wouldn’t get the deal done. An elite franchise QB is the most valuable commodity in this league. A young one even more so.
N

Dolphins make sense. Send them their own pick back (#4?) and their own first (20-something?) and that is a good START to a deal. Texans would then have two top 10 picks and a third late-first to draft 3 (hopefully) impact players. OR if they like Tua, trade Tua + #4 + original dolphins #1 + some other picks

he is coming off a being a bit of a primadonna..
C

So one of the Best QBs in the game for the third best QB in this draft. Even with Tua, I'm not interested If I'm the Texans GM. I know he is still young, but I have seen nothing from him that makes me believe he is capable of becoming a franchise QB. I think his ceiling is middle of the pack type QB. When Ryan Fitzpatrick steps in and the offense gets markedly better, that is not a flattering statement on your abilities as a QB. And the Dolphins are not going to be picking in the top ten again anytime soon. So, outside of the #4 pick this year what do those draft picks really get you? Especially if Watson is there elevating the team's win total, probably making them a playoff team.
C

There really is no trade for Watson at this point that makes any sense. That doesn't mean that one or two teams couldn't do something stupid and complete a trade that doesn't make any sense. But that's highly unlikely given that we are talking about a franchise QB. Arguably the most valuable commodity in all of sports.

NormZauchin said:
Too much money to tie up at the quarterback position. Watson isn't Brady and the cost would be higher.
Click to expand...

Any decent QB is going to cost more than Brady. The days of team friendly deals are over.

notex said:
Why the F would a player be involved with hiring a GM???
Click to expand...

The last guy left, partly, because he was "just an employee". He had a little bit of a cache. This kid is going to have input in the GM? yeah, ok.

BaconGrundleCandy said:
I would be absolutely shocked if Houston dealt Watson.
Click to expand...

Casario's first job will be to smooth this situation out. IMO, Watson's not going anywhere.

robertweathers said:
he is coming off a being a bit of a primadonna..
Click to expand...

Can’t blame him, this Easterby **** is crazy. Sounds like they’d pick Easterby over Watson.

Staff member
PatsFans.com Supporter
IMO I think a trade with Miami might actually make sense... They could trade #3 and #18 plus a 2nd, and then also trade Tua for a #1 + more elsewhere. So Miami still gets a first rounder and more but an upgrade at QB (IMO). Meanwhile Houston can replace Watson with the #3 getting a high quality QB. Or they could just take Tua if they like him. The cap hit of trading Watson is less painful if a rookie salary is replacing him.

sb1 said:
If O'Brien was still there - think he'd take Stidham and Harry for Watson?
Click to expand...

Probably have to throw in Michel
N

At the end of the day as a player you are an EMPLOYEE. I'd be more worried if they HAD asked Watson for input on the GM/Coach. How about Watson focuses on what he can control - on the field. No idea how players got so entitled.
S 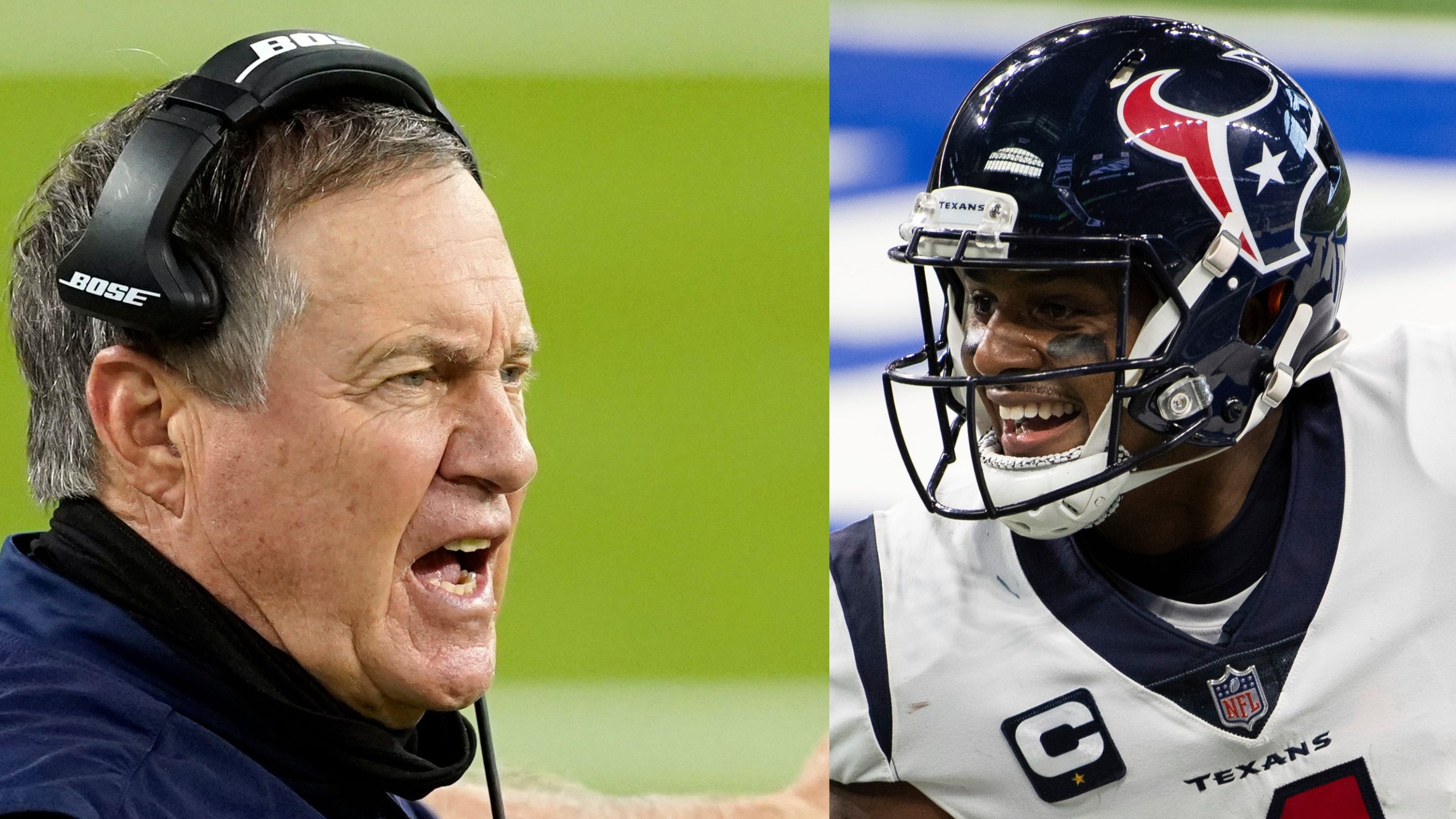 Should the Patriots try to trade for Watson? Yes. Should they trade Belichick for him? Yes?

If the QB truly wants out of Houston, New England would be foolish not to give up whatever it takes to get him — including their legendary head coach.
www.providencejournal.com
R

Delicate Genius said:
But only $5.4M if he's traded after June 1.
Click to expand...

edit: I guess that’s if he is cut. But the acquiring team will have 40 mill+ cap hits in 22 and 23.
Given what’s going to happen to the cap in 21 and the likelihood that even more revenues may be lost in 21 the 22 cap may shrink even further.
R

SVN said:
here is brilliant idea which i know at least one person here will like

Should the Patriots try to trade for Watson? Yes. Should they trade Belichick for him? Yes?

If the QB truly wants out of Houston, New England would be foolish not to give up whatever it takes to get him — including their legendary head coach.
www.providencejournal.com
Click to expand...

The guy has 1 career playoff win.

BB go work under his former assistant GM? lol he wouldn't go. Who would take over? Josh? No thanks!
R

Tottie said:
BB go work under his former assistant GM? lol he wouldn't go. Who would take over? Josh? No thanks!
Click to expand...

Did you read the article? It reads like it was written by an 11 year old madden player.

Ring 6 said:
Did you read the article? It reads like it was written by an 11 year old madden player.
Click to expand...

Nah I didn't I read your post and laughed. No way that ever happens I agree with you.

We by no means have the supporting cast for Watson.