What would your preferred OL be? 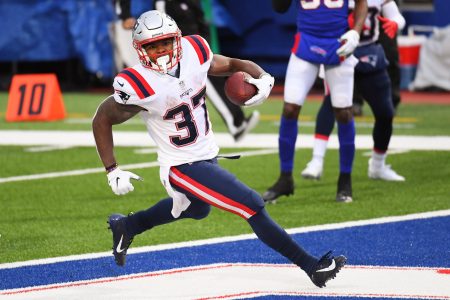 VIDEO: Damien Harris' Road to the NFL | The Journey: Episode 1
By: Robert Alvarez

PatsFans.com Supporter
Given all the moves the Pats have made, who would you want to have as the starting OL in Week 1?

I think most people would agree that the starters at C and RG should be Andrews and Mason (who is actually younger than Thuney). So that leaves LT, LG, and RT.

Wynn has played LT. I will note that many people here have suggested he could/should play LG, although Scar himself said he viewed Wynn as tackle.

Brown can play either tackle spot; he played LT in 2018, but has also played RT for the 49ers and Raiders.

Onwenu has been a standout at LG and RT. He's played well at both positions.

So I see the two main options as Wynn–Onwenu–Andrews–Mason–Brown and Brown–Wynn–Andrews–Mason–Onwenu. Which one do you think is better? Or do you have another idea?

The fact that we have so many options tells me that BB is going to try a number of them. And mix Karras in there late in games where a pair of fresh legs can make a huge difference.

Ultimately we'll probably spend the first 4 games or so mad sciencing in multiple positions, since we've got so much new blood on the roster. I think we'll see a few really unique combinations.

Reason:
- Trent Brown won a ring as starting left tackle in New England. He's an elite pass blocker, a better pass blocker than run blocker.
- Wynn has skills but extremely injury prone and the least reliable starter among the 5. Very high chance he gets nicked up then you ruin OLine continuity constantly changing people around to compensate Wynn out. Wynn played LG at Georgia and was good there.
- Onwenu was a total stud at RT last season, starting 12 games there. He's also a beast run blocker and at RT you want someone in the power running game who is an elite run blocker. Trent Brown is a gentle giant suited for LT and Brown isn't a mean run blocker. Onwenu is best suited at the more important RT spot compared to LG.

PatsFans.com Supporter
Might be easiest question (even though it's not a question in Foxo) about the team. Wynn - Onwenu - Andrews - Mason - Brown. Add a little depth and that's as good a OL we had in a while. Potential is as good as it's been here.

PatsFans.com Supporter
How about: Brown, Onwenu, Andrews, Mason, and Wynn?

Two biggest guys on the left side....
L

I voted for Wynn - Onwenu - Andrews - Mason - Brown because it’s the version with the least position change.

Wynn stays at LT. Wynn’s problem is availability but when is on the field healthy he is a great LT.

Onwenu at LG. He was great at RT last year but I think that the Patriots still view him as a G. Bill put him a RT because we had a hole here last year and it wouldn’t be the first time that Bill played a player at a position in his rookie season and played him in another after that.

Andrews and Mason stays at their position.

Brown at RT. When Brown is in the zone, he is one of the best or the best RT in football. He played RT all his career except the one year in NE where we had a gaping hole at LT after Wynn injury. It worked that year but with all the other OL we have I think it’s best to play him at his natural position.

Staff member
PatsFans.com Supporter
Great flexibility on this line, but the more I think about it, I think it has to be:

Onwenu-Herron-Mason-Edelman-Brown is my preferred line, personally.

While I enjoy Wynn much more than most posters, his dependability hasn’t been golden. And Brown has missed time as well over the years. So, don’t be surprised to see this one at some point :
Wynn OR Brown - Karras-Andrews-Mason-O

PatsFans.com Supporter
This idiotic narrative of Wynn as a guard just doesn't stop.

PatsFans.com Supporter
Like most reasonable people, I voted Wynn-Onwenu-Andrews-Mason-Brown. However, there's a third option I think is more possible than the classic "duhhhh Wynn is a guard because short" proposal. Just put Brown at LT and Wynn at RT if you like Brown at LT so much. Wynn actually sustained his first long-term injury as a Patriot while playing RT in the preseason, and he looked pretty good in the brief moments before he went down.

At least there's a tiny amount of NFL precedent for playing Wynn at RT whereas there's none (except for college) for playing him at guard.

Brown is an excellent tackle but he has played RT for most of his career. He was great with Brady but that was also a year in which Brady was getting rid of the ball lightning fast as we returned to our short pass offense since we lacked a downfield threat.

I'd keep him at RT where he has played for a longtime, and also Wynn at LT, where he has been excellent when healthy. Wynn is still a relatively young player with only 2 seasons worth of logged games. It makes no sense to move him from a position where he has excelled.

PatsFans.com Supporter
The fact is that in the running game, for whatever reason, most team are right handed. The other factor is that Trent Brown could be the most impactful OT in the run game in the league Teaming him, Mason and Henry together on the right side would present severe difficulties for most NFL defenses, even those with bad RB's

Wynn, Onwenu, Andrews, Mason and Brown is the clear choice. Then if Wynn gets hurt you can move Brown there and sub with a lot of combinations at RT like Herron, Cajuste or Elumanour or even Onwenu at RT with Karras at LG. So in my mind the initial solution is l clear, but the only question should be how would the Pats react to an injury situation with Wynn. Well find out at camp

luuked said:
This idiotic narrative of Wynn as a guard just doesn't stop.

PatsFans.com Supporter
When he played guard, Owenu was dominant on the level of Nelson by pass blocking metrics & a highlight reel as a road grader. Reiss tweeted that the team thinks he has all-pro potential at left guard.

The line falls into place based on that IMO.

BTW Bruce Armstrong was drafted in the same spot as Wynn (23rd), missed 8 games in 13 years and was just a stud LT (palyed RT for the first 3 years). Because he retired after the 2000 season he doesn't get the reckognition he deserves.

It is a total clownshow. But please lets all act shocked when for the fourth year in a row Wynn will take the LT spot.

And we will have the same group of bozos say the same thing again next year if we pick up his option or extend him. It will never end because y'all can't accept that Occam's Razor exists.

luuked said:
This idiotic narrative of Wynn as a guard just doesn't stop.

Sure, It’s a done deal. Let’s just close the thread and end all discussion on a message board with a topic that asked what people preferred.

Never mind the fact that the Patriots won a super bowl with Trent Brown as the LT. Yeah, Yeah, I know it was with Brady and Scar, oh, and you’re supposed to have your most athletic lineman play LT which would be Wynn by a country mile. We’re not all rocket scientists but I think the discussion is open for debate. Some posters don’t have all the knowledge and know and are educated by some posters replies here.

Btw, I pretty much agree with your preferred line but I can defintely see the op’s question as being valid because of all the personal versatility.
You must log in or register to reply here.