"Harry slowed down and didn't go up with two hands. He could have caught it in the corner of the end zone. " I hope he succeeds. We shall see.

TheRainMaker said:
Which was why he dropped in the draft. Dez Bryant, Kennan Allen, Allen Robinson, Anquan Boldin and Greg Jennings to name a few had those questions when getting drafted. I don't think anyone envisioned Harry to bomb the way he did.
Click to expand...

Yeah... Just don't buy the "N'Keal lacked athleticism" take. He's football dumb, he is softer than a poached egg... talent he has in spades. Same with Chad Jackson, he was easily the most talented WR in his draft class.

What's between the ears and in the heart matters a lot in a league full of talented people.
B 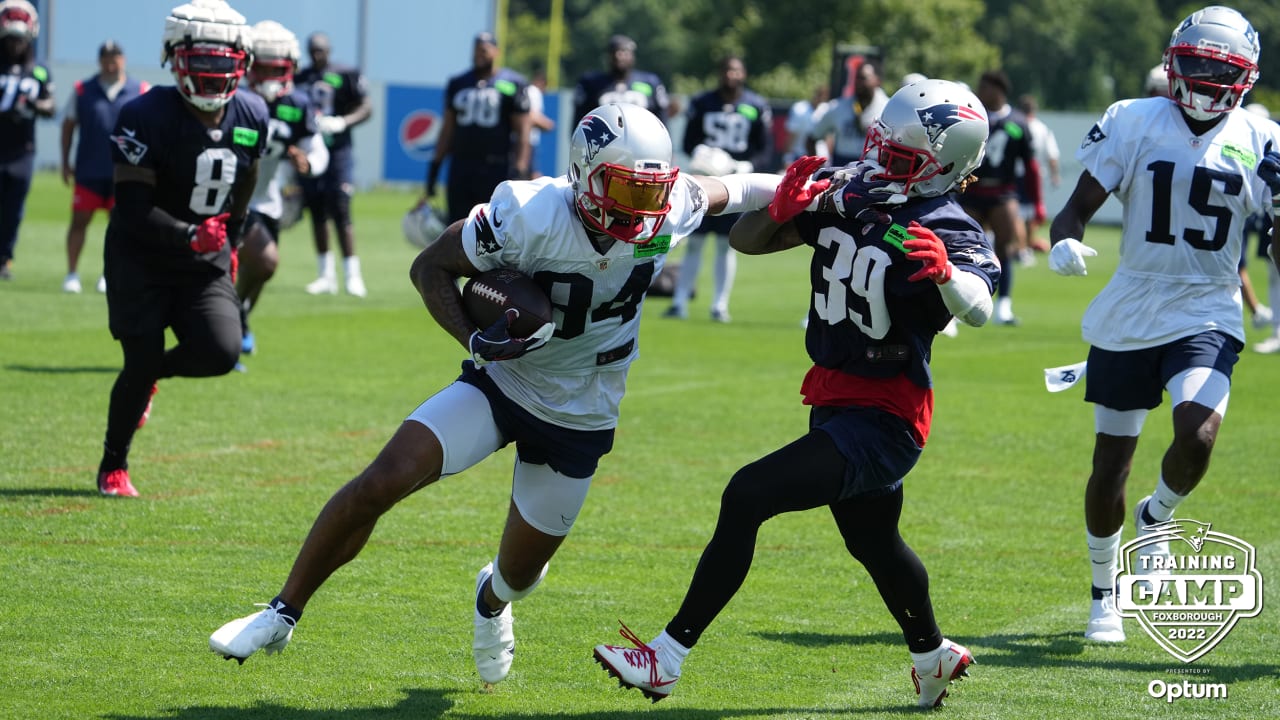 View photos of the Patriots during the seventh day of Training Camp on Wednesday, August 3, 2022.

PatsFan2 said:
That picture of Barmore really makes me wonder why we passed Travis Jones so many times in the Draft...what could have been. I guess Davon Godknows is the second coming.
Click to expand...


Because the team decided they wanted Tyquan Thornton and Mac Jones together for 4 years. I love Travis Jones, but if Thornton keeps popping the team might have been right.

PatsFans.com Supporter
Another one tomorrow and then you get a reprieve for the rest of the week from my twitter bombing...

Hambright is a surprise only to those who didn't bother watch him play for the Bears.

The only surprise was he signed a futures deal (= zero gtd) so hopefully he can stay healthy bc this OL will need him.

TheRainMaker said:
Which was why he dropped in the draft. Dez Bryant, Kennan Allen, Allen Robinson, Anquan Boldin and Greg Jennings to name a few had those questions when getting drafted. I don't think anyone envisioned Harry to bomb the way he did.
Click to expand...

No real thoughts, good or bad, after he was drafted... but I knew it was over for Harry after Tom Curran tag him as a Water Cooler guy...
B

long distance said:
Hambright is a surprise only to those who didn't bother watch him play for the Bears.
Click to expand...

Who in the hell watched him play for the Bears? That's a level of masochism I can't wrap my feeble brain around

Brandon_Cox said:
Who in the hell watched him play for the Bears? That's a level of masochism I can't wrap my feeble brain around
Click to expand...


I agree. "To those that did not bother watch him play for the Bears"? Who would that include? Like everyone?
K

One-If-By-Sea said:
Because the team decided they wanted Tyquan Thornton and Mac Jones together for 4 years. I love Travis Jones, but if Thornton keeps popping the team might have been right.
Click to expand...

I'm still staggered that Tyquan recorded a 1.41s 10 yard split at the combine. I can find only one other sub 1.5s 10 yard split, turned in by DK Metcalf at 1.48s. So Metcalf has extraordinary acceleration, not just straight line speed, which may explain his success despite a "bad" 3-cone. And Tyquan beats him with a 1.41s??? Even if Tyquan's 10 yd split is a measurement error, he is still one of the fastest accelerating players in league history.

2021 Weekly NFL Picks Winner
Why won’t the Harry talk ever go away?….is there a way to ignore posts that contain the word “Harry”? Asking for a friend. Haha

PatsFan2 said:
Ty Montgomery how many times have we hard his name already this TC?? Too much Is he another Dion Lewis??
Click to expand...

jlu52 said:
If Dante hasn't yet, I hope he visits and imparts some critical and helpful analysis for our coaches. I agree fully about the dedicated line coach. Perhaps Yates can grow into the job.
Click to expand...


My concern for Yates is that he didn't have Dante mentoring him on how to pass along the information.
Things went to pot last year with the O-line when why have to part ways with Cole Popovich. I had hoped they'd bring him back, but he went to Troy. If they hadn't brought him back. I was hoping they'd reach out to one of the younger O-line coaches in D1 who had been developing players.
If the O-line doesn't solidify, it won't matter what weapons that Jones has.

RobertWeathers said:
Well, there are 3 coaches on the staff who were either mentored or coached by Scar who are working directly with the online.


Patricia spent 2 seasons as an offensive assistant with him
Yates spent several seasons LEARNING, but learning is different than teaching.

Who is the 3rd coach?

All 3 blocked punts were the fault of the blocking in front of Bailey. 4 of the guys from the Punt Pro unit are gone in Collins, Bolden, King, Olszewski. So that unit will have an overhaul beyond Cardona, Bailey, Slater, Justin Bethel and Cody Davis.

Zuma said:
I was 100% sure at DT/NT would have been drafted in the top 3 rounds. Maybe God is better then we think. We shall see. And Carl Davis is a bad man who has the size but either is hurt most of the time or just can't put it together.
Click to expand...

There is also Ekuale who has shown flashes.

Wozzy said:
Hambright has played guard in the NFL to date, but he's also 6'4" tall and has an okay wingspan, he can possibly work as a backup guard/tackle swingman.

I think between Dejarlais, Hambright and Russell they have a lot of quality interior depth, though it sounds like Russey may need some seasoning on the practice squad. A dark horse to make Wynn redundant is either Herron or because they want to move Onwenu to RT.

After Trent Brown, Onwenu has the longest arms and wingspan on the entire offensive line... longer than Wynn's by a lot.
Click to expand...


After Brown, Strange, Andrews, Onwenu, and Wynn, there are questions.
Herron is the likely top swing tackle.

The fact that Hambright got some first team reps at RG for Onwenu is a good thing. But I don't think the Pats can go with a dedicated guard amongst the reserves. Gotta being either an OG/OT or OG/OC.

Russey is in a tough position. Probably the 3rd hardest behind TE and QB. I'm hoping he's spending every moment he can with Andrews and Yates to improve.

It would be REALLY nice to see the team develop another guy like Yates. Who could play OC/OG or RT.
It's disappointing that Hines and Stueber are still out.

It's interesting we haven't heard anything on Desjarlais or Will Sherman yet.

If Ty Montgomery is a smart Cordarelle Patterson, then I'll certainly take that.
Just as I'm sure Ty Montgomery would gladly take some of Patterson's speed.
T

In all this melee, why are we not hearing much about Cole strange ... Reading other reports looks like booth and Travis Jones are having a solid camp.

I hope strange also surprises us and we get a solid guard . But first round for a guard seems like an outreach .
You must log in or register to reply here.