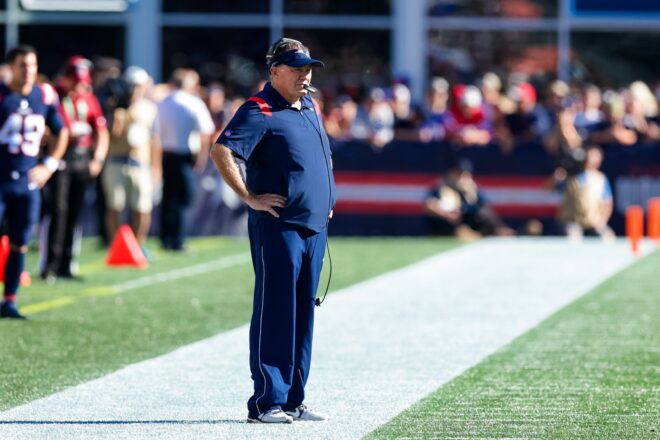 1) The NFL released the entire league schedule on Thursday night, which followed a day that saw numerous leaks and rumors on how things might play out.  By the time 8pm finally hit, the entire season was unveiled and we now know what the 2022 New England Patriots Regular Season Schedule looks like, and it’s not pretty.

They’re on the schedule to play five prime-time games this season, including four straight weeks of nighttime games that begin with a Thanksgiving evening game out in Minnesota against the Vikings on 11/24.  They then come home to play another Thursday night football against Buffalo, followed by a trip out to the desert the next week to play the Cardinals on Monday night football.  That one is followed by a trip to nearby Las Vegas to take on Josh McDaniels and the Raiders the next weekend on Sunday night football.

If history is any indication, the trip to Arizona and Las Vegas will likely include an extended road trip, where they’ll likely do as they’ve done in the past and stay out there for those two weeks.

The two straight weeks of Thursday night games were a surprise, with the only saving grace being that the team will get a bit of an extended break after their second Thursday night contest, which comes against the Bills, before their two-game stretch begins out in the desert against the Cardinals 11 days later on Monday night football.

The start of the season isn’t any easier.  New England opens up on the road for two straight weeks, opening the season down in Miami against the Dolphins in a 1:00pm game, followed by a trip to Pittsburgh the next Sunday to take on the Steelers at Heinz Field.  The trip down to Miami to start the year is sure to be a difficult one, as the heat and humidity have been an issue in early September when the Patriots have had to go to Florida, so it’s likely that it will potentially be challenging this time around as well.

They’ll finally play at Gillette Stadium in Week 3, with the Ravens coming in for a visit with a 1:00pm start.  But then it’s back out on the road to face Aaron Rodgers and the Packers in Week 4 in a 4:25pm ET match-up, followed by a home game against the Lions (1:00pm start), and then a trip out to Cleveland to take on the Browns (1:00pm start).

New England will then play its first prime-time game of the year against the Bears on Monday night football at Gillette Stadium.

From there, it’s a trip down to New Jersey to take on the Jets for the first time this season in another 1:00pm start, followed by a home game against the Colts in Week 9 (1:00pm start).

The bye week comes in Week 10, essentially right in the middle of the season.  After that, things kick off at home against the Jets in what will be their second meeting with them in three weeks, followed by their Thanksgiving game against Minnesota as their four prime-time run of games begins.

Fortunately, after the Patriots get done with being out west, they come home for two straight weeks, taking on the Bengals on Christmas Eve, followed by a New Year’s day game against the Dolphins.  They’ll finish the season off on the road against Buffalo the next weekend, which could potentially hold both AFC East and postseason implications, with the date and time for that game yet to be determined.

All-in-all, the schedule makers certainly weren’t kind to this year’s team, with that late-season run of primetime games sure to be irritating Bill Belichick after seeing the news.  It will be a challenging stretch, to say the least, but hopefully, they’ll be up for it.

2) There was some sad news on Thursday night, with former Patriots player and radio broadcaster Gino Cappelletti passing away at the age of 89.

Cappelletti was an original member of the Boston Patriots in 1960 and held two roles during his football career as both a wide receiver and a placekicker.  Even now, he’s still third on the team’s all-time scoring list, with his point total of 1100 and his 170 field goals both seeing him hold the record as the AFL’s all-time scoring leader.

He also holds the Patriots single-game record for points in a game with 28, and he was inducted into the club’s Hall of Fame in 1992, becoming just the second player at the time behind John Hannah to earn that honor.

But for those of us who weren’t able to see him as a player, it’s probably safe to say if you’ve followed this team for the last 20-years, you likely heard his voice on the radio.  Cappelletti eventually moved on to the broadcast booth and was part of a duo with the late Gil Santos that was certainly one of the best ever here in New England.  The two had some memorable calls, including quite a few that came during the club’s early championship seasons.

“My heart aches after learning of Gino Cappelletti’s passing this morning,” said Robert Kraft in a statement released by the team. “For the first 51 years of this franchise’s history, Gino contributed as an all-star player, assistant coach and broadcaster. You couldn’t be a Patriots fan during that era and not be a fan of Gino’s. The Patriots have had many iconic, fan-favorite players over the years. Gino was the first. I remember watching him play in 1960 and throughout his career.”

“He was one of the AFL’s biggest stars, becoming the first Patriots player to earn league MVP honors and retiring as the league’s all-time leading scorer. He became the second player in franchise history to earn Patriots Hall of Fame induction and I will always believe he deserves to be in the Pro Football Hall of Fame. As great of a player as he was, he was an even better person and storyteller.”

“On behalf of my family and the entire Patriots organization, we extend our heartfelt condolences to Gino’s wife, Sandy, their three daughters, Gina, Cara and Christina, and their 10 grandchildren, as well as the many others who will be mourning his loss.”

The club posted a nice tribute to Cappelletti in remembrance of him in the video below, which is definitely worth watching:

3) Coming out of the NFL Draft, one of the topics of conversations centered around the troubled past of rookie 4th Round pick Jack Jones, but it sounds like he may have ended up in the perfect environment as he starts his professional career.

Jones started his career at USC but academic issues saw him dismissed from the team, which eventually led to an arrest after he broke into a restaurant after hours.  Jones narrowly avoided jailtime, thanks largely to his agent, James Tooson, who played a role in getting his life back on track.

From there, Jones buckled down and got his academics going in the right direction, which opened the door for a chance to get back on the field, this time, with head coach Herm Edwards at Arizona State.

It wasn’t easy, but Jones has since worked hard and now he has the opportunity he worked his entire life for.  Edwards spoke with Henry McKenna of USA TODAY and he believes that the structure and strictness of how things are done in Foxboro are a perfect fit for his former player.

“Sometimes talent can be a curse. I just think that he needs a place with structure and this place (the Patriots) will give him structure,” said Edwards. “Honestly, he’s going to a place where — when you think about the system and how they use their players — I think it’s a good fit for him. I think he needs that type of fit. He needs the strictness of what’s asked to do, of what’s required.

“He has enough talent. It won’t be because of talent. It will just be his ability to process the information and then do it in practice and apply it in a game — over and over and over. I think he understands that.”

He certainly appears to have great potential.  He’s extremely athletic, with a lot of the tools and instincts seem to make him a great addition to New England’s secondary.  Obviously, his work behind the scenes will likely play a big role in deciding how successful he can be but if his past is any indication, he definitely seems to be ready for it.

4) There was one notable scheduling quirk that happened to another team Thursday night and if anyone could use a little help, it’s definitely the Chicago Bears.

The Bears have the luxury of potentially having a major advantage during the latter part of the season, with the team playing the entire month of December at home.  That stretch includes a game against the Packers on 12/4, followed by a bye week, and then a match-up against both Philadelphia (12/18) and the Bills (12/24).

According to CBS Sports, the fact they don’t play a single road game during December is the first time that’s happened to Chicago since 1964.

Chicago could certainly use a break.  They went 6-11 in 2021, which was just three games ahead of the 3-13-1 Lions.  They still face a bit of an uphill battle in the NFC North, which has been largely dominated by Green Bay and Minnesota in recent years.  They’ll likely be hoping that second-year quarterback Justin Fields can take a step forward as he heads into his sophomore season.

5) While the Patriots’ schedule isn’t ideal, there are four teams who certainly have their own difficult stretches.

Miami, Philadelphia, Kansas City and Green Bay each have a stretch where they’re forced to play three straight road games, with part of that stretch working out in New England’s favor.

The Dolphins kick off their run with two straight games out on the west coast at San Francisco and Los Angeles Chargers, before finishing it off with a game that should likely be a tough one for them against the Bills.  From there, they come home to face the Packers in yet another tough one, before having to go back on the road to Foxboro.

As a result, the Patriots should see a pretty beaten-down club by the time that match-up happens.

However, that type of run isn’t necessarily as bad as it looks on paper.  CBS Sports points out that teams are 22-11 on three-game road stretches, which is certainly a little surprising.

Hopefully, we’ll see the Patriots add at least one loss to that total, with Miami set to visit Gillette Stadium on New Year’s Day at 1:00pm.