Should Moss start whining to refs?

Could This Chargers Quarterback Be Option For Patriots In 2021? 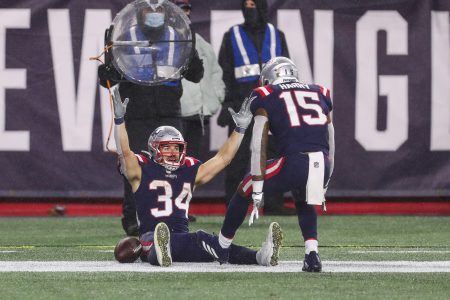 He was getting mauled, but kept his mouth shut - which I have to say is refreshing. I can't stand it when a receiver runs a fly pattern, doesn't sniff catching the ball, gets up and turns to the ref and starts yelling (*coughs Reggie Wayne...). The frustrating part is that the refs normally side with the complaining receiver - and we've been burnt by this dynamic many a time.

So, I appreciate the fact that Moss doesn't whine to the refs in-game. However, BB or somebody has to pull a Polian, dial up Pereira and let them know last nite's ref'n re: Moss was crap. If they are going to call him for a phantom OPI, then they have to call it when his jersey is getting ripped off on a slant.

If Marvin Harrison or Torry Holt whine to a ref, maybe they get more calls.

Moss or TO whining to refs can NEVER be considered a good idea.

I really liked BB's press conference today. I thought he made the only point that matters. He didn't put it like this, but here's how I put it.

The Patriots beat the Colts after a questionable call on offensive pass interference because they went back to the huddle and figured out how to convert on 1st and goal from the 13. They didn't waste 5 seconds of the play clock worrying about arguing. They didn't have a "woe is me," "look what could have been" attitude. They went back in the huddle and controlled what they can control.

Randy Moss whining about calls is a waste of time, and he seems to know it. The only time ever to whine about a call is where you have some legitimate belief that you can change how the ref calls it in the future. Randy Moss isn't going to have that happen for him. Not now; not in a million years. Belichick? Maybe. He doesn't whine about calls, so on the rare occasions he says something, the refs listen. And maybe there is a time or place to raise the issue about Moss getting called for offensive PI, but it's not right now.

Just go back to the huddle and win the game.

He is getting picked on because of Polian doing it. The Patriots have to bring this up very loudly. I liked Brady's comments about the water bottle. Thats the way.

Moss came to the Pats WAY after Polian's complaints.

Keep the paranoia in check, guys...

Moss should complain because Maroney, Meriweather and CJackson are all duds, busts, made of glass. Puhleaze.

You know, he's had two TDs taken away from him on offensive pass interference calls that didn't happen, and both times he just went back to the huddle. He's a better man than I am.

Perhaps refs that are poor enough to make calls they didn't actually see, would be the type to pile on more should he complain? Not sure. It's actually kinda cool that he's so cool, calm, and collected out there.
K

Moss, the athlete, is the balls!

Moss, the man, is even more intriguing.

I love it when he makes his play and then immediately hands the ball to the ref.

In the end zone, he does the "split-the-D" arm-spread thing for 2 seconds. Very kool, very discrete. Occasionally, he'll "interact" with a few of the fans (or the camera guy) briefly.

I have never seen him waste any time or expend any needless energy.

I don't think he'll ever complain about a call. I also think he's one tough SOB.

I think it's classier that he says nothing and just plays the game hard.

Unfortunately it seems to be the guys who whine the most that get the refs to actually pay attention. *stares down Polian*

Idle thoughts - the "the best is yet to come" edition
2