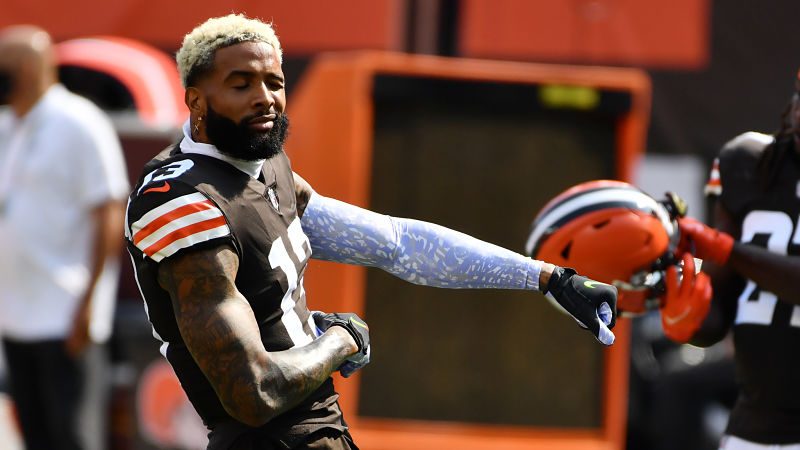 Should the Patriots trade for Odell Beckham Jr.? Nick Wright reveals an interesting text message he received about the Browns wide receiver.

On Tuesday, FS1’s Nick Wright brought the debate to another level by revealing an interesting text message he received in wake of Cleveland’s Week 6 defeat.

“I got a text message from what I will call a ‘trusted NFL source,’ ” Wright said on “First Things First.” “And the text message said, ‘The Odell trade rumblings are rumbling again.'”
Click to expand...

“I look around the league and I say, ‘Who is a team that if (Beckham) were to become available could fit him in under the cap, would make sense (and) has an obvious need there, and the top of that list is your Patriots,” Wright said.

“Now, the text said nothing about the Patriots. I want to be clear here. I want to be clear that A) The text was not from Odell. I promise I give my word. And B) The text did not say any team in particular. I’m connecting the Patriots dot when I was told that the Odell trade rumblings are starting to rumble again,” he added. ” … I do think they could use another weapon so it’s not Ryan Izzo going over the middle fumbling the game away. But I think the Patriots are gonna be fine, and I think they could be downright dangerous had they added Le’Veon Bell — they didn’t — or if they were to make a trade for a wide receiver, which maybe they could.”
Click to expand...

PatsFans.com Supporter
2020 Weekly NFL Picks Winner
They will trade him eventually because like the Rams, it becomes a problem forcing the ball to an ineffective player (Gurley) when you're paying him so much. In the Browns case, they're paying him a bunch of money to not do much.

BB needs to make this happen.

Nick Wright the clickbaiter? Way to eat that cheese.

I'm in agreement with @TheRainMaker

We need a WR. Our receiving core is an absolute trainwreck and Edelman is also getting old... Sign Odell. Sign anybody Belichick! Not trying to hate on Belichick. Our receiving unit is just that bad.

I have been on record many many times saying no to Odell, but I'm not so sure anymore at this time.
T

Harry and Myers won't get us a bag of footballs...

PatsFans.com Supporter
Who knows what the asking price would be. I do remember there being another, unrelated rumor about OBJ this season...

TommyBrady12 said:
Harry and Myers won't get us a bag of footballs...
Click to expand...

They can't even catch a football so you're probably right. A bag of footballs is worth more

KDPpatsfan said:
We don't have a 2...and he isn't worth a first. Not sure how.
Click to expand...

I think we have our 2nd rounder in 2021. The one moved for Sanu was this past drafts if that’s the one your thinking we don’t have.

PatsFans.com Supporter
Nick Wright is a Patriot hating media troll...and with that immense honker on his face an obvious oxygen thief.
S

Whatever it is, if Bill is publicly saying our offensive production is not good enough then I believe something is going to happen.

PatsBoy12 said:
I have been on record many many times saying no to Odell, but I'm not so sure anymore at this time.
Click to expand...

I’m still a no. There is lotsa talent, but very little consistency. Hot head, selfish, self-destructive. He can stay in Cleveland.

Nick Wright is pretty much the last person to believe when it comes to an inside scoop. But ODB would be a welcome addition.

Kdo5 said:
Nick Wright is pretty much the last person to believe when it comes to an inside scoop. But ODB would be a welcome addition.
Click to expand...

I just see AB + Gordon all over again. Not worth it.

farn said:
I just see AB + Gordon all over again. Not worth it.
Click to expand...

But he’s neither a psycho nor dealing with substance abuse...
J

TommyBrady12 said:
Harry and Myers won't get us a bag of footballs...
Click to expand...

No but if you trade em for OB, youll get a bag of shiit.
J

I dont like beckham, but unlikely this would happen anyway.
We need wr help. Any quality wr we get now is gonna come with baggage or will be an upcoming fa. Not sure who fits that description.
Really dont want beckham here screaming at Cam on the sidelines.

Jan 10, 2021
PatsFans.com Article
P
D
OT: The Case for Eliot Wolf to be Elevated to General Manager in Front Office
2 3