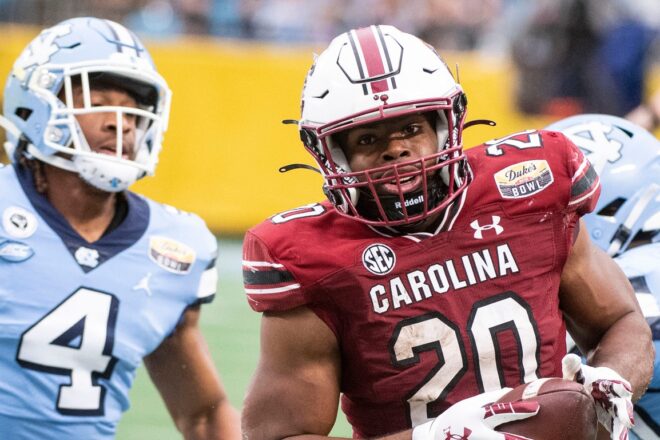 The New England Patriots snagged another running back in Round 6 of the NFL Draft on Saturday, with South Carolina’s Kevin Harris seeing his name called with the 183rd overall selection.

Harris’ addition comes following an earlier pick where New England used their 127th overall selection in the 4th Round on South Dakota’s State’s Pierre Strong, with the Patriots again adding a big, tough back to their backfield.

The South Carolina standout is certainly a little different from Strong.  Strong was leaner and faster, while Harris is a little shorter and bulkier (he’s 5’10”, 220lbs) and he definitely has more of a bruising style in terms of how he runs.

Looking at the film, Harris absolutely barrels into players as he gets into the second level, often dropping his shoulder and punishing opposing defenders, especially defensive backs.  At the same time, he’s similar to Strong, where he’s patient behind the line and then has terrific acceleration, and often breaks right through anyone trying to arm tackle him.

Despite his size, he’s also similar to Strong in that he’s deceptively fast and has good acceleration, although he doesn’t have quite the same breakaway speed.  But one of the biggest things that stands out is that he’s not someone who is easy to tackle, with a lot of players either going really low on him, or diving in up high to try and get their arms around his shoulder pads.  His center of gravity and balance is really good, making him extremely tough to bring down.

He’s also terrific out of the backfield.  He runs great routes and catches the ball away from his body and he’s really smooth in his movements.   He then does a great job of cutting upfield and getting yards after the catch, which was evident in several of the plays he made.

The biggest knock on him appears to be injuries, which is probably why he fell as far as he did.  Harris reportedly underwent back surgery last summer and was also hampered a bit by a mid-season ankle injury in 2021.  But he got stronger down the stretch and looks like he could be a player who could potentially compete for a role if he’s anywhere close to where he was in 2020 before he got hurt.

Several publications seem to agree that if he’s able to regain that form, he’d be considered a steal given that he was a sixth-round pick.  Hopefully, that will be the case now that he’s wearing a Patriots uniform.

By: Ian Logue
The New England Patriots finally announced this year's Hall of Fame member, with a popular player getting the call on Tuesday. Former defensive tackle, Vince…
6 hours ago