5 years ago at 9:21 am ET
Follow @IanLogue
Posted Under: Uncategorized

Here’s a quick rundown of this morning’s top stories on this Tuesday.

Patriots Pondering Trade of Mitchell? – Two years ago, the Patriots had seemingly found success with an early round receiver selection when they took Malcolm Mitchell in the fourth round of the 2016 NFL Draft.

Two years later, it suddenly looks a little less brilliant and Mitchell went from a promising offensive weapon to another name they’ll cross off the list of yet another disappointing player who didn’t work out.

After a rookie season that saw him catch 32 passes for 401 yards and four touchdowns, as well as finishing among the team leaders in third down and conversions, Mitchell’s been battling a knee injury that never saw him make it back last season and seemingly has his upcoming campaign in doubt as well.

According to the Boston Herald, Mitchell underwent a procedure on Monday to determine the extent of the discomfort he’s still reportedly experiencing, while Mark Daniels of the Providence Journal reports the third year receiver’s season could be in jeopardy.

The Herald also reported that the team has attempted to shop Mitchell in trade talks, seemingly signaling that they’re no longer willing to wait for him to eventually get back on the field.

It’s disappointing, with Mitchell’s potential final time as a Patriot coming in the critical moments down the stretch against Atlanta during the team’s historic Super Bowl win over the Falcons.  Mitchell caught six passes for 70-yards that day, including a huge 3rd-and-11 that helped set up a touchdown by Danny Amendola.  That pulled the Patriots to within 8 points at 28-20, and ended up being a memorable play for Mitchell.

With Mitchell’s situation in question, it seems that the Patriots may be leaning toward putting their faith in Kenny Britt.  Britt has been dealing with a hamstring injury that will reportedly see him start camp on PUP, but he’s expected to be back on the field shortly after training camp starts.

It’s an odd turn of events, with Mitchell looking focused and ready to go less than a month ago.

Unfortunately, signs right now seem to point to his career continuing elsewhere, if and when he can ever get healthy.

Garoppolo Wasn’t Intimidated by Brady – Quite a few guys who end up in New England tend to be a little star struck when it comes to Tom Brady, but it sounds like Jimmy Garoppolo was never intimidated by playing behind the best quarterback in the game.

In fact, confidence has never been a problem for Garoppolo, who heads into his first full season in San Francisco with a perfect record, having put together five straight wins to close out last season after being dealt by the Patriots to the 49ers.

Joon Lee put together a feature story on Bleacher Report on Garoppolo, asking Garoppolo if when he first arrived if he felt he would someday take Brady’s job.  Garoppolo wouldn’t bite – but he didn’t dispute that notion either.

“I’ve always had that mindset,” Jimmy says. “I knew that [Brady] was better than me in my first day in the NFL. Naturally, you’re the rookie and he’s the veteran, but you have to have that mindset, that you want to be the starter.”

“Even when I was a little kid, my brothers, whenever we would play, I would literally always think I was going to win. I wouldn’t, but I would always think that. It’s like when I go to New England, when I first got there, I thought in my head, ‘I’m better than this dude.’”

“But in your head, you believe you’re better than Tom Brady?” I ask.

“It was always a quiet confidence,” Jimmy says. “I would never speak that.”

I ask again: “But you believed that you were the best dude there?”

“Yeah, you believe in yourself,” Jimmy says. “That’s the best way to put it.”

Garoppolo also said that he and Brady had a very competitive relationship, with the two often competing in things like the bucket game, which would have the two throwing footballs into trash cans in the corner of the end zone.  Some days one would get the better of the other and Garoppolo admitted it would create friction between two guys who each hate to lose.

“There would be days where one of us would win and you wouldn’t talk to the other for a little while,” Jimmy told Bleacher Report. “We’d be fine the next day, but it was one of the best things for me. We would push each other and we got two Super Bowls out of it.” 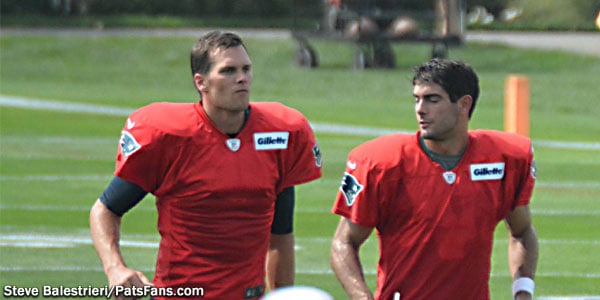 According to Garoppolo, he and Brady had a “healthy competitive” relationship. (USA TODAY Images)

The now 49ers quarterback compared the relationship to that of two brothers who were always trying to get the better of one another, calling it a healthy but competitive relationship.

“The competitiveness between the two of us was very similar. If I’m playing my best friend in one-on-one basketball, if we are both into it, by the end, we are going to hate each other,” Jimmy says. “That’s how it is.”

“All the good competitors have that. We got along, but there were always times where we wanted to kill each other. It was a healthy, competitive relationship.”

King: Patriots AFC East Success is Overrated – New England’s success in the AFC East is a topic of discussion that’s seemingly brought up every season, but Tom Curran cites an article from Peter King of NBC Sports on Monday, yet points out that their success extends far outside of their division.

According to Curran, the Patriots are 118-32 outside of the division, tallying an impressive .786 winning percentage.  That’s not far off from the .788 percentage they’ve put together after compiling a 71-19 run, with both records coming since 2003.

The reason that sparked this discussion was the fact King believes that because the NFL realigned the divisions after the 2002 season, it would have made for a more competitive situation had the Colts not moved to the AFC South.

King goes on to say that he believes things would have been more competitive had Indianapolis remained in the division but as Belichick has pointed out, like every other team, they can only play who is on their schedule.

And whoever that’s been, the Patriots have clearly handled all of them pretty well.