It’s Monday, and here’s a quick rundown of this morning’s top stories

NFL Shuts Down a Historic Practice – Leave it to the NFL to nitpick when it comes to unorthodox methods that they apparently forgot happened among the greatest past coaches and teams in league history.

Mike Reiss of ESPN reported in his Sunday notes column that the NFL decided to institute a rule that prevents teams from holding practices with players not wearing numbers on their jerseys.

The argument, or their apparent justifcation as it were, given by the league for this change is to “ensure clubs are in compliance with workplace rules”.  The change supposedly will make it easier for the league to make sure players who shouldn’t be participating, aren’t, while also allowing the NFLPA and the NFL the ability “to monitor player participation during on-field sessions.”

As Reiss points out, Steelers legendary coach, Chuck Noll, used the practice of numberless jerseys to force his players to get familiar with eachother, with players having never worn numbers on their jerseys except for on game day.  Belichick, who appreciates history and has employed quite a few practices of past successful coaches, had instituted that practice here in New England over the past few seasons.  But apparently the league decided that during mandatory practices, players now must be identifiable with numbers.

Belichick instituted this practice back in 2012, which had a couple of players talking about how the goal was to improve communication.

“They want us to learn each other’s names and communicate better,” one player told Reiss at the time.

Those days are done, at least during mandatory sessions.

It’s amazing that the league continues to do things to essentially needle a team that every season is one of the most successful franchises in sports, and there’s no other way to really look at the decision given the insignificance surrounding the reasoning behind it.  This wasn’t something developed by Belichick, but he saw the value by one of the greats that it helped from a team-building standpoint.

All you can do is wonder how something so essentially meaningless in Roger Goodell’s world of “integrity of the game” required discussion at the league office for them to take this step.  Not that it’s really a surprise after last offseason saw them ban a perfectly legal practice after the Patriots legally exploited the eligible receiver rule against the Ravens in the Divisional round that left them whining to the media after the loss.  This team wins because they’re smarter and always thinking of ways to innovate and get an edge.

It’s yet another bizarre move without a reasonable explanation.  Between this latest move and the ongoing saga with Tom Brady, it’s obvious that the Patriots are still on the minds of the geniuses in New York. 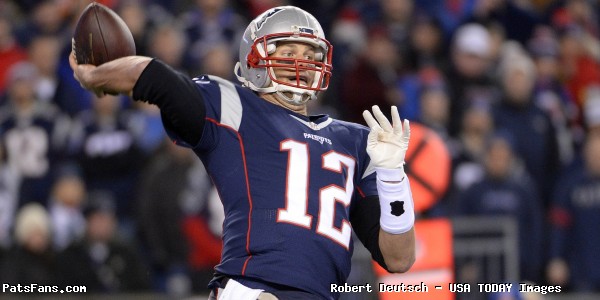 Brady’s been a professional despite all the accusations the league continues to make.

Light Stands Behind Brady – Speaking of that ongoing mess, former teammate Matt Light continues to be impressed with how Brady has handled himself as the league’s ongoing blitz against him continues.

Light told the Boston Herald that Brady’s continued to handle himself perfectly, despite how bad of a light the NFL has tried to put him in.

“It’s what he does,” said Light. “I’ll say this. (Brady) has done nothing but be as professional as it could possibly get, and that’s in the face of such opposition. He’s been targeted in such a way, I mean, I don’t think I’ve seen that in any industry.”

“I don’t know if I’ve ever seen anyone get painted in a worse way or picture than him. But he’s been 100 percent professional, and then you contrast that with the league and the decisions Roger continues to make.”

Kudos to Brady, who has been quiet during this progress despite the fact the commissioner has publicly continued to insinuate wrong doing by using the term “scheme” and saying things like “the rules apply to everyone.”

Although everyone is aware of the double-standard as it pertains to the league these days.  How about the psi results from the tests the NFL did last season?

Wait, those suddenly became “spot checks” so we won’t talk about that.  After all, it’s all about #Integrity.

Gronk, Pats on Same Page – Patriots tight end Rob Gronkowski’s absence last week raised some eyebrows, but it sounds like both he and the team are together on whatever the plan will be between now and the beginning of training camp.

Gronkowski told reporters during an event while working with children at a youth football camp over the weekend that he’s fine and that he took part in the drills that were open to the media last week.

“I’m doing other things, participating fully with what the coaches have me doing,” Gronkowski said via CSNNE.com. “So we’re all good. We’re all on the same page.”

Gronk also expects to be ready for training camp, which at the end of the day is more important anyway.

Brown, who is now an analyst for CSNNE, spent time on Tuesday and Wednesday helping out both the receivers, and also giving some coaching advice to players during punt return drills.

“It was good,” Patriots receiver Keshawn Martin said via CSNNE.com. “When he was here, he was one of those guys that really worked hard and made plays when plays [came] his way. It’s good to have a guy like that out there. Just to have his voice, it’s good for us.”

“He’s done it all, so I feel like he can help us with everything, whether it’s returns or receiver stuff. It’s a benefit for us.”

Brown is a member of the Patriots Hall of Fame, finishing his career with 557 receptions for 6,366 yards and 31 touchdowns.

“For me, it’s just transitioning,” said Mitchell. “Troy has a great understanding of everything, truthfully. Just being a guy you can go [to], ask extra questions . . . It’s great.”

Develin Glad to be Back – Patriots fullback James Develin spent last season on injured reserve after suffering a broken leg during the preseason, sabotaging what was a contract year for the veteran.

After enduring the process before his eventual re-signing with the team, the recent practices allowed him to put it all behind him and get back to work, and he’s glad to be back.

“I’m very, very happy to be a Patriot,” Develin told the Attleboro Sun Times last week. “That was a process that I didn’t enjoy, the whole free-agency process, but I’m glad to be back out here and glad to be out here with the team.”

Being on the sideline last year gave him a different perspective, and Develin admitted it was tough being out but it’s now a motivating factor for him to come back this season and hopefully work his way back into the offense.  That will be good news for a Patriots offense that stalled down the stretch in the ground game last season, and having Develin back should hopefully help make them better in 2016.

“I try to look at myself as a team guy, so it was hard not being out there with my brothers and my teammates,” he said. “Like I said before, I knew I had a job to do and that was to rehab and get better. I kind of set my focus on that and helped the team as much as I could from an outsider’s perspective.

“It was a learning experience for me, definitely,” he added. “It was kind of being on the outside looking in, but it was a good year and a good year to grow from.”