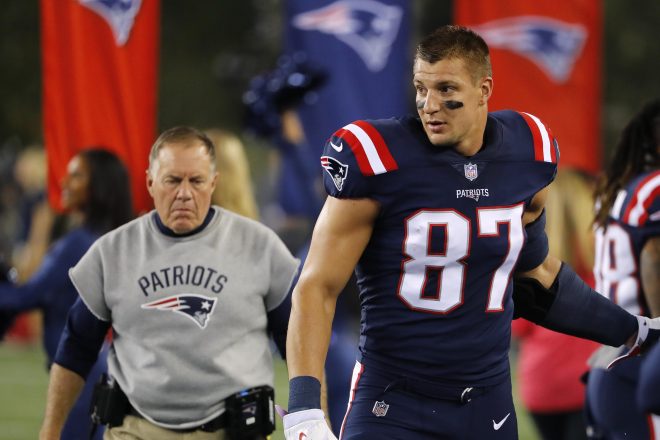 Gronkowski Announcement Doesn’t Change Much:
Patriots tight end Rob Gronkowski and his agent Drew Rosenhaus met with Bill Belichick on Tuesday telling the coach that he’s returning for the 2018 season. Adam Schefter reported this first on ESPN. This ends months of speculation that he may retire.

“It was very positive and Rob is committed,” Rosenhaus told Schefter.

Gronkowski then took to Instagram to announce his intentions: 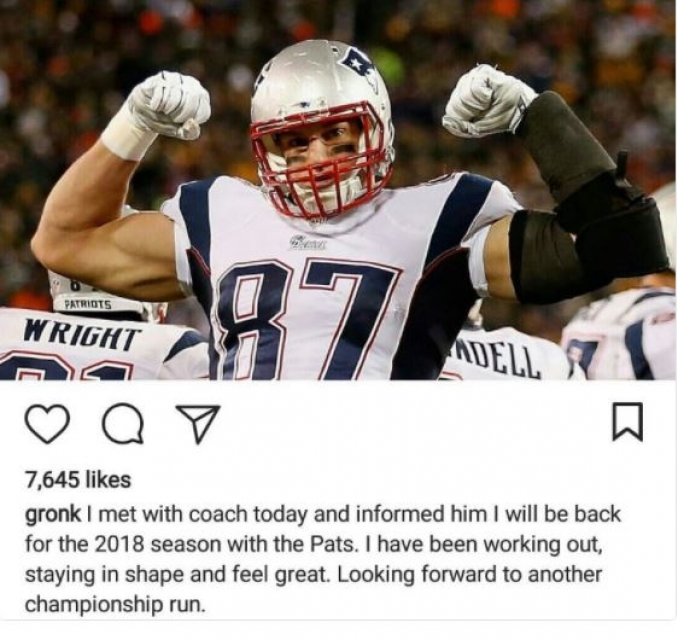 Jeff Howe reported that just a few days ago, Gronkowski didn’t have a date to return and now he’s all in. Howe believes that Belichick issued him an ultimatum. 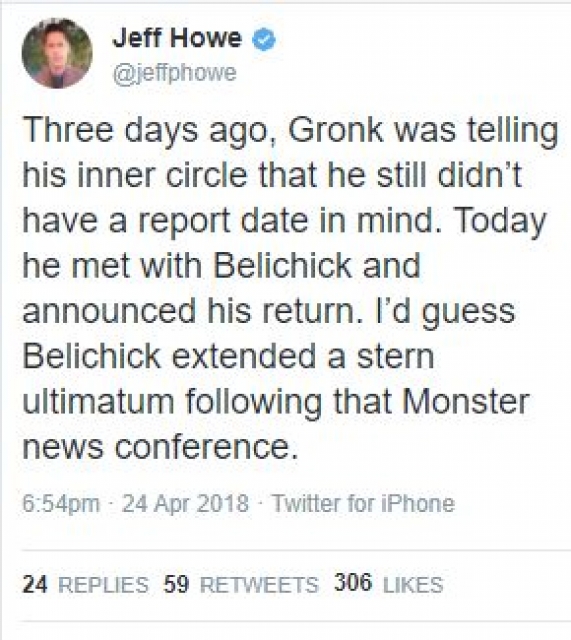 Regardless, it doesn’t change much for the Patriots needs wise in the draft this weekend. While they have Gronkowski, Dwayne Allen, Troy Niklas, Jacob Hollister and Will Tye on the roster, they still have a need there as Gronkowski has committed to playing in 2018. The next question becomes, what happens in 2019? While the need may be significantly lower this year, they still may opt to address the position.

The interesting tidbit was that Schefter announced through a source that Gronkowski will not be traded in 2018. Just as an FYI, that is what was said about Jimmy Garoppolo.

Van Noy Tells Patriots Nation to Chill Out:
When the news of the Gronkowski “decision” was aired, Patriots linebacker Kyle Van Noy had some fun with it and laughingly told everyone to calm down and was hoping for the media to leave it alone as well.

Something tells us that more than one player will pipe in now in regards to this latest Gronkowski saga.

Patriots 4th and 2 Podcast Dates Upcoming:
Be sure to check out our Patriots 4th & 2 podcasts right after each day of the 2018 Draft and the guys will break down who the Patriots added through each round.

Final Mock Draft Has the Patriots Moving Up

The Patriots have several options in the upcoming draft on Thursday night. And while we all talk about “positions of need”, the fact of the matter is, with the roster as currently constructed (if healthy), they’d be okay. Obviously, there are questions of depth at LT (Waddle, Garcia) and at LB, but with Hightower, Langi and Rivers returning, that should help quite a bit.

For our final mock draft, we explored the buzz that has been making the rounds, that the Patriots may decide to move up in the draft. And much of the talk has centered around the #9 pick of the San Francisco 49ers. We’ve heard a ton of talk that John Lynch “owes Bill Belichick” for the Garoppolo trade and frankly that is not how it works. Lynch owes the Patriots nothing, both sides went into that deal with their eyes wide open. If Belichick dials the phone on Thursday night, Lynch will certainly listen but doesn’t owe him a thing.

The thought moving up to #9 centers around the QBs obviously but in researching it, the top QBs (Rosen, Allen, Mayfield, Darnold) were all gone. We looked into it with the hope that LB Roquan Smith or DE Bradley Chubb may still be on the board due to the QB feeding frenzy going on. That didn’t happen. However, there are still opportunities.

So, for our final mock draft ( conducted 4-22), we still decided to explore a trade up. PatsFans Mock 4.0. We looked at pick #13 for the Washington Redskins. So in our mock, we made a deal with Washington. The Patriots slide up 10 spots and give the Redskins the #23 and #43 picks for Washington’s #13 and #109 in the 4th round, where the Patriots don’t have any picks. The value works out, Washington gets added value in the early second round and the Patriots get their move up as well as a pick in the 4th round. So who did they take?

Once the team decides (if Jackson is the guy) who their QB of the future is, then they have to go get him. The Patriots brought him in for an official visit on the sly and judging from their supposed interest, he could be a guy they are interested in. We’ll see.

Jackson is a tremendous athlete with incredible moves in the open field when forced to run and rushed for 3000 yards over the past two seasons. He has a cannon for an arm and threw for 57 touchdowns the past two seasons as well. He is still raw in the passing department but will have the time to work on his mechanics and learning the offense.

Belichick had his eyes opened last season by a rookie QB (Deshaun Watson) who is a mobile QB much like Jackson. Working with Josh McDaniels, Belichick and learning at the side of Tom Brady for the next couple of seasons should have him ready to go.

Jefferson is another one of those great athletes at the linebacker position and has the added advantage of being able to play on the inside or slide outside as an edge defender or blitzer off the corner. He’s good in coverage in both man or zone.

Jefferson is a great anticipatory player but is explosive, very athletic and a powerful tackler. He’ll learn to be a true off the ball linebacker and can be very effective.

Round 2 Pick # 63 Edge, Sam Hubbard, Ohio State:
We have said all along that Hubbard is a proto-typical Patriots type of edge defender.

Jones was a two-year starter for the Buckeyes who have developed quite a pipeline for tackles in the NFL. Jones has good size at 6’5, 310 and is a very good pass blocker, and has shown the quick feet and agility to rarely get beat by speed rushers on the edge. He’ll need to get stronger and become more physical, especially in the running game at the next level but under the tutelage of Dante Scarnecchia, he’ll get there. With the Garcia news that he’s healthy and ready to go, Jones won’t be hard-pressed to produce as a rookie.

Allen has great size (6’2, 215), and athleticism for the position. He was a starter since midway thru his freshman season and was one of the leaders of the defense. He’s one of the most physical safeties in the class and a big-time hitter

He can play deep but is best suited to be the player in waiting to replace Pat Chung in the box. Excellent in run support, can cover tight ends and will be a perfect player to play the LB slot in the Patriots “big nickel” package.

Armstrong had a tremendous 2016, with 20 tackles for a loss and 10 sacks as his coaches had him pinning his ears back. In 2017, going to a more read-and-react style, those numbers dropped to 9.5 TFL and just two sacks. But he has very good speed and a quick first step. Armstrong has dropped into coverage at times, something the Patriots ask their edge players to do occasionally. He’s a good, athletic player who tackles well but needs to add some bulk at the next level.

Springs has decent size at 6’0 and 205 pounds but was insanely productive for the Ducks with 42 passes defensed, including 17 in 2017 alone. He tracks the ball in the air as well as anyone. However, his top end speed isn’t great and looked a bit stiff when turning at times. He is very bowlegged which hurts his athleticism.

Samuels is a true jack of all trades, we wrote he is chameleon-like as he can do just about anything. He rushed for 404 yards and 12 touchdowns while being the leading receiver for the Wolfpack with 76 receptions for 597 yards and four scores. He’s a good route runner that played tight end in college, can run between the tackles and can do just about anything on the field. He’s a Bill Belichick type of guy.

Samuels draft profile that we wrote can be referenced here: