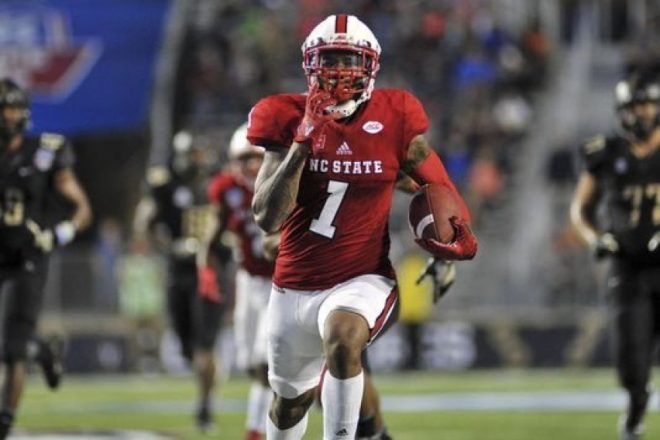 Hard to Pigeon Hole Samuels Into One Position

The Patriots and specifically Bill Belichick likes versatile football players. Guys who can do more than one thing are valuable role players and will find their way onto the roster. Some guys who were multifaceted had the good fortune to be called a “Swiss Army knife” as they had some valuable and varied skills

Jaylen Samuels from North Carolina State is a prime example of that. Samuels played tight end for the most part for the Wolfpack but in reality was much more. He is a true jack-of-all-trades as he lined up as a running back, H-Back, Fullback, wide receiver, slot receiver, and took some direct snaps.

He’s not a Swiss Army Knife but more of a chameleon. His skill set is such that some NFL coaches will have a hard time actually deciding what position it is that he will be used at. He played every position on the offense for the Wolfpack except the offensive line. He was NC State’s leading receiver with 76 receptions for 597 yards with 4 touchdowns. He also rushed for 404 yards for another 12 touchdowns.

He is a good route runner with good short area quickness where he can separate from man coverage. He possesses sure hands and will extend with a nice catch radius on throws wide of the mark and haul them in. Samuels was good in short-yardage, showing a nice ability to see the cracks in the defense and find the sticks or the goalline.

Samuels is competitive to the nth degree and will sometimes go over the top and lose his cool, but is a tough competitor and will go all out for his coaches.

With the right coach and the right system, Samuels can line up anywhere and be a factor on offense. As a running back out in the flat, as an H-Back, or in the slot. He will probably become a core special teamer immediately.

That is the $64,000 question. He’s probably just best used as a varied weapon where ever the team senses a mismatch.

It is possible that after a year in the system with the coaches and players that they will find a niche for him, but he may stay a jack of all trades in the offense where the defense can never know what is coming.

Take your pick, this guy fills so many shoes he could become a valuable player that he could make a bunch of special teams’ players expendable.

Conclusion:
NFL.com’s Lance Zierlein in his profile wrote that “Some may see Samuels as a valuable hybrid talent, while others may see a player who offers roster flexibility but lacks a position where he can win consistently. Samuels isn’t a tight end and has to prove he can handle blocking duties well enough to be a fullback. He will, however, appeal to teams looking to disguise their attacks with more diversified personnel groupings. Samuels best fit may be with a zone-scheme team as an RB/FB with the ability to play slot receiver and become a core special teamer.”

Samuels is a guy that you can’t help but root for. His varied skill set will have to be paired with a team that must be creative with his use. He averaged 6.1 yards per carry at NC State. The fact that he can do just about anything on offense could be seen by some as a detriment as some teams won’t be happy unless they can plug him into a specific hole.

What position is Samuels? I think I know how Bill Belichick will answer that. He’s a football player, he’d say and we’ll see how he’ll work out. But with the Patriots, I can see him as a third down running back that they can put in motion out to the slot. An H-Back or even as a flex or “move” tight end. In other words everywhere… and why not?

The kid can play a multitude of roles. After losing playmakers Danny Amendola, and Dion Lewis this spring in free agency, Samuels can help in replacing both in the running as well as the passing game.

Does he fit a specific area of need? Not particularly. But his overall value will outweigh his specific value in any one area. Some team will draft themselves a football player on Day 3 and if they are creative, he will give them mismatches all over the field. Samuels will be a fit in New England because Belichick and McDaniels could definitely find a variety of roles for him to excel in.

Right now the team does not have a fourth or a fifth-round draft pick. I’m sure that will change once the draft begins. That will change. And if they would select him, Samuels would give them a reason every day to keep him around. The man with no true position will end up with several.

Leonard’s highlight reel tape from the ACC Digital Network can be seen here:

His official highlight tape also by the ACC Digital Network can be seen here: