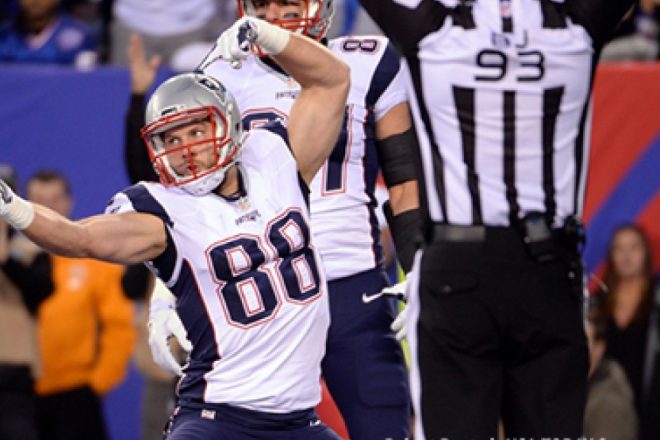 The weekend is over and it’s time to get back to work as we kickoff this Monday edition of the daily rundown. So let’s get to it.

Getting on the same page key to Patriots success on offense in 2016 – Newly acquired tight end Martellus Bennett’s addition seemingly changed the expectations of the Patriots offense in 2016, injecting plenty of optimism and excitement for what this group could potentially do given who he’ll be lining up with.

On paper, Bennett should be a game-changer, especially when you take into the account of adding a player with his size and athleticism and pairing him with a guy who is the best at his position in Rob Gronkowski.  However, Bennett will quietly have to do what some players have had a tough time with in recent years, and that’s adapt to an offense that often comes to the line with one play in mind and then seconds later, all 11 guys completely adapt to the defense and run a different play.

It’s really one of the biggest reasons this team has been so successful over the years, and it’s one of the reasons there’s always a level of skepticism among fans that comes with any new additions to the offense.

Incumbent Danny Amendola understands that, and when he looks out into the defense he admitted that he already has a general idea after three seasons of how Tom Brady is going to react.

“A lot of times, when you’re lined up, and you kind of see what (the opposing defense) is doing, you can already have an idea what Tom’s seeing, and he’s going to get to,” Amendola said via the Boston Herald. “Sometimes, you’ll know the coverage they’re giving, and I’m like, there’s a play I would love to get to, and I see him check it, and it’s just like, it all makes sense.”

Amendola should know as well as anyone, and it was pretty obvious that when things were clicking and the majority of their players were healthy, he understood where he needed to be.  Prior to the Giants game, where Julian Edelman suffered his injury in Week 10, Amendola was targeted 37 times with 30 receptions, including 20 first downs and 2 touchdowns while averaging almost 11-yards per reception.

There was obviously a drop off after Edelman went down and as other players began to get banged up in their offense, Amendola remained a consistent performer.  From the Giants game through the end of the season he caught 35 passes on 50 targets, with Brady failing to connect with him just 15 times over that span.

While he hasn’t been as dominant as some expected when he came here following the departure of Wes Welker, he’s filled his role nicely behind Edelman and Gronkowski and was a key component to their championship run in 2014.

Now as they head into 2016 hoping for a player like Bennett as well as receiver Chris Hogan to take them over the top, it all comes down to how well they’ll be able to react when faced with the hundreds of defensive formations they’ll have to adapt to when they begin playing the NFL’s version of chess this season.

That work may be quietly underway after Tom Brady recently signaled on social media for his receivers to “assemble”, which lead to humorous responses by both Edelman and Amendola, along with Gronkowski and Bennett.  But that likely means there are plans in place to get some workouts scheduled between them before the group begins reporting for real.

Fortunately it’s early enough in the offseason for everyone to get back on the same page and if this group plays to its potential, this should be an unbelievably potent offense in 2016.

“There aren’t too many places where you have all 11 guys change in like three seconds,” former NFL QB Trent Dilfer told the Boston Herald recently. “That just doesn’t happen very often. When it does, it’s usually in New England, Denver or Green Bay.”

And with a quarterback as championship-driven as Brady, he’ll likely be working hard to make sure they’re at a level above both of those teams by the time this season kicks off.

Chung Rewarded With New Guarantees w/Extension – Patriots safety Patrick Chung has enjoyed a resurgence in his career since returning to New England, and it looks like Bill Belichick has been pleased enough by what he’s seen to ensure that Chung sticks around for the foreseeable future.

Chung received a contract extension on Friday that will keep him in New England through 2018, and it had the Patriots turning much of his contract into guarantees in a good-faith type of move that should hopefully make the veteran safety feel pretty good about coming back to the team that drafted him.

According to ESPN’s Mike Reiss, the Patriots turned approximately $1.8 million of what Chung was likely to earn with incentives and turned it into an up-front signing bonus in exchange for Chung adding on one more year to his deal.  It was a smart move on New England’s part, as it likely makes Chung happy and it gives them some additional consistency in the secondary as they continue trying to build around a pretty good young nucleus of players who each have a Championship under their belts and are likely hungry to get that feeling one more time.

Patriots’ Interest Raises Stock in Players – The Patriots tend to be pretty thorough yet selective when it comes to which players they bring in for visits, and it sounds like those around the league who understand how New England operates, while many of them may not like it, they at least seem to respect the level and quality of scouting that may have gone into that particular player.

Reiss also pointed out in his Sunday notes that he spoke to an agent whose free-agent client recently had a workout with the Patriots, and four teams called the same day to express some level of interest.  That tells you how much they clearly think of New England’s scouting department, which is understandably respected given the Patriots consistent run of success.  It’s hard not to argue that while Brady and Belichick get much of the credit for the team’s success, it’s the incredibly deep and talented roster, with 2015 as an obvious reference point given their injuries, that ultimately plays the biggest part in most of those victories. 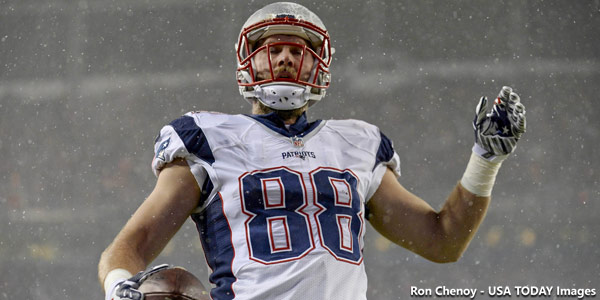 Chandler took some abuse in the Denver game and then another tackle a week later seemed to leave him hampered.

Light Finally Shed on Chandler’s Struggles – Looking back at the 2015 season for now-former tight end Scott Chandler, there were likely many who were disappointed that the athletic and effective player they saw playing in Buffalo didn’t quite translate into the same player in New England.

However, with a team as secretive as the Patriots when it comes to injuries, it’s hard to get a completely clear picture of what’s really wrong with a player.  Some sad news revealed on Saturday by Chandler’s wife via Twitter now likely provides a better explanation of exactly what happened to Chandler that caused him to drop off the way he did.

His wife, Alissa, posted pictures of her husband on Twitter as he continues dealing with an apparent knee injury, the same injury that likely lead to his “failed physical” designation that ended his time in New England.  But the veteran tight end also revealed that following another knee surgery last week, he’ll be out for all of 2016 and it may keep him from playing football at all, potentially ending his NFL career.

While trying to pinpoint exactly where Chandler got hurt, the Denver game was certainly one where he took some abuse.   He took a big shot in the opening quarter after Broncos’ safety Darian Stewart delivered a brutal hit that took Chandler’s feet completely out from underneath him on their first play from scrimmage on their second offensive series.  He took another vicious shot low late in the game after Broncos cornerback Aqib Talib took his knees out and upended him, completely flipping him following a 10-yard reception by Chandler that was key in New England forcing overtime.  While Chandler jumped back up and kept going, he didn’t quite look like himself.

But against the Eagles one week later and Gronkowski sidelined, there was one play in the 3rd quarter that looks on film like it could have been the moment with 10:40 to go where Philadelphia cornerback Eric Rowe grabbed Chandler’s leg and dragged him down following a 6-yard reception, and Chandler got up a little gingerly but he stayed in the game and wound up catching a touchdown, which would be his final reception of the regular season as a member of the Patriots.

Prior to the Denver game, Brady had targeted Chandler 23 times with 14 receptions (61% completion percentage) along with two touchdowns.  Against the Broncos, Chandler saw a season-high 11 targets with five receptions, and the next week was targeted 7 times with 4 receptions, with 3 first downs and a touchdown in a disappointing loss against the Eagles.

Over the final four games, he was targeted just once without a reception and was inactive in Week 15 against Tennessee, but he gutted out the final two games and played in each of the Patriots postseason games.

Either way, it’s obvious something happened that had nothing to do with ability that slowed down his relatively productive start as a Patriot.  With a beautiful young family, if he’s truly played his last NFL snap, fortunately he’ll have plenty to keep him busy and even more love and support to hopefully fill that void.

“My two oldest sweeties are more than happy to keep me company with their snuggles and are willing to help me whenever and wherever they can,” wrote Chandler in the post displayed by his wife.

“Luckily, for me, I am surrounded by helpful, caring people who will be there when I’m in need.”

And we certainly wish him the best as he continues trying to recover.