6 years ago at 5:30 am ET
Follow @IanLogue
Posted Under: 2017 Patriots Training Camp 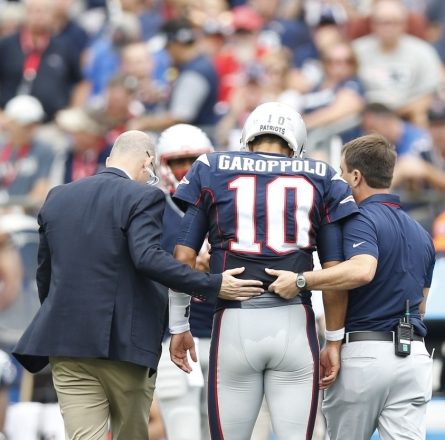 Unlike 2016, the Patriots hit the field on Thursday without the cloud of a four-game suspension hanging over their starting quarterback, which was obviously the big story when the team opened training camp last year.

Back then, Bill Belichick explained that the priority was to make sure back-up Jimmy Garoppolo got as much of the reps in practice as he could to ensure he’d be ready to go when the season kicked off in Arizona while Brady was out of the picture.

This season, things are certainly different but last season taught everyone something that more or less had gone overlooked with Brady at the helm during his career, and that’s the fact things can change in an instant.

Part of what Belichick preaches about everyone being ready to go at any given moment came to fruition last season when Garoppolo went down partway into the club’s home match-up against Miami, which forced third-string quarterback and rookie Jacoby Brissett into the line-up after Garoppolo was driven to the ground by linebacker Kiko Alonso.  The quarterback’s shoulder took the brunt of the hit, and just like that, the Patriots suddenly found themselves having to shuffle to try and salvage what was already a difficult situation with Brady sidelined.

To make matters worse, Brisset also suffered a thumb injury that ultimately hampered his throwing hand and likely played a part during the Patriots’ Week 4 loss against the Bills.  As a result, it was a reminder that there are no guarantees in this league and every player on the depth chart needs to be ready.

“I mean, last year, we were in a different situation, so that was what it was,” said Belichick on Thursday. “This year, we’re not in that situation. You know, we have three players at that position. We need to get all of them ready, and that’s what we’ll try to do.”

Belichick also noted that this training camp is shorter than some of his previous ones, with the team already set to hold joint workouts against Jacksonville in less than two weeks before their first preseason game.  That doesn’t give them much time and cuts into the reps for everyone on both sides of the ball, but it’s a challenge they’ll just need to deal with.

“Again, it’s a short training camp relative to, not last year, but relative to other years in my career,” said Belichick.  “We only have a handful of practices before we go up against Jacksonville and then Houston and then Detroit, and then we’re pretty much into the regular season. So, honestly, there’s probably not enough reps for the quarterbacks.”

“We could give them more, but we only have what we have, so we use the ones that we have the best that we can. I think it will be a challenge to get all three of them as ready as we’d like them to be or they’d like to be, but we’ll do the best we can. We’re working with the same opportunities as every other team in the league, so I’m not saying that. I’m just saying it is what it is. It’s a lot to get ready for.”

Despite those challenges, Belichick emphasized that it’s a problem not only at the quarterback position, but all the way down the line.  Everyone is just one play away from a big change, and that’s why they’ll do the best they can to make sure they’re ready should that problem arise this season.

“I mean, we have three guys to get ready and we’ll do the best we can to get all three of them ready. There’s a priority order to it, but I mean, Garoppolo is one play away from being in a different situation,” said Belichick.  “[Jacoby] Brissett’s one play away from being in a different situation. So, I mean, it’s like that on every position, but there’s ways to work more than one player at some positions other than place kicker, punter, quarterback. But other positions – you know, you’ve got two tackles out there. You can work more people at those spots. It’s harder to do at quarterback or those specialty positions.”

“So, we’ll do the best we can. They’re all important. Every guy is important. We need to get them all ready and we need to evaluate them all.”

By: Robert Alvarez
Julian Edelman shares photos from the 2018 AFC Championship game in a 'throwback Thursday" post on Instagram.
7 hours ago

By: Robert Alvarez
Julian Edelman appears on the Barstool Sports "Pardon My Take" podcast, reacts to Bill O'Brien's hiring, and more.
8 hours ago

By: Robert Alvarez
Bill O'Brien shares his first comments and reaction in his first interview since becoming the Patriots' new offensive coordinator.
8 hours ago