5 years ago at 9:26 am ET
Follow @SteveB7SFG
Posted Under: Patriots Commentary

Lots of Opportunities to Move Up

With the trade of Brandin Cooks to the Rams, the Patriots draft picks now look vastly different than they did a week ago. With two picks now in both the first and second rounds, they now have plenty of options to move up and around the draft board.

For this particular mock draft, we didn’t do any trading to move up or down the draft board, although we do feel that they will most certainly do so at some point as they now have no picks in the 4th or 5th rounds of the draft.

In their “On the Clock” simulator, you are the GM for any NFL team. You can choose how many rounds you’d like to draft for (1-7), and pick one of several big boards to choose from. The boards are all updated every Tuesday.

For this second mock draft (4-5), I used the big board of Draftek. 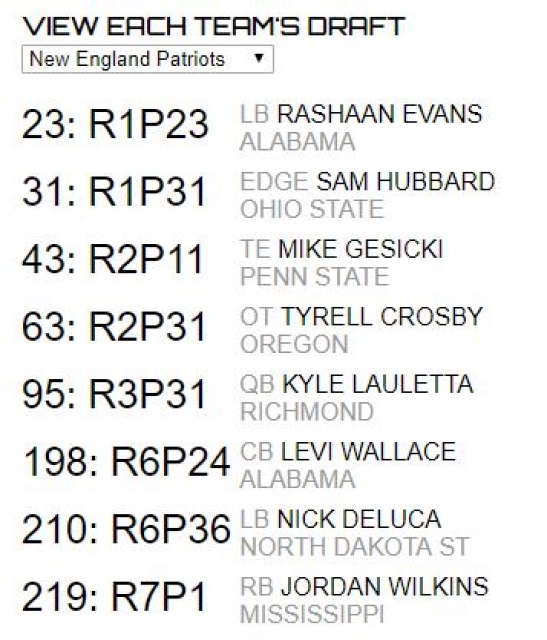 Evans somehow was still on the board at #23 and was too good a prospect to pass up. He’s a quick twitch, versatile linebacker who can line up in the middle at the Mike, or on the outside and has tremendous sideline-to-sideline speed. He can cover tight ends, running backs and is a tremendous blitzer up the A-gaps. He’s a big-time difference maker on defense and is a Day 1 starter. Read our draft profile on him here:

We stuck with our original pick at #31 with Hubbard as he was still there using a different big board. He’s not a one-trick pony that can scream off the edge and nothing else. But the Patriots with their style of defense want players who can set the edge first and also rush the passer. Hubbard is a well-rounded, good defensive end prospect.

Round 2, Pick #43 TE, Mike Gesicki, Penn State:
The Patriots pick up a long-term replacement for Rob Gronkowski who is/was contemplating retirement. While no one can replace the best tight end in the NFL, there are several very good options in the draft.

Gesicki has good size and moves pretty well for a guy at 6’5, 250-pounds. While he’s not an elite athlete that will leave defenders in the dust, he has the best hands of any TE in the draft and is a classic overachiever. He’s limited as a blocker and could use some more strength but would be a very good option in the flex or “move” tight end role with Gronk.

Round 2 Pick # 63 OT Tyrell Crosby, Oregon:
Crosby is an aggressive road grader in the running game, a mauler at 6’5, 320 pounds with excellent strength and power.

He has improved in pass protection and has played both tackle positions as a four-year starter for the Ducks.

Lauletta has been widely mock drafted to the Patriots all spring…which usually means that he won’t be coming. But by Round 3, the majority of the highly sought after quarterbacks were taken. Lauletta has the skill set to do very well with the Patriots.

He throws a nice ball and leads his receivers well, he won’t throw them into big hits. Lauletta has a quick release, very good footwork, moves well in the pocket and was a team leader. Doesn’t have a cannon for an arm but is very tough, physically, and mentally. Learning from Brady for a year or two may be just what the doctor ordered.

Lauletta’s draft profile by us can be seen here:

Wallace was a walk-on at Alabama because his father was from Tuscaloosa. High football I.Q. and considered to be a very high character player and person. Paid his dues and worked his way up to be a starter in 2017.

Was the “other guy” on the Bama defense that opponents tried to pick on. He responded with three interceptions and 18 passes defensed. Sets the edge extremely well in the running game. Lacks experience but a good developmental prospect. Good length at 6’0, 185 pounds.

Deluca is a three-year starter, a three-down middle linebacker who has smarts, leadership, and toughness. Deluca is a very instinctive linebacker while not a burner and doesn’t have great speed, he consistently plays faster because of his instincts. Has very good size at 6’2, 243 and covers well with good depth and can play both zone and man. Was an outstanding special teams’ player and will immediately become part of the core unit in the NFL.

Wilkins runs with a low pad level but at times tries to bounce too much to the outside. Had 26 catches as a senior, and would be a nice addition to the running back by committee approach. His best football is still in front of him.

By: Ian Logue
Some quick New England Patriots news and notes on this Wednesday.
16 mins ago