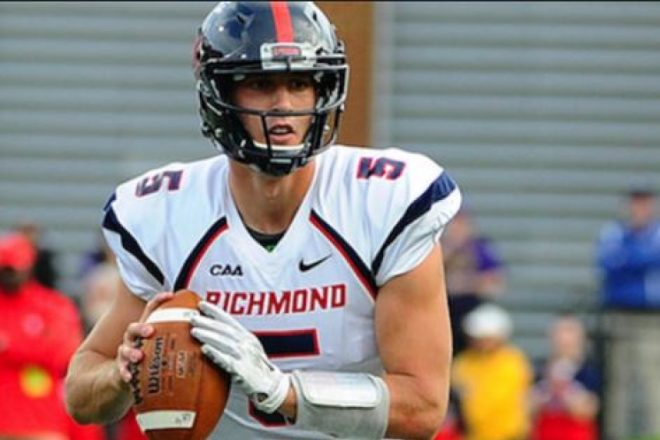 Lauletta Has Patriots Written All Over Him

The Patriots, after trading Jimmy Garoppolo at the deadline last season are back looking for an eventual successor to Tom Brady. While Brady showed no signs of slowing down last season, he’s going to be 41 this August and it is just a matter of time before he finally begins to show his age.

Brian Hoyer is just a journeyman, backup and while they can rely on him to hold the fort down for a week or two in an emergency, he doesn’t have the skill set or the longevity to be the solution. So, who is next successor to Brady? Do the Patriots even dip into the pool this year? While we feel it may be risking things a bit to put it off another year, the team may feel that they don’t like any of the QBs that will be available to them. Although I believe that they’ll at least dip for a developmental guy later in the draft.

There are no shortage of quarterbacks in this season’s draft that speak very highly of Brady. That shouldn’t be a shock, he’s been on top for 17 seasons and his longevity is tied to his work ethic, and the constant desire to improve. Whoever they do pick up will be expected to study under the master for the next year or two and be ready to take over then. There won’t be a big rush in Foxboro to push the next QB before he’s ready unless of an injury.

Kyle Lauletta from Richmond, is, in our opinion a pretty darned good fit for the Patriots. He has good size (6’3, 215-pounds) but it is his pedigree that makes him seem like a Patriot from jump street. Both his father and uncle played football at Navy. His uncle was coached by Steve Belichick on the Midshipman’s Special Teams’ squad as the team’s punter.

But beyond the Navy angle, he has the intangibles the Patriots, as well as other teams, look for. He’s considered a team leader both on and off the field and was elected captain. He comes from a QB line, his dad as we mentioned above was a QB at the academy.

Lauletta was a high school lacrosse player, who could have gotten a scholarship for that but his love for football won out. He didn’t receive any Division I offers. So he went to a lesser level of competition at Richmond and played with a chip on his shoulder. His production spiked in 2016 and 2017. Despite only having a so-so 6-5 team in 2017, he completed 64.9 percent of his throws for 3737 yards with 28 touchdowns and just 12 interceptions.

Lauletta has a quick release and timed with the ability to read and process the information quickly, makes him a very good QB to beat the blitz with quick accurate throws.He does, however, at times get happy feet in the pocket.

Despite being nearly an afterthought for the Senior Bowl, he had a great week of practice there and had a very strong game completing 8-12 passes for 198 yards and three touchdowns while taking home the MVP award.

– Throws to spots on the field

– Arm strength is an issue

– Will throw into double coverage at times

– Gets happy feet in the pocket on occasion

Lauletta will be under no pressure for immediate playtime and results.  He should be the third QB on the roster and focus on learning the offense, working on his mechanics and improving his arm strength.

Yes, in Year 2 he could be ready to challenge Hoyer for the backup job and become the true successor for #12.

No one, they’ll probably keep three QBs on the roster again and for this year, Brian Hoyer will be the backup for at least 2018.

Conclusion:
NFL.com’s Lance Zierlein in his profile didn’t give Lauletta high marks, he wrote, Lauletta has decent accuracy and mechanics to work with, but his lack of NFL arm strength will limit the number of teams who are willing to consider him. Lauletta’s interceptions come due to arm issues rather than decision-making and that may not be correctable in the pros due to the increase in play speed that he will see in NFL secondaries.

He has frequently been compared to Jimmy Garoppolo and the feeling here is that is based more on the fact that he’s been rumored to New England, and was a smaller school prospect. I don’t get the Garoppolo comparison at all.

His arm strength issues are a bit overblown (we heard the same things about Brady and Garoppolo) and could be a mechanical fix, If the Patriots decide to take a shot on him, then maybe some sessions with Tom House may be in order. But there is a lot to like about Lauletta. He gets rid of the ball quickly and accurately. He moves well in the pocket and has shown the ability to get away from the rush and scramble a bit.

He throws to spots on the field, which is a Brady trait. It shows that he and receivers work on their chemistry. He knows where a receiver is supposed to be and throws it there. So there is the trust factor which is big.

Another thing to like about Lauletta is how quickly he processes information. No one is as good as Brady at that, but Jimmy G. got much better at it while Jacoby Brissett did not. He throws on the move quite well and seems to have a knack for finding the open receiver once he’s on the move. And his accuracy was outstanding while rolling out. It looked like the coaches had quite a few called rollouts for him and after watching his accuracy, it is easy to see why.

It will be interesting to see what the Patriots do in Round 2. I don’t see them taking him in the 1st round. But although he’s slotted to go in Round 5, I believe that it is far too late after seeing what he did in the Senior Bowl.

Lauletta has a nice highlight reel tape from Priority Sports and can be seen here: