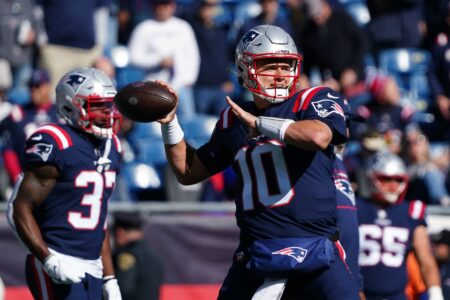 I know it's early but I believe that BB and the Patriots have WON the Free Agency period and it's not even close.

The Patriots had gaping holes and I have ROASTED BB in the past for his poor drafting that led us to this spot.

But I'll also give the man Credit when he earns it.

It's very CLEAR that BB concocted a master plan to address every major shortcoming in free agency.

And once the 'legal tampering' period began, BB pulled off his free agent ATTACK plan with the grace of a grand maestro conductor of an opera.

No fooling around, no waiting everyone out before making a move.

The Patriots struck HARD, they struck FIRST, and they showed NO MERCY to the rest of the league as they RAIDED the Free Agent market with unmatched AGGRESSION.

I know that not all the moves will work out, and winning free agency doesn't win you a title. Also I'm still SCARED as hell that BB will mess up the Draft again.

BUT for the topic of did the Patriots win Free Agency in 2021, I'm just going to have to give the man a HELL YEAH!!

Discuss your reactions and your personal scores for the Patriots Free Agency. Did they spend too much, too little, did they miss a player you wanted, did they get a player that you were touting all along?

2020 Weekly NFL Picks Winner
2021 Weekly NFL Picks Winner
I'll give him an A cause I love the Additions.
We spoke about needs many times in different threads and possible players as well. And then we sign two great TE and Judon within the first two days !! amazing
Also added much needed deep threat, DT/ NT, stout OT and cheap vet QB who knows the system.
I don't have much experience but the cap hits are looking very solid.
I mean we could still sign players as it seems after additions like that...

Face of the Franchise

PatsFans.com Supporter
2020 Weekly NFL Picks Winner
A from me. A team only signs this many players to the amount of money they do when they realize there's no talent on the team.

The thing I love about it is that practically none of the signings is a classic "splash signing" but if you think it through they makes sense.

BB gets a lot of toys to play with on defense, and McDaniels on offense. It will be a fun ride.
Last edited: Mar 16, 2021

PatsFans.com Supporter
I give it two boners up so far.

Easy A for me.

Patjew said:
I give it two boners up so far.
Click to expand...

I have questions, but the more I think about them the less I'm inclined to ask.
M

PatsFans.com Supporter
Every year we criticize other fan bases for exactly this exercise.

Face of the Franchise

mgteich said:
Every year we criticize other fan bases for exactly this exercise.
Click to expand...

Welcome to life as every other NFL team now.

Owner Of A Tactical Coffee Shop For Men

PatsFans.com Supporter
There is definite bust potential with many of these signings, but it seems like the contracts aren't so bad that we wouldn't be able to bail 1-2 years into any of them. They filled a majority of roster holes, which is something we really can't say in mid March most years. There's also boom potential. Who can really say one of those WR/TE we signed won't take it to the next level? They're all young and have generally improved over time so far. The sheer quantity of new contracts being signed gives us more shots at hitting on real players and safeguards against the bad deals that will inevitably happen. Double dipping at positions like WR, TE, DT gives the redundancy you want to have when taking risks like these.

There's still obviously some work to do at pass catching RB, C, ILB, and maybe CB if we botch the Jackson RFA situation (which I am not expecting), but that's what the draft is for. Plus, we appear to still have a non negligible amount of cap space. If we could somehow trick Houston into trading us a certain QB (again, which I am not expecting), it would still be very reasonable under our cap.

The worst case scenario is probably that we find ourselves in the same position next year as this year. Middling record, middling draft position, money to burn (having cut or traded a bunch of the people we signed yesterday). Maybe we get to just try this FA spending exercise again immediately.

The best case scenario is the team is immediately relevant again, with or without a good QB, on the strength of the defense and run game along with the proper training wheels for whatever QB we roll with.
Last edited: Mar 16, 2021

PatsFans.com Supporter
Not sure about the grades.

What I do know is BB and Krafty Bob busted out the plastic and signed some bad-ass talent with track records of production.

..and that's all you can really ask for.
R

PatsFans.com Supporter
2021 Weekly NFL Picks Winner
It’s certainly an A but before we get too full of ourselves it’s an A because we had A level holes in the roster and the corresponding cap space.

Find any top team, take away 7 guys of this caliber and then call them free agent signings and you see the dynamic. It wasn’t addition to a good solid squad like most of the last 20 years has been it was addition of the pieces that were missing (except the biggest one)

PatsFans.com Supporter
A!!! Not that I ever really did, much... but...

2019 Weekly Picks Winner
I want to give it an A- or a B+ just because some of the players are a slight overpay. I LOVE who we got and at the positions we got. This is the most excited by FA I have ever been and the team on paper looks MUCH improved with a clear plan of attack and additions to key weaknesses. All of that said when is the last time the winner of day 1 FA lives up to their new billing? At least half of those signings aren’t going to work out and two years from now there will be comments made about if we just hadnt signed player x, superbowls. 12.5 million for potential over production is concerning. 11 million APY for a WR who isn’t a gamechanger. 8 million APY for a DT I have never heard of seems a bit much but at the end of the day IBBWT and I am thrilled at the potential.

Dropped to a B- grade if we’re also counting Cam - he is a FA signing too so he should count. I’m also counting the loss of Thuney here. That’s a downgrade.

Overall enough to hope for the playoffs but still plenty of work to be done on the roster.
You must log in or register to reply here.

Oct 13, 2021
50-yard-line
5
P
NEW ARTICLE: VIDEO: Every One on One Interview With The Patriots Free Agency Signings