As were many players in the early days of the Boston Patriots, Art Graham was a local guy. He was born and raised in Somerville, went to Matignon High School in Cambridge, and then Boston College.

Two months after turning 22, in his third game as a pro Graham had six receptions for 156 yards and a pair of touchdowns against the Jets at Shea Stadium. In his rookie season Art Graham averaged a whopping 26.2 yards per catch, with five touchdowns as the Patriots defeated Buffalo to win the AFL East before losing to San Diego in the championship game. He followed that up with 45 receptions for 720 yards and six TDs the following year. Highlights included an eight-reception, 167 yard game against Houston at Fenway Park on November 6 when the Pats nipped the Oilers 25-24 to improve their record to 6-2-1. Graham ravaged the Oilers again three weeks later in Houston with a 104 yard performance that included an 80 yard TD reception from Parilli to open the second half for the Pats fourth win in a row.

Graham was not just a one dimensional player. Twice in that 10-3-1 '64 season he ran down opponents to make game saving tackles on long punt returns. The first was in week one against the Raiders on September 13 in a 17-14 win, and a week later he stopped Hall of Famer Lance Alworth after a 43 yard runback in a 33-28 victory over the defending champs.

Art also held the franchise record for the most receptions in a single game for 33 years. In a late season game between the league's two best teams he had eleven receptions for 134 yards and two touchdowns in the Patriots 27-27 tie at Kansas City on November 20, 1966. Graham also once caught a 22-yard touchdown pass - despite wearing only one shoe - in the Pats 20-14 win over Miami Dolphins a week later. As fate would have it, that would be the last time that the Pats would win in Miami until the Squish the Fish game, twenty years later. (Miami did lose a home game to the Patriots in 1969, but that was played in Tampa.)

Art Graham played in 75 games over six seasons for the Patriots, with 199 receptions for 3,107 yards and 20 touchdowns. Through the first twenty years of the franchise's existence, Graham ranked third in yards receiving and touchdown receptions. He is a member of the Pats All-Decade Team of the 1960s at wide receiver, alongside flanker Jim Colclough and end Jim Whalen. Graham is also in the Boston College Athletics Hall of Fame. 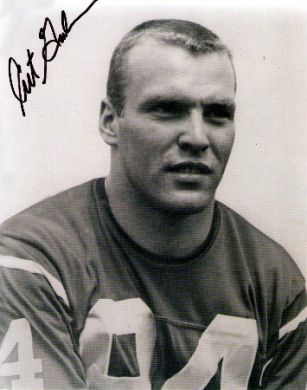 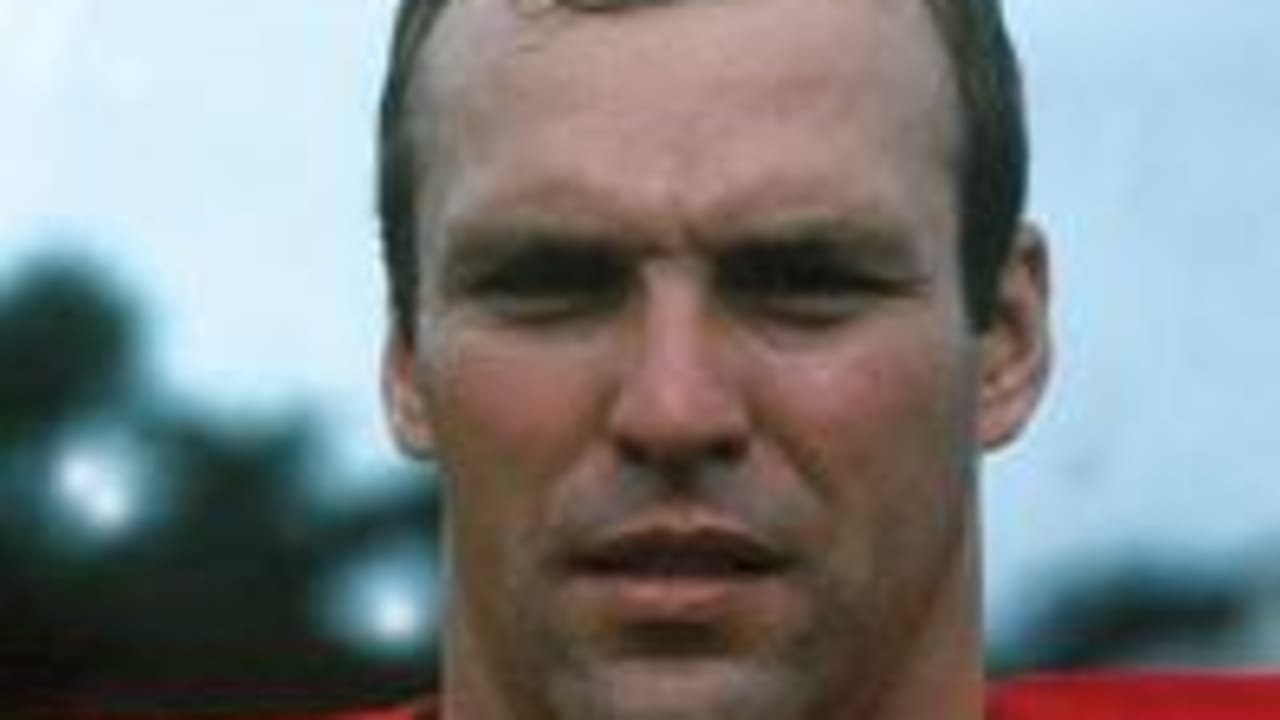 A member of BC's Athletics Hall of Fame, the former Patriots deep threat came from an athletic family. His father spent several seasons during the 1930s in the Red Sox farm system.

www.patriots.com
​
When Art Graham started his Boston Patriots career in 1963, it was customary for players of that era to hold a side job, which they worked in the offseason, to supplement their income. Graham, who was raised nearby in Somerville, Mass., was no exception. In the offseason, the Boston College product returned to his hometown to work his "part-time, full-time" job as a probation officer. He never relinquished the position, working 34 years in Somerville before retiring.​
​
"It was rewarding work," said Graham (1963-68), who is honored as one of two wide receivers on the Patriots 1960s All-Decade Team. "It's always nice to be able to contribute in the community that you grew up in."​
​
Graham's roots to the region run further still.​ 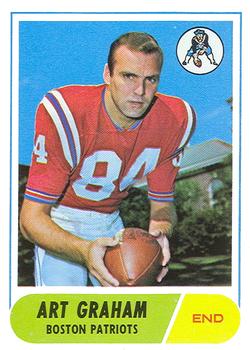 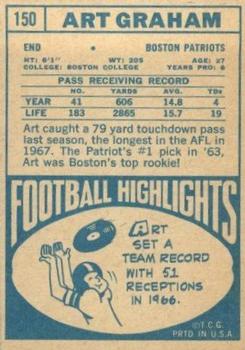 ​
A member of BC's Athletics Hall of Fame, the former Patriots deep threat came from an athletic family. His father spent several seasons during the 1930s in the Red Sox farm system. Although his father never saw time with the big club, Graham found it particularly rewarding when he was drafted by the Patriots with the seventh overall pick in the 1963 AFL Draft.​
​
"It was a great moment for my family," Graham said. "I think it's any athlete's dream to play for their hometown team."​
​
Graham fondly recalled his Draft Day memory.​
​
"We'd played Holy Cross that weekend and the AFL Draft was held on a Saturday afternoon, so we'd just finished playing when I found out that I was drafted. Then, the NFL Draft was on the following Tuesday. So we all had a joke that the guys that were drafted into the AFL all went missing over that weekend because they didn't want the NFL teams to be able to contact us."​
​
The Patriots acted swiftly and offered Graham a $10,000 signing bonus before the Cleveland Browns took him in the 11th round of the NFL Draft. Patriots owner Billy Sullivan tried to bring the sides to a speedy agreement by enlisting a BC professor of ethics, who told Graham that he had entered into a ‘moral contract' with his hometown team.​ Graham hesitated. He'd played in the East-West Shrine game that year with fellow end Tom Hutchinson of the University of Kentucky, who'd been taken by the Browns with their first-round pick.​
​
"I looked at him and said, ‘I'm better than he is.' But I think they looked down on a lot of schools in the East and I don't think BC had the reputation it has today.​
​
"But we knew we could play."​
​
Still, Graham couldn't pass up the opportunity to play in Boston and proceeded to prove his worth in his rookie season. He was named Patriots Rookie of the Year in 1963 after setting a team record with 26.2 yards per catch and five touchdowns, including a franchise-long 77-yard bomb from Babe Parilli.​
​
"I used to joke that it was amazing that I - an Irish kid - ever got the ball from a quarterback named Parilli with a receiver named [Gino] Cappelletti and a tight end named [Tony] Romeo," Graham laughed.​ 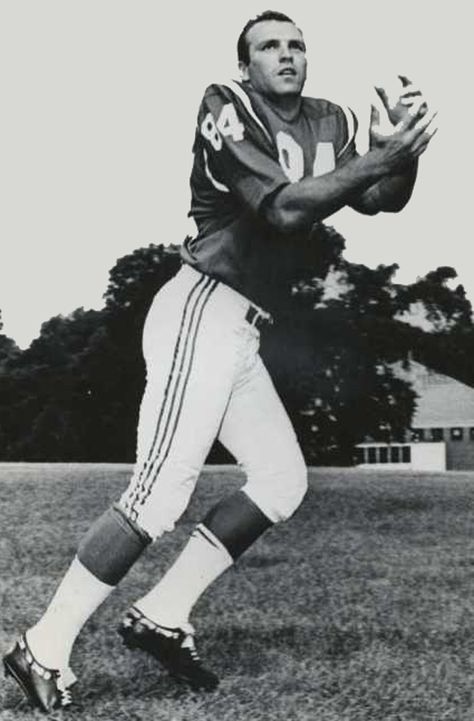 Graham and his ability to stretch the field - together with fellow BC alum Jim Colclough and Cappelletti - helped to form a potent aerial attack led by Parilli.​
​
"It was pretty unusual at that time to throw the ball as much as we did," Graham said. "It's pretty typical now that you see Tom Brady or Drew Brees throw the ball 30, 35 times. Sometimes you'd see Babe [Parilli] doing that back then. You just didn't see that much."​
​
A true New Englander, Graham has lived with his wife, Judy, on Cape Cod since his retirement. The couple has two daughters, Leigh and Lynne.​ 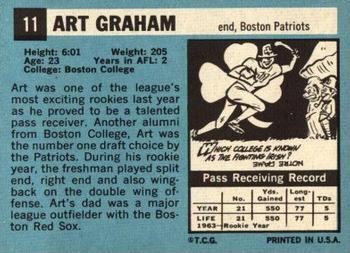 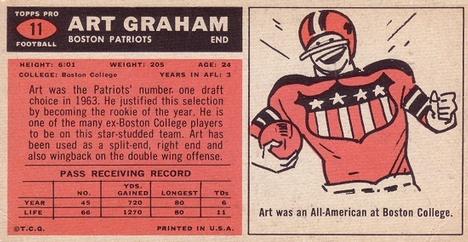 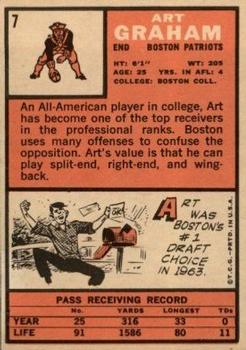 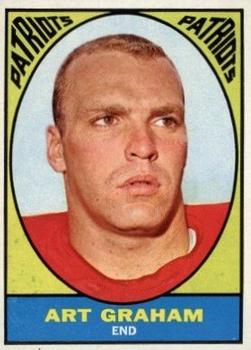 Antonio Langham played in 15 games with seven starts for the Pats, with one pick and four pass deflections in what would be his final NFL season. He was originally the ninth overall pick of the 1994 draft by the Browns out of Alabama, but he never did live up to that draft status. Langham played in the NFL from 1994 to 2000, spending four years with the Browns/Ravens, then one each with the 49ers, Browns again, and finally the Patriots. Four days after the conclusion of the 2001 draft the Pats released Langham, ending his seven year NFL career. 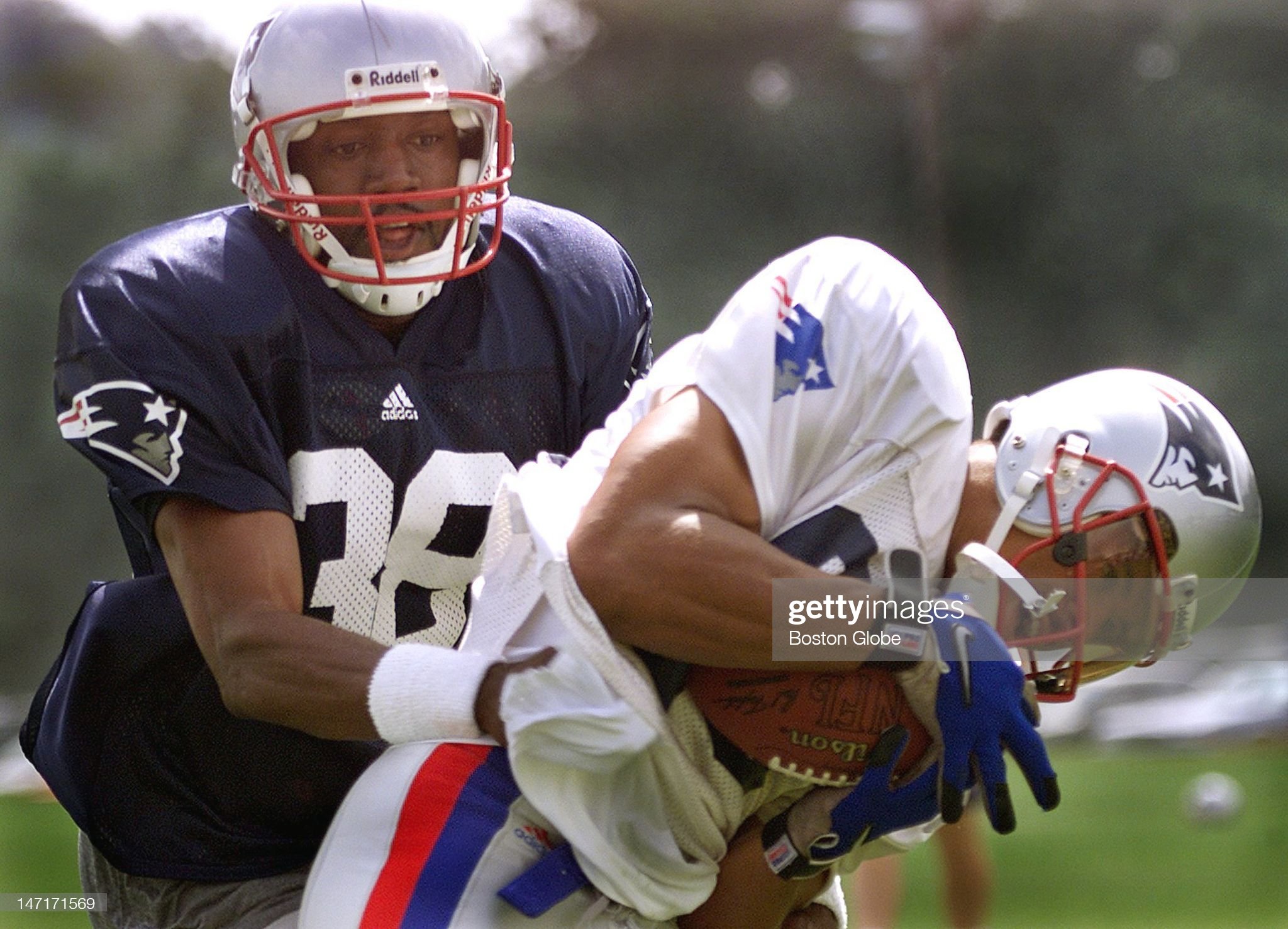 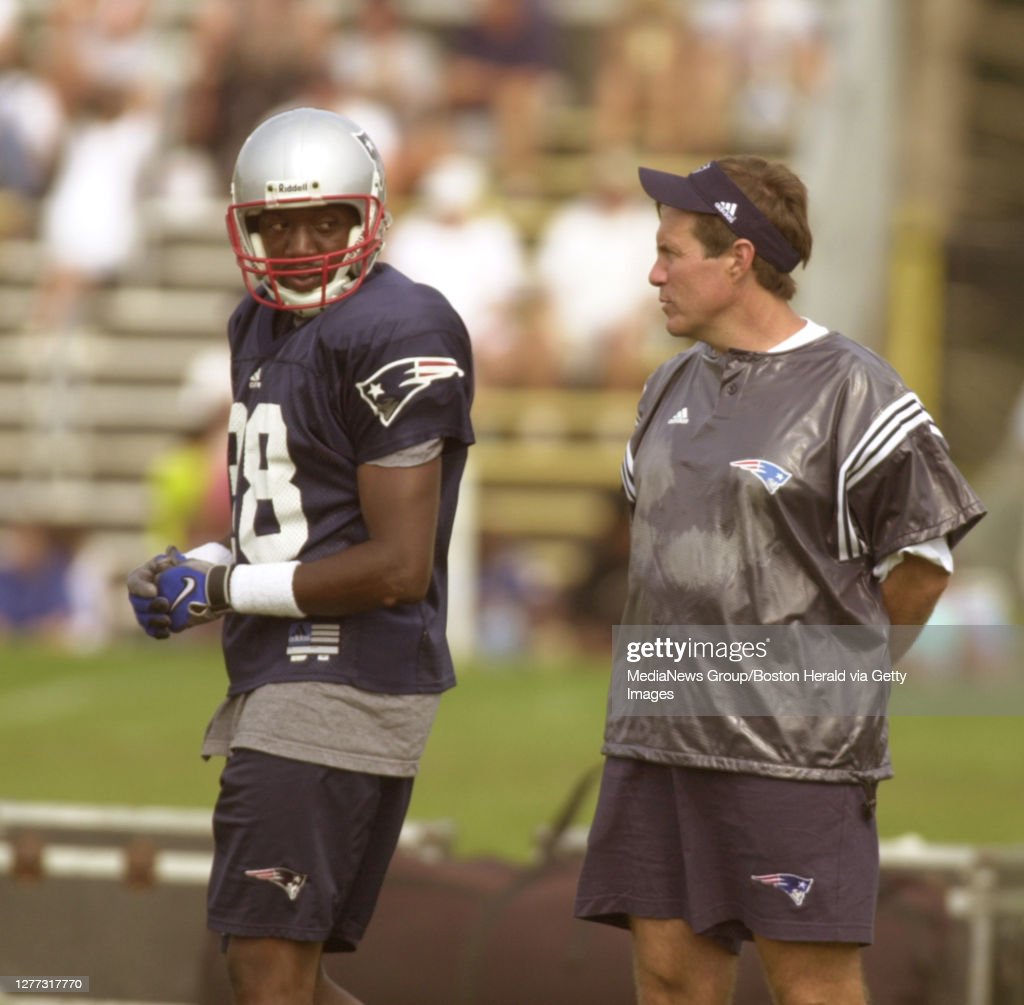 Aug 8, 2000: Langham and Bill Belichick reminisce about their time in Cleveland, during training camp at Bryant College. Sept 3, 2000: Langham gets flagged for a facemask after being beat by Tampa Bay WR Jacquiz Green 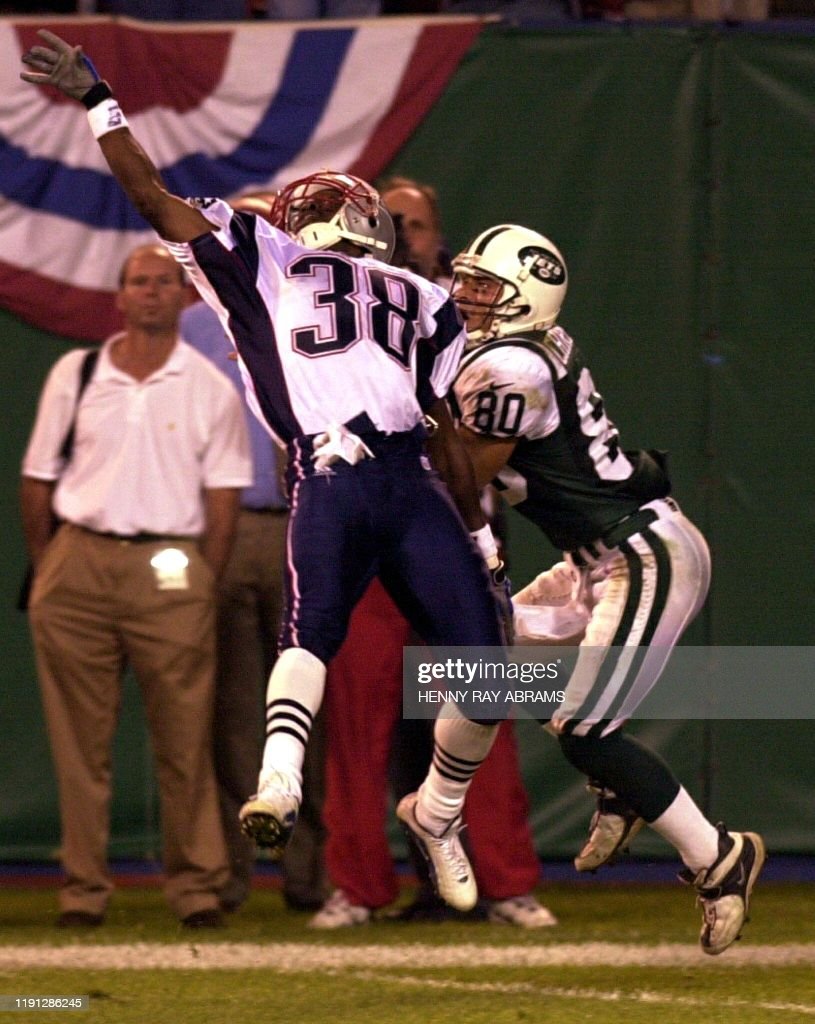 Sept 11, 2000: Wayne Chrebet gets behind Langham to catch the winning touchdown with under two minutes to play at Giants Stadium​

Rich Griffith was on the field for just three games with the Patriots. From 1995 to 2000 he played in 87 games with Jacksonville as a backup and special teamer. The New England Patriots announced today that they have signed veteran OL Brian Schwenke. Terms of the contract were not announced.

- Sean Conover, 37 (7/31/84)
Born in Brockton, grew up in Whitman; went to Whitman-Hanson High School
Played defensive end briefly with the Rams and Titans from 2006-2009, and then with the Hartford Colonials of the United Football League in 2010.

www.patriotledger.com
​
Whitman’s Sean Conover was one in a group of 22 players waived by the Tennessee Titans as they cut their roster to the NFL regular-season limit of 53 on Saturday.​
​
A 6-5, 275-pound defensive end, Conover signed with the Titans as a rookie free agent out of Bucknell University in 2006.​
​
In two seasons with the team, the 24-year-old Conover appeared in 11 games, starting two, totaling 25 tackles.​
​
On Thursday night, Conover appeared in the Titans’ 23-21 preseason win at Green Bay and made one tackle. His most productive game this summer occurred in the Titans’ second preseason game when he contributed two tackles to their 17-16 win over the Oakland Raiders at Tennessee’s LP Field.​
​
After earning a spot on the Titans’ practice squad as a rookie, Conover was promoted to the team’s active roster on Nov. 22, 2006, and went on to finish that year with 21 tackles in six games, including two starts. His most productive day as a pro occurred in his NFL debut when he was credited with seven tackles and a quarterback pressure from his right end position in a 24-21 victory over the New York Giants in Nashville.​
​
Conover appeared in just five games, all in a reserve role, and made four tackles last year.​
​
A standout defensive end-tight end and star forward on the basketball team during his days at Whitman-Hanson Regional High School, Conover went on to Bucknell where he began his career as a tight end and was shifted to the other side of the ball when Tim Landis took over as head coach.​
​
A two-time All-Patriot League selection at Bucknell, Conover was voted the league’s defensive player of the junior when he boasted career highs in tackles (55), tackles for loss (18), sacks (10.5), forced fumbles (five) and passes defensed (four).​
​
He left Bucknell ranked fifth in school history in sacks with 17.5.​

Other notable pro football players born on July 31 include:

- QB Norm Snead, 82 (1939)
The second overall pick of the 1961 draft was named to four pro bowls - and in four other seasons led the NFL in interceptions. Snead played with Washington, Philadelphia, the Vikings, Giants and 49ers from 1961 to 1976.

- OT Chris Hinton, 60 (1961)
Before Ogden came along, Hinton was the best left tackle in the NFL. Went to seven pro Bowls for the Colts and Falcons.

wow art graham...another one of my favorites as a kid. didn't know he was from somerville.
C

tuckeverlasting said:
wow art graham...another one of my favorites as a kid. didn't know he was from somerville.
Click to expand...

As am I...born at Somerville Hospital, lived on New Hampshire Avenue (part of the States neighborhood) near Foss Park, before I-93 construction cut those streets in half...
T

captain stone said:
As am I...born at Somerville Hospital, lived on New Hampshire Avenue (part of the States neighborhood) near Foss Park, before I-93 construction cut those streets in half...
Click to expand...

oh nice....born in arlington at a hospital that no longer exists...symmes.
You must log in or register to reply here.

July 17 in Pats History: Jerry DeLucca, the Pride of Peabody