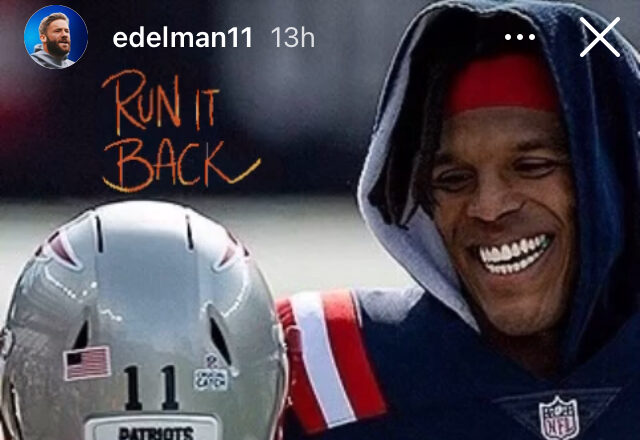 Good morning, here is your Sunday Patriots news 04-11 and Mock Draft 3.0 after the initial wave of free agency is over, the picture is a bit clearer as the team filled many of their holes.

Bill Belichick: The Patriots head coach is slated to have his pre-2021 NFL Draft press conference on Thursday, April 15 at 2:00 p.m.

Ross Reynolds: The Patriots announced on Friday that they have released OL Ross Reynolds, who they signed to their practice squad on November 30, 2020.

He has not appeared in an NFL game. Reynolds was activated to the 53-man roster on Jan. 2, 2021, and was active but did not play in the 2021 regular-season finale against the New York Jets. According to @Patscap, since Reynolds was not part of the top 51 or had any guaranteed salary, his release doesn’t impact the salary cap.

Salary Cap Questions? Ask Miguel: Speaking of Miguel, there is no one with more knowledge when it comes to NE’s salary cap than our old buddy Miguel Benzan aka @Patscap. If you’re going anywhere else for salary cap information, you’re doing yourself a disservice.

Julian Edelman – Sadly, but not surprisingly, it appears less and less likely that the Patriots clutch WR will play for the Patriots and possibly in the NFL again.  According to the Boston Herald’s Karen Guregian on Thursday, quoting a “source familiar with Edelman’s situation,” that it’s “doubtful” Edelman “will be able to play the entire 2021 season.”

Edelman is recovering from a knee injury that limited him to just six games last season and limited him in several of those. He underwent a surgical procedure on that knee in late October. It’s been reported that his situation is a bone-on-bone issue.

If Edelman can’t get healthy, he could opt to retire this offseason. Releasing or trading him would save the Patriots roughly $3.4 million in salary-cap space while leaving behind $2.7 million in dead money.

4th & 2 Podcast – If you haven’t checked out our PatsFans.com podcast, “Patriots 4th & 2” in a bit, please check it out. Derek and I recorded an NFL Draft podcast that looked at offensive possibilities.

Tom House Believes Cam Newton Is Going to be Better in 2021:

There was a collective groan across New England when the Patriots re-signed QB Cam Newton to a one-year deal that was heavily laden with incentives. While many fans and talk radio dinks lamented about the “up to” amount of cash Newton could earn, they forgot (or ignored) that for Newton to earn all of that cash would require the Patriots to win the Super Bowl.

While he struggled mightily at times in 2020, his throwing coach, former MLB pitcher Tom House, who also works with Tom Brady, believes that Newton is going to be much improved in 2021.

House was the guest of NBC Sports Boston’s Patriots Talk podcast with Tom Curran and Phil Perry and said that a year ago, Newton was still recovering from injuries he suffered while still a QB for the Panthers.

“What people don’t realize is Cam has been injured. He hasn’t had the ability to work on mechanics like he should or could have because his health was an issue,” House said. “And what you saw with the pandemic and all the upheaval and weird things that were going on with the day-to-day process, he probably didn’t have the time, or what I would say — his efforts had to be directed toward just plain competing.

“But Cam is a great athlete. I got to know him a little bit when he was working on his shoulder rehab. There’s nothing he can’t do. You’ve seen it — he’s a physical specimen. He’s still in his skill acquisition window, so I’m going to assume that the people there can help him with his throwing mechanics.

“I think his foot injury bothered him more than his shoulder injury,” House explained. “These athletes throw with their feet. The quicker their feet, the quicker their release. He went through a full year where he couldn’t step and throw without pain in his foot.”

“But Cam will throw the ball better this year than he did last year. He was in a reframing, a repatterning mode during the COVID stuff, and because of all ofl the weird, unpredictable things, wasn’t able to focus on mechanics as much as he should. Don’t bet against him because he’s physically one of the best athletes I’ve ever been around.”

With the free-agent frenzy in the rear-view mirror, the upcoming draft may quite possibly see a QB feeding frenzy with the top 4 picks in April. Once again, we tried to trade up for the #4 pick during our Mock Draft 3.0 but the cost was too prohibitive. I know the Patriots reportedly reached out to Atlanta for the #4 pick. But more and more, with the cost probably higher than they would pay, I am beginning to doubt Bill Belichick will pay it either.

So, with the top 5 QBs gone by the 10th pick, there was no reason to try to move up. But in this mock the Patriots made three trades,

So, here our picks, and a brief bio of each is written below. 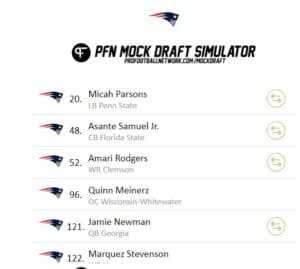 1st Round, Pick #20 Micah Parsons, LB, Penn State: Parsons is arguably the best linebacker in the draft, and it is a surprise to see him fall this far on the big board, possibly due to some off-field concerns.

Prototypical size and build of an NFL linebacker, he possesses tremendous flexibility, speed and explosiveness, with top notch instincts. Initially recruited to Penn State as a pass rusher. Wasn’t asked to cover much as his value as a pass rusher was deemed too valuable. He has the ability to a cornerstone of the defense for years to come.

2nd Round, Pick #48 Asante Samuel, CB, Florida State: Samuel is a versatile corner that can play inside or outside, even free safety in the future. While Samuel isn’t the biggest corner at 5’11, 185, he excels in both man and zone coverages. He is very physical and has very good change of direction skills.

PFF said of him, “He may be the single most gifted mover in the cornerback class when you consider speed, burst, agility, change-of-direction ability, and leaping ability. He could be described as “plus” in all of those categories.”

2nd Round, Pick #52 Amari Rodgers, WR, Clemson: New England needs a new slot receiver (see above) and Rodgers checks the blocks. A slightly smaller (5’9, 211) slot receiver that can also be an effective punt returner, Rodgers is at his best with the ball in his hands in the open field.

He can be a vertical threat and would give the Patriots a lot of YAC (yards-after-catch), he’s a very hard worker who has some limitations with his length and the occasional concentration drops but also makes highlight reel 50/50 catches frequently.

3rd Round, Pick #96, Quinn Meinerz, OL, Wisconsin-Whitewater: A small school stud, Meinerz has good size at 6’3, 314 and projects to an interior OL in the NFL. Meinerz can play guard or center and would quickly earn a backup spot in the NFL. But if any injuries occur this season, this guy could step right in.

While just average athletically, Meinerz is very strong and acquitted himself very well at the Senior Bowl in Mobile. He’s an excellent run blocker and a good pass blocker who will only get better with time.

4th Round Pick #121, Jamie Newman, QB, Georgia: Newman is a bit of an enigma. He played at Wake Forest and then transferred as a graduate student to Georgia. However, COVID-19 threw a monkey wrench into the works.

Solidly built at 6’3, 235, Newman is strong and throws well on the run, but has a tendency to stare down his receivers. His short game is good but his accuracy in the intermediate and deep game is spotty. After opting out in 2020, Newman looked like a QB that hadn’t played in a year. He’s an intriguing prospect but will require time to develop. Don’t look for him to play at all in 2021.

Stevenson was a big-play threat with his speed at Houston, and could, with time and coaching, develop into a nice vertical threat. He tracks the ball well, always seemed in sync with his QBs, and makes the difficult catches. Looked strong at the Senior Bowl.

5th Round, Pick #139, Monty Rice, LB, Georgia: Rice is built more like the typical NFL linebacker today than the guys the Patriots covet. However, although slightly undersized at 6’1, 235, he has excellent speed to play all over the field.

Rice is an excellent run stuffer as an inside linebacker in a 3-4 scheme. Many consider him to be a liability in coverage. I disagree here, I think with his speed, he can be a good coverage player on passing downs.

6th Round, Pick #180, Elijah Mitchell, RB, Louisiana: Mitchell reminds me a lot of Damien Harris of the Patriots and that isn’t a bad thing. Solidly built at 5’10, 218, Mitchell runs hard and smart, with good vision, cutting back against the grain.

He dropped about 10 pounds before his Pro-Day and ran a blistering 4:32 in the 40. He’s a good runner between the tackles with above-average traits catching the ball out of the backfield. He’d be an excellent member of a running back by committee rotation.

6th Round, Pick #188, Ashari Crosswell, S, Arizona State: Crosswell is a tall athletic free safety who plays best with the action in front of him. But he comes with off-field issues as he was suspended off the AZ State team.

He possesses good range and covers a lot of ground with good ball skills. Off-field concerns may block teams from drafting him but he flashed skills in 2019.

6th Round, Pick #197, Cornell Powell, WR, Clemson: Powell was riding the bench at Clemson but became a starter due to injuries and exploded onto the scene in 2020. Possesses good size at 6’0, 205 and put up good numbers with 53 catches for 882 yards and seven TDs.

Has only one year of production but has good footwork and speed and has the athleticism and versatility to play inside or outside and played on all four special teams units.

7th Round, Pick #230, Patrick Johnson, Edge, Tulane: Johnson was a three-year starter who was terrific rushing off the edge. Although he lacks the strength to be an every-down player, he plays faster than his timed speed and could find his way onto the roster as a subpackage pass rusher and STs contributor.