The 1968 draft was just the second combined NFL-AFL draft, after the two leagues had agreed to merge. In the third round the Pats elected to add speed to a wide receiving corps that was aging, selecting 6'1, 190 pound Aaron Marsh. He was a tailback for his first two years at Eastern Kentucky, then switched to wide receiver.

Marsh was a Little All-American for the Colonels who was ranked sixth nationwide statistically with 70 receptions for 1,069 yards and nine touchdowns. Marsh also excelled on special teams in college. In 1967 he averaged 17 yards on his 25 punt returns, and 27.7 yards on kick returns. Marsh was known for his speed; he was a 9.7 second sprinter on the track team.

In 1967 the NCAA set up four college division championships (what is known as FCS now). The Mideast Region consisted of a ten state area with over 100 schools, with the championship to be determined in the Grantland Rice Bowl. NCAA rules at that time did not permit freshman to play, which kept EKU's starting running back and fullback on the sidelines. (At the time individual conferences determined eligibility, not the NCAA.) The coach moved Marsh, one of the team's tri-captains, back to tailback for the game. Marsh ran for 46 yards, caught three passes and returned two punts for 39 yards - all in the first half - before being forced from the game with a back injury. Eastern Kentucky went on to win the title by defeating Ball State 27-13.


A tailback his first two years for Coach Roy Kidd, Aaron Marsh switched to wide receiver for his final two collegiate seasons and rode that transition into the professional ranks.​
​
Marsh, one of the first African American student-athletes at Eastern Kentucky University, was a two-time All-Ohio Valley Conference selection (1966 and 1967) and selected to the All-Time OVC team. A First Team All-American as a senior, Marsh was invited to play in an All-Star game following the 1967 season.​
​
Marsh was a third-round selection of the American Football League’s Boston Patriots. He earned 1968 Rookie of the Year honors after making 19 catches for 331 yards and four touchdowns. Marsh also played for the Patriots in 1968. He averaged 22.7 yards per kick return that season, while also recording eight catches.​
​
Following his playing career, Marsh started and organized a little league for inner-city children in Compton, Calif. In the early 70s. For the past 20 years, Marsh has worked with at-risk kids and served as a mentor with Big Brothers.​ 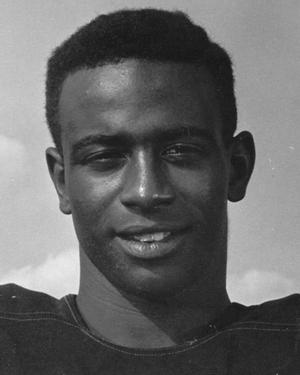 Aaron Marsh had a decent rookie season - 19 receptions for 331 yards and four touchdowns - but he played only four more pro games after that. While he was fast as lightning, he just didn't have the hands to make it in the pros. Marsh finished his career with 16 starts in 28 games played, averaging 16.3 yards on 27 receptions. He had 439 yards receiving and four touchdowns, and also averaged 21.0 yards on ten kickoff returns.

From the book From Darkness to Dynasty: The First 40 Years of the New England Patriots:


More typical of the type of players the roster was filled with by 1968 were rookie wideouts Bill Murphy and Aaron Marsh. The book on Murphy was that he had great hands, but was not only too slow to get open, he also had terrible eyesight and couldn't see a ball thrown his way. Marsh's problems were the opposite. He was fast, a terrific route-runner with great vision, but he couldn't catch the ball to save his life.​
On one occasion, the Pats were set to play a road game in the Houston Astrodome. On the day before the game, the team held a workout in the stadium. The players finished practice, showered, dressed, and went back to the hotel. What no one noticed was that their rookie receivers were nowhere to be found, and no one knew what had become of them. That is, until the hotel switchboard got a frantic, panicky call from someone asking to speak to anyone with the Patriots. It was Murphy and Marsh on the line, calling from inside the stadium. They'd wandered off, somehow managed to get lost, and couldn't find their way out.​
The joke among the writers was that an Astrodome security guard saw them and tossed them their keys, but Marsh dropped them and Murphy couldn't find them.​


The Patriot nosedive of the late sixties began when the entire roster seemed to age simultaneously, creating a situation where there were too many holes to fill at once. That problem was exacerbated when poor management yielded less than stellar drafts. Here is a look at the 1968 draft - which is sadly somehow actually better than what would happen over the next four years in the post-Mike Holovak, pre-Chuck Fairbanks era.

The only thing preventing this draft from being a complete disaster were three late picks:

Granted this is with the benefit of hindsight, but here is what the Patriots could have done, beginning with not drafting a player with alarmingly bad knees at number five overall: 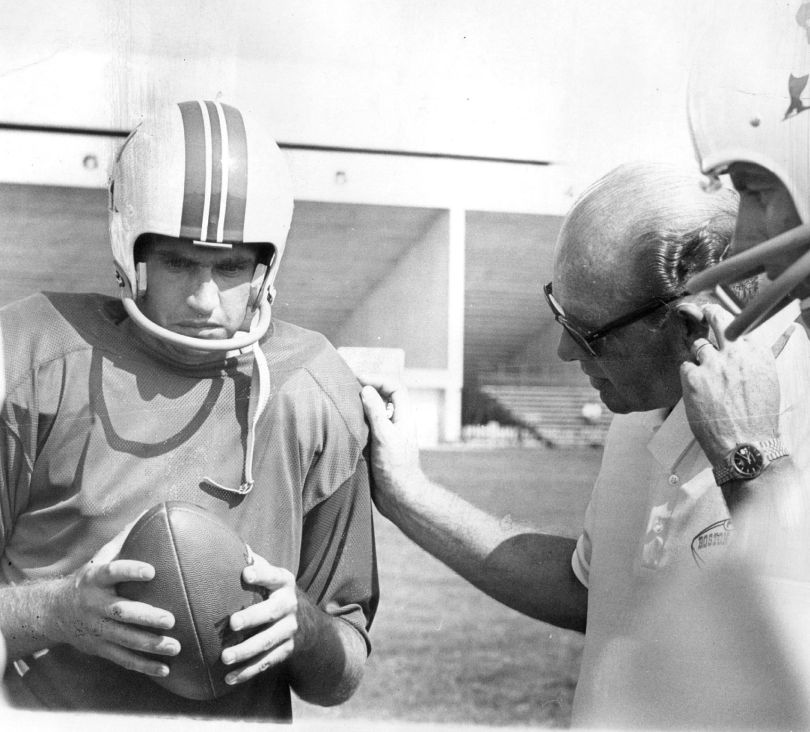 July 27, 1970: Brian Dowling, the former Yale All America quarter back , discusses plays with Patriots coach Clive Rush
at the UMass training site in Amherst. Dowling is seeking a spot on the Boston squads.​ 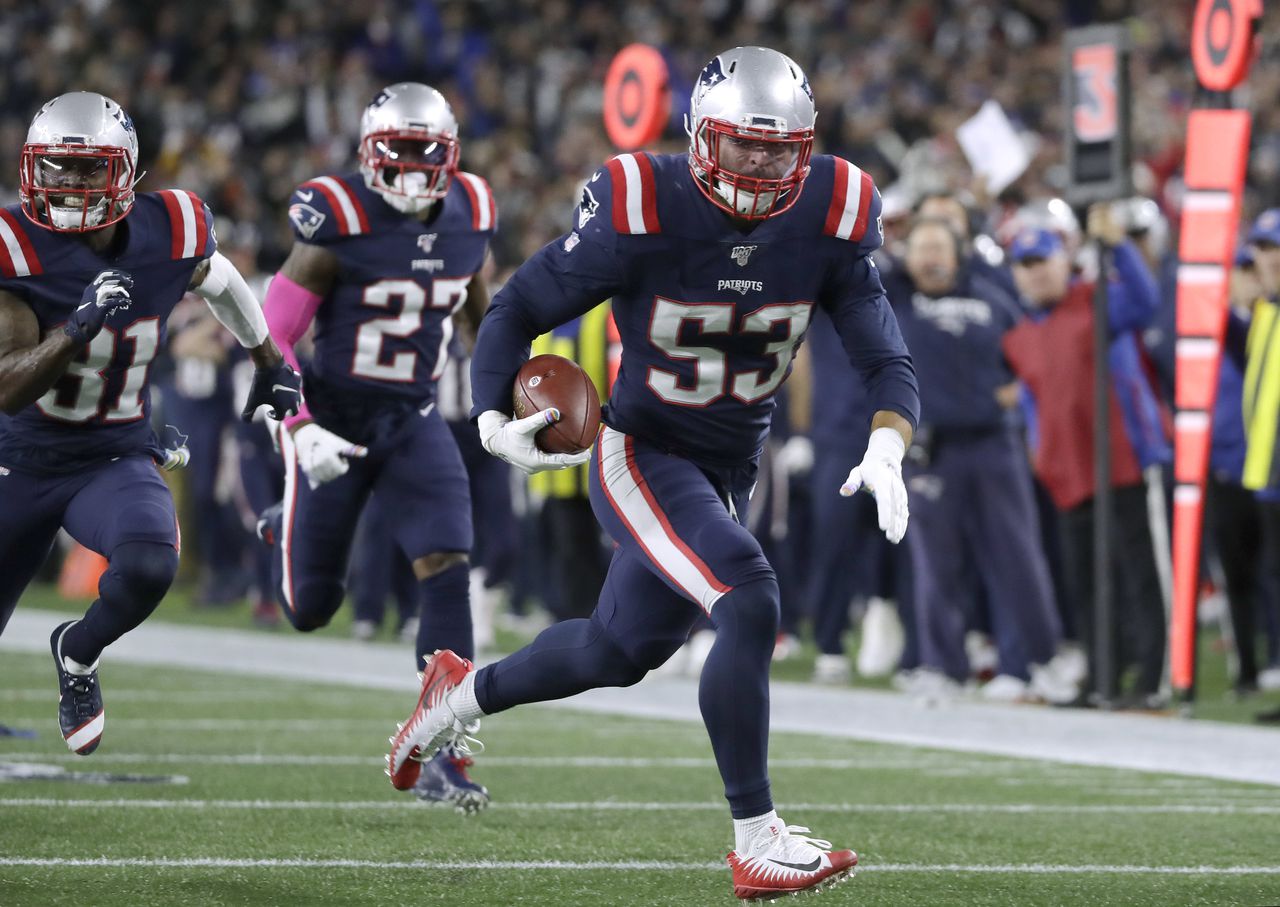 Van Noy and Brown are both starting their second stints in New England on the shelf. 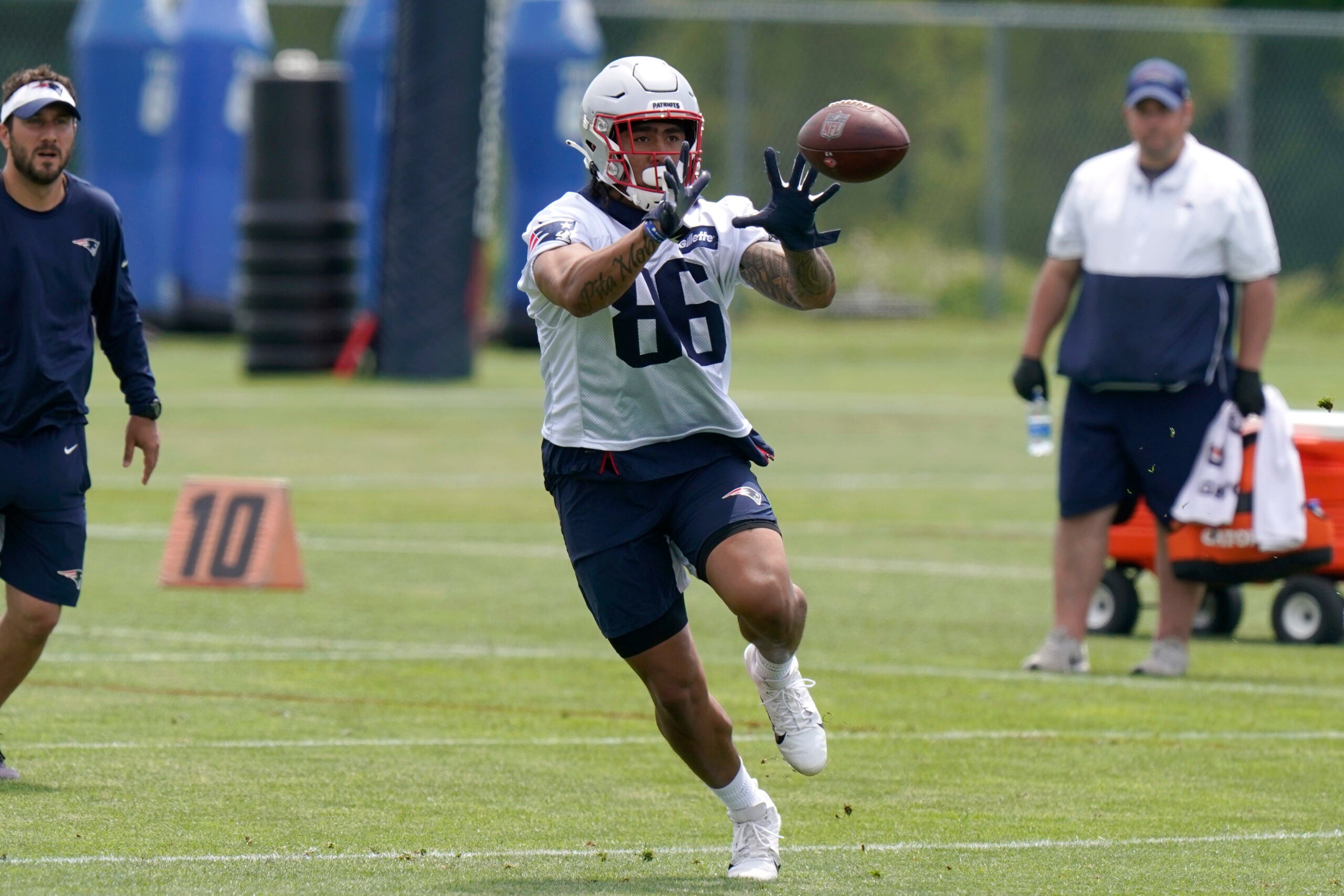 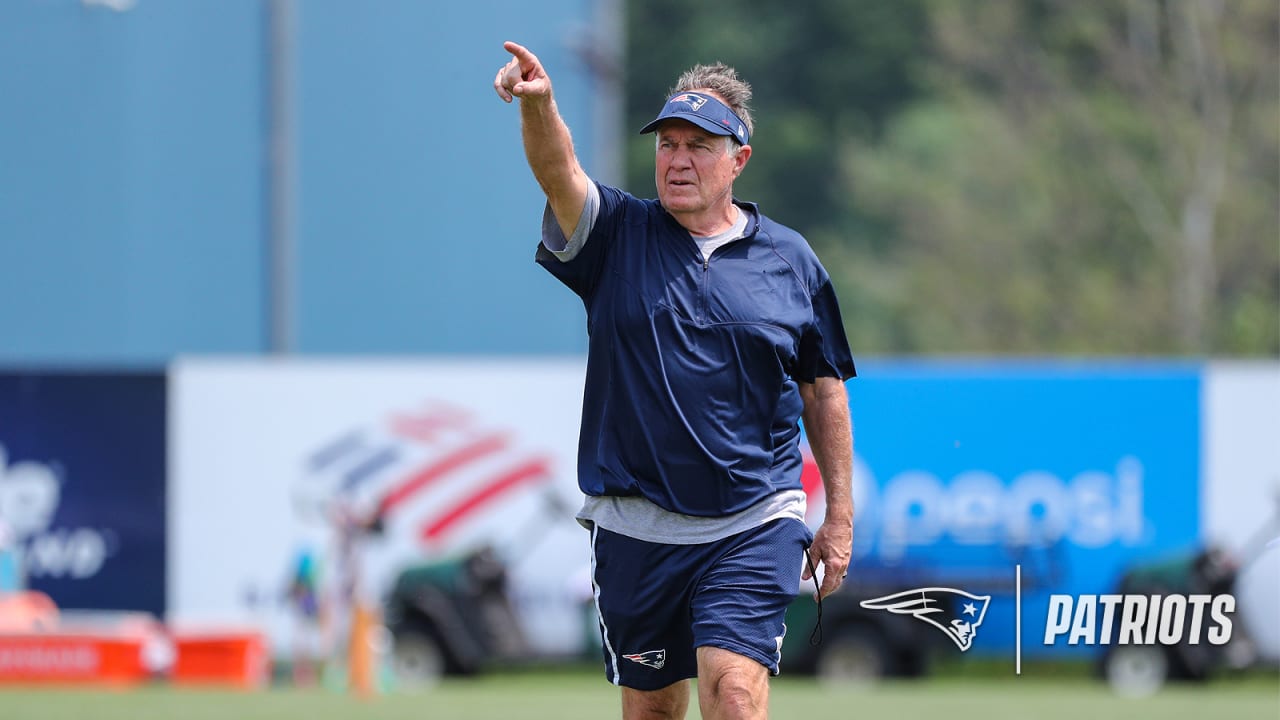 NFL Notes: Pats PUPs not quite ready to go

With training camp set to open, the Patriots have several players not physically ready to go. 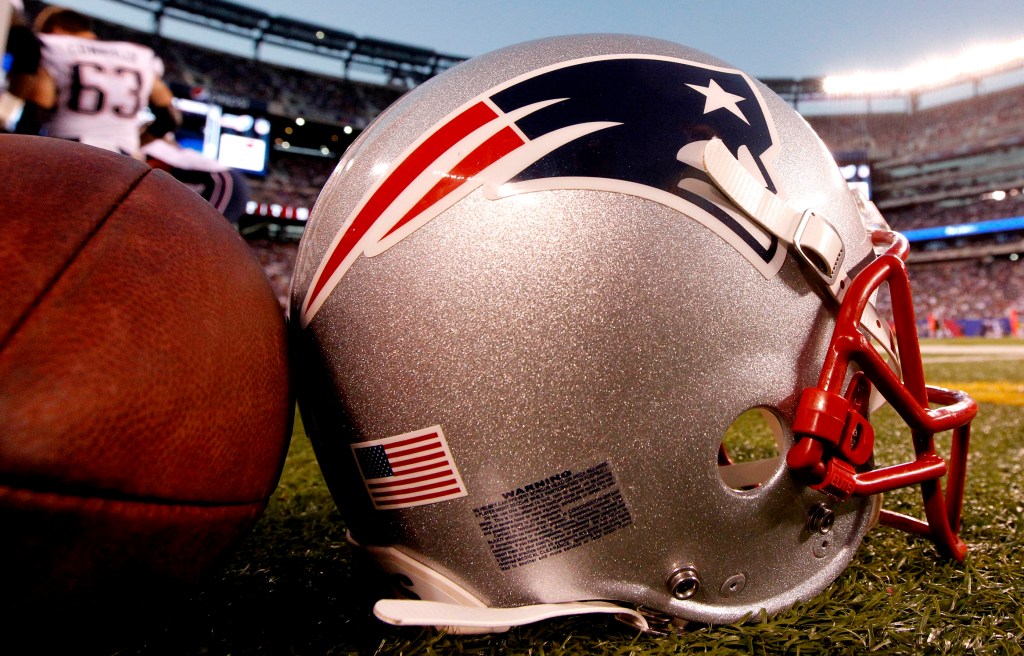 Smith originally joined the team when he signed to the Pats’ practice squad last December. NFL Rumors: Patriots re-sign WR Will Hastings one day after cutting him

Will Hastings' time away from the New England Patriots didn't last long. The undrafted rookie wide receiver was cut by the team along with nine other players over the weekend, but he was re-signed on Monday according to Jim McBride of The Boston Globe. 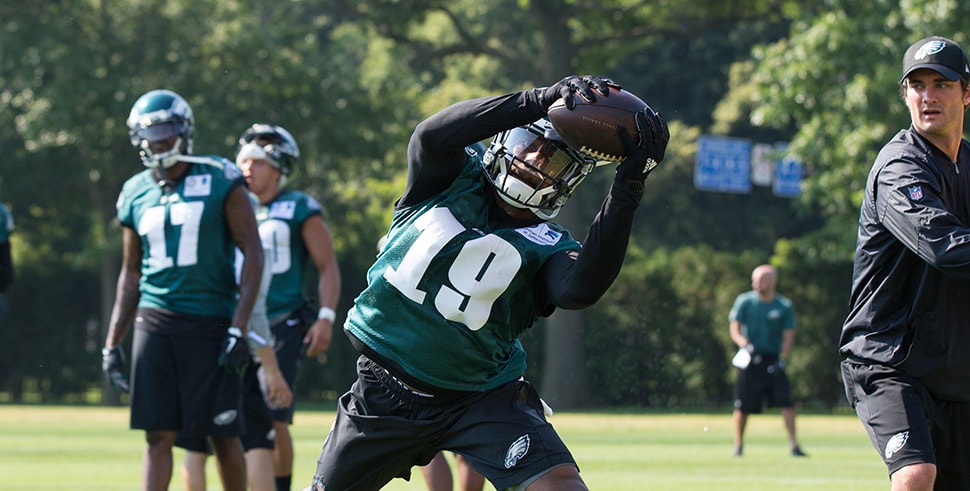 The New England Patriots have made their first roster move of the training camp portion of the 2018 season, cutting Troy Niklas and signing Paul Turner.


Other pro football players with New England connections born on July 27 include a player that was involved in both Rob Gronkowski and Julian Edelman becoming New England Patriots:


Harold A. Broda '27, captain of the Iron Men and one of Brown's finest ends, had a flair for the spectacular when he stepped on the football field. The long, lean Broda was a track man, and he used his speed to good advantage on the football field. His quickness was obvious on defense, where he would frequently follow a play to the other side of the field and catch a runner from behind. He also used his speed on offense, becoming a favorite target of passing star Dave Mishel.​
​
Also one of the best track men in the East, Broda ran the 100 and 220. In three consecutive meets in 1925, the native of Canton, OH, won five of six races in these two events against Columbia, Amherst, and Williams. Broda played pro football for the Cleveland Bulldogs.​
C

The joke among the writers was that an Astrodome security guard saw them and tossed them their keys, but Marsh dropped them and Murphy couldn't find them.