Its that time of year. Who are your draft binkies for 2021 ?

I really like TE Tommy Tremble from Notre Dame. The guy is the ultimate teammate, he'll do anything for the team to win. Ferocious blocker who was an underused receiver. People are predicting he will run a 4.60 forty, so very athletic. Seems like a typical Pat's type player.

Another player I like is TE Matt Bushman from BYU. Extremely productive, but missed all last year due to injury. Really good receiving TE.

2021 Weekly NFL Picks Winner
It's still too early for me. I need some pro-day numbers.
That said, I've been a big fan of Elijah Moore all year.
Others include: Jaycee Horn, Daviyon Nixon, Kenny Gainwell and #1 on my wish list: Trey Lance.
There's more players I really like. It's a deep draft, not in star players but solid through 3 or 4 rounds.
S

I've only started on 1st round guys so far, but I've fallen in love with Jaycee Horn and Kwity Paye. Would love either at 15.

I also really like Elijah Vera-Tucker and Zaven Collins.
O

CB newsome of northwestern - probably better in zone, but developing as a press man cover. Best replacement for Gilmore I have seen in this draft.

OT brown of northern Iowa - a massive monster who buries people in the run game. Needs help in pass protection,

Number 1 favorite player WR waddle of Alabama - lightweight but super fast, most sudden player in college football. A threat every time he steps on the field. Eats up defensive backs like they pez!

If we lose James White, I’d like to get RB Michael Carter from North Carolina. Great vision and elusiveness, good lower body strength despite his size, and GREAT hands out of the backfield.

While doing some research on Davis Mills of Stanford, I really fell in love with WR Simi Fehoko. Just always seemed to be open, he’s 6’4” 225, has excellent hands and excellent speed (ran a 4.37 at his pro day).
J

If we lose James White, I’d like to get RB Michael Carter from North Carolina. Great vision and elusiveness, good lower body strength despite his size, and GREAT hands out of the backfield.

While doing some research on Davis Mills of Stanford, I really fell in love with WR Simi Fehoko. Just always seemed to be open, he’s 6’4” 225, has excellent hands and excellent speed (ran a 4.37 at his pro day).
Click to expand...

Felton from UCLA could be a fit too
O

JerseyShore99 said:
Felton from UCLA could be a fit too
Click to expand...

felton should appeal to bb given his versatility and playmaking ability.
M

PatsFans.com Supporter
Quinn Meinerz OG/OC from D III Wisconsin Whitewater ... he will be a beast for whoever takes him. His Pro Day measurables were all in the 90th percentile ALL TIME for a OG. In the Senior Bowl practices he obliterated the D lineman he went up against. I hope Bill has the balls to take a player from a lower division two years in a row.
T

Spencer Brown isn't as much of a sleeper now, but he is compared by some to Nate Solder: 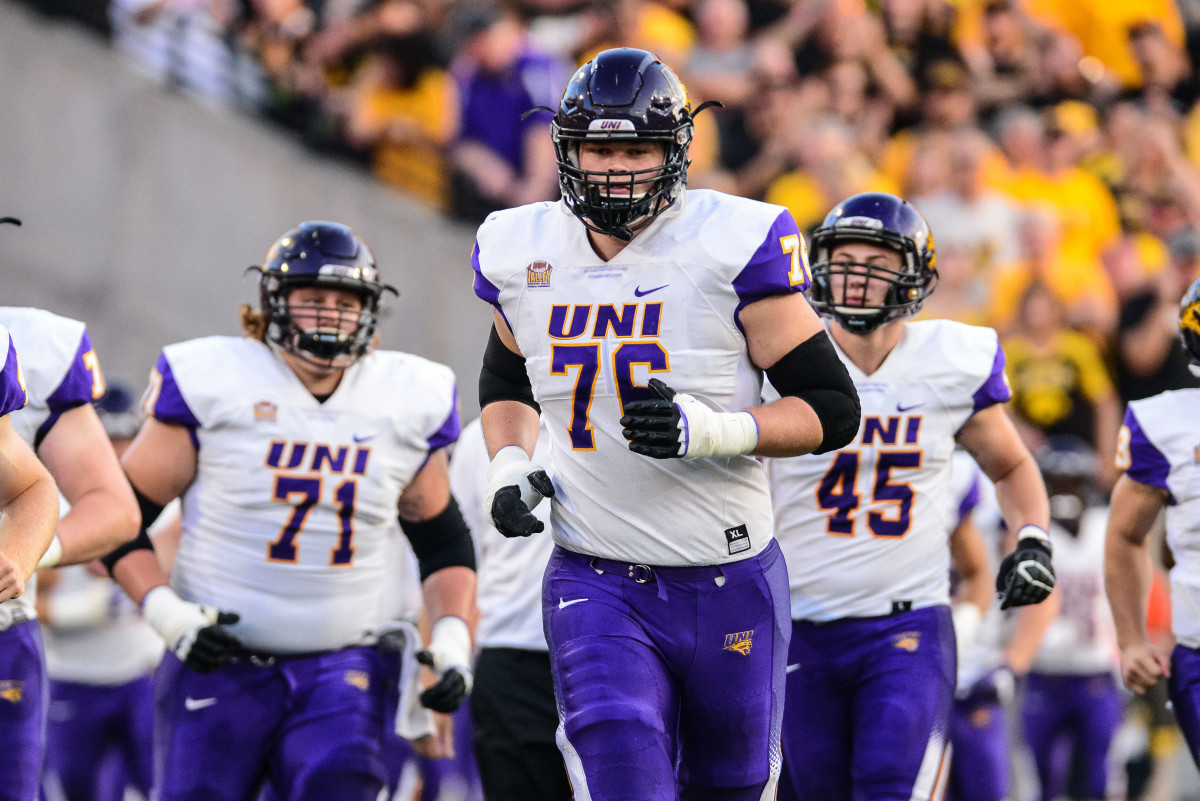 Should Northern Iowa tackle Spencer Brown be selected in the first round of the NFL Draft?

Assuming that the price for the top 5 quarterbacks is too high and the right talent doesn't drop to pick 15, trading back out of the first round wouldn't be a mistake to pursue high upside talent. Trade back with Jacksonville for 33, 45 and a 7th rounder this year or next? Something like this would be exciting for me: 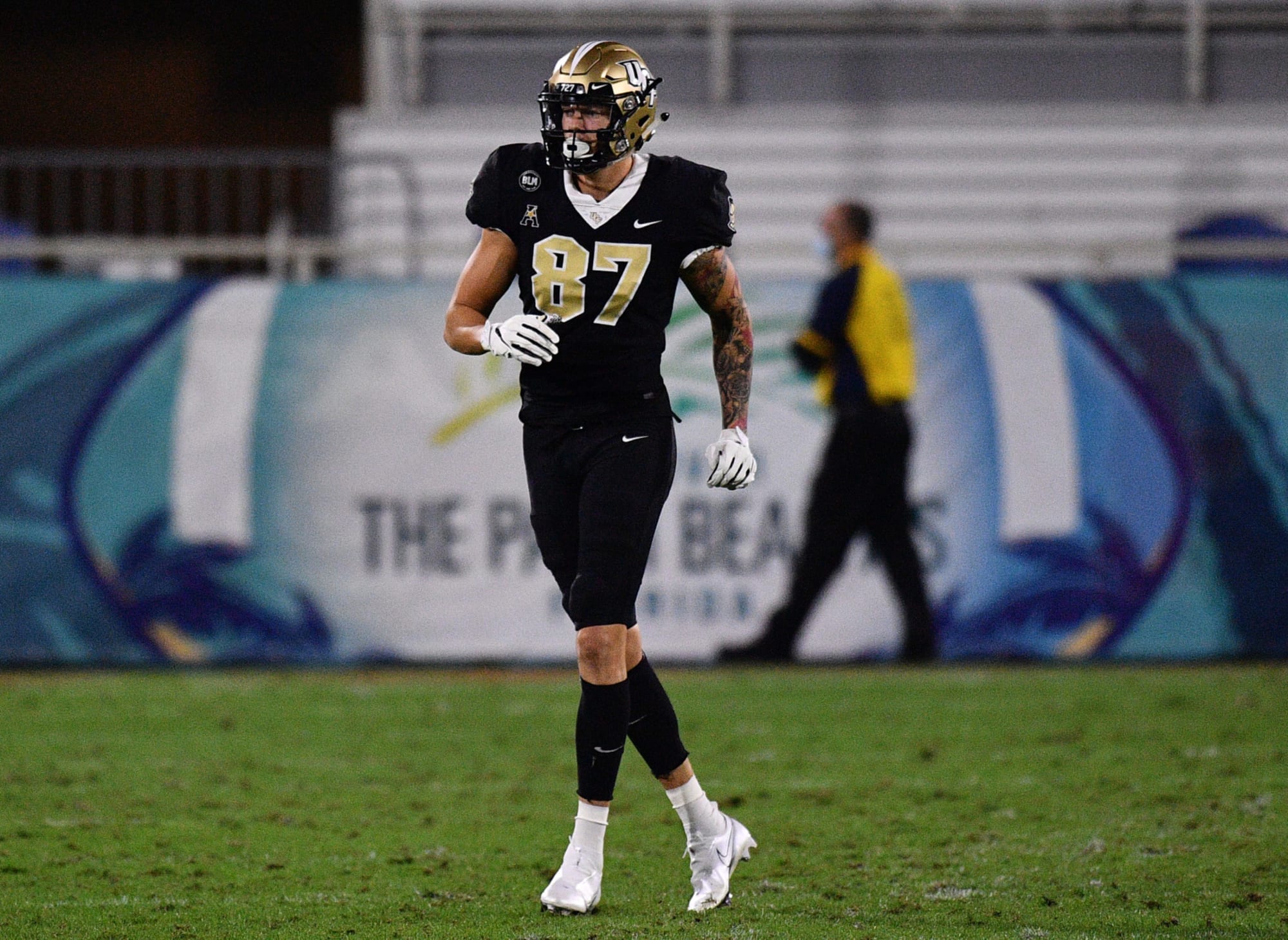 Patriots: Why UCF’s Jacob Harris could be perfect fit for offense

What's the usual universal characteristic that makes for a true Bill Belichick player? Versatility. Every New England Patriots fan knows that. However, tha...

The Boomer said:
Spencer Brown isn't as much of a sleeper now, but he is compared by some to Nate Solder:

Should Northern Iowa tackle Spencer Brown be selected in the first round of the NFL Draft?

I really hope bb takes this kid or forsythe from Florida.

we need giants on the offensive line that can blow people off the ball.

Trey Lance: He’s been the QB I wanted most for the Pats out of this draft. My rankings changed to Justin Fields during the research process, but I don’t think Fields makes it past the 3rd pick. Lance is someone they’d have to trade up for but I’d be all for it.

Kyle Pitts: He’s going to be a star. And I’m going to wish the Pats got him at any cost. But hard to justify after paying top dollar to the two top tight ends in free agency.

Jaylen Waddle: The farthest I see him falling is to the Eagles at 12. But if by miracle he’s still there, he’s who I want most on offense, injury concerns be damned. Should be healthy in time for the season and would immediately be our top receiver. Can also be a threat as kickoff returner.

Jaycee Horn: If the Pats aren’t trading up, then I hope this kid falls to 15 and the Pats scoop him up. My favorite corner in this draft. Would love to see him and Gilmore paired up for years to come.

Beyond the first round...

Javonte Williams & Michael Carter: In mock drafts I kept taking Williams for the Pats at 46 because of the value he presents. At worst he’d be a redshirt RB4 for his rookie season (much like Shane Vereen was when he was taken in the 2nd in 2011), and then ready to step in once Sony Michel becomes a free agent. At best he’d carve a role in the offense right away with the upside to be the best RB in the rotation. As for Carter, he can be had a little later and would be a natural fit as the successor to Rex Burkhead. He’s very quick with his feet and shows good running power for a player of his small height. Either Tarheel would be a welcome addition.

Kelvin Joseph: Maybe it’s because I kept stealing him in the 4th round and I don’t suspect he’ll last that long in the real draft, but if the Pats don’t take a corner before then and Joseph is there in the 3rd or 4th round, he’d be a heck of a pickup. Some say he has the potential to be the best corner in this year’s class. Likely won’t make it past the 2nd round.

Ihmir Smith-Marsette: When looking at wide receivers who are expected to go late in the draft, Smith-Marsette stands out to me as a possible steal. Might be that I just really liked what I saw out of his last game. But I have a hunch that he’s going to outproduce his draft position.

A few guys flying a little under the radar that I like...

Username said:
A few guys flying a little under the radar that I like...

Moore will be a star

how many binkies am I allowed?