2 weeks ago at 5:00 am ET
Follow @SteveB7SFG
Posted Under: Patriots Commentary 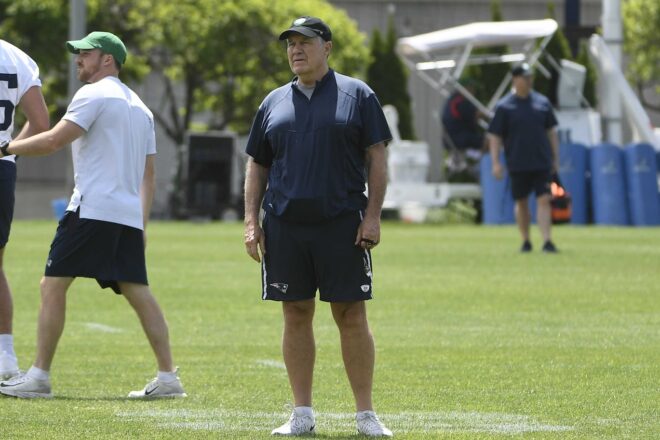 Good morning; here are your weekly Patriots news 06-19, and some NFL notes this week.

The Patriots minicamp is in the books, the team is off until the players report to training camp in late July. We’ll be talking about our early, initial projections for the 53-man roster on our “4th and 2” podcast soon. But to get an early jump on things, I’ve included my thoughts below.

One caveat is that one can’t overreact too much to the t-shirt and shorts minicamp…however, (comma) we all tend to do that every year. So, we’ll try to balance what transpired at minicamp with some reasoning here.

Darryl Williams: The former Chief’s center has been signed to the Patriots’ 90-man roster according to NFL.com. Williams, a 6’3, 310 lb free agent was released by Kansas City after the team’s minicamp last week.

Williams spent most of his time on the Chief’s practice squad but did appear in limited action during last year’s preseason. He went undrafted out of Mississippi State in 2020.

Lil’Jordan Humphrey: The Patriots signed the veteran free agent to a one-year deal according to Ian Rapoport of NFL.com. Humphrey is anything but “Lil” as his name suggests, tipping the scales at 6’4, 225.

Gillette Stadium: The Patriots’ home which is undergoing some big renovations this summer has landed two huge events one for college football, and the other for futbol.

The Fédération Internationale de Football Association (FIFA), the international governing body of association soccer, announced on Thursday that Gillette Stadium has been selected as one of 16 host venues for the 2026 World Cup.

And the Army-Navy football game is coming to Gillette Stadium in 2023 for the first time in the 130-year tradition of the big rivalry game between the two senior service academies…”GO ARMY, BEAT NAVY”

Strong is a rookie RB out of South Dakota State who was drafted in the 4th Round, (127th overall) in the 2022 NFL Draft. The fastest running back in the draft, Strong had 11 touchdowns of 50-yards or more in his college career.

Patriots 4th & 2 Podcast: If you haven’t checked out our PatsFans.com podcast, “Patriots 4th & 2”, in a bit, please check it out. Russ and I posted a video of our thoughts on the best Patriots tight ends of all time.

The Patriots will have some tough decisions to make, especially on some players that they’ve invested in but in the quest for the 53-man roster cutdown at the end of camp. There will be the inevitable injuries and cases of the “Foxboro Flu” during camp, so that may open up a few spots for players that could otherwise find themselves released.

So, we’ll take an initial, if early stab at the roster.

Training camp should be an interesting competition to see who is the backup to Mac Jones. But make no mistake, whether he is the #2 or the #3, Brian Hoyer who has a guaranteed contract worth $3 million, is going to be on the roster.

Bailey Zappe, who set NCAA records for TDs and yards last season isn’t going anywhere either. With a skill set similar to Jones, he’s the backup of the future.

The 1-2 punch of Harris and Stevenson remains. James White begins the season on PUP which opens the door for the big, and under-the-radar Harris. Stevenson should see more targets in the passing game early. Strong is the “X-Factor” here. He is already a good pass blocker, something the Patriots insist on for their RBs. He’s also the most explosive back they’ve had in a long time. Don’t be surprised if he can work himself into the kicking game and is active on game days, that they try to get him the ball in space.

While the constant refrain (for nearly 20 years) continues to be “the Patriots don’t have a #1 WR”, they won six (6) Super Bowls without one, but they have a lot of depth this year. The competition here will be an area to watch during training camp.

If Tre Nixon continues to impress as he did in minicamp, it could give the team the option of trading Nelson Agholor which would save the team a bunch of needed cap space. Harry’s time here is done, time to move on.

With the Patriots having invested in Asiasi and Keene a few years ago in the draft, neither has made any impact and the clock is ticking. Look for the team to possibly bring back Asiasi to the practice squad or scour the waiver wire to add a third tight end later.

With both starting tackles having had injury concerns, the team opts to go heavy with the tackles, initially. I’m sticking with Desjarlais early but he could find himself in a battle for the 53rd spot with Russey.

Was tempted to go with six DLs (Henry Anderson) here but for now, will stick with who they have. The defensive line was an area that I thought definitely needed an upgrade, so perhaps younger players Ray, who had talent but was always injured at Alabama, and Roberts who was a small-school stud could have a chance to carve out a roster spot.

Judon is a stud, but Uche has had trouble setting the edge, although the team seemingly has big plans for him and Perkins. I’ve always believed in Jennings and the reports from minicamp had him getting quite a bit of play with the top units.

This is where (possibly) the Patriots could have a big change in how they’ve played the position for decades. Bentley is the only inside backer with experience in the system as Dont’a Hightower, Kyle Van Noy, and Jamie Collins are all gone. Wilson, McGrone, and McMillan are all smaller, faster, and more athletic. Will it work? We’ll see, but this is what we’ve been saying for quite a long time.

Hard to part ways with Langi, who I’ve always rooted for. He and Tavai, who play STs are the throwbacks to the bigger players they’ve always coveted. It will be interesting to see how this position plays out. But some of these players will above will have to chip in on the Special Teams units.

Big changes here from the beginning of last year, gone are J.C. Jackson and Stephon Gilmore. So, without a true shutdown #1 corner, there will probably be a lot of mixing and matching depending upon the opponent.

There is still a chance that they opt to keep seven CBs (Wade) to keep the depth up as high as they can. One player who will probably be relied on to play meaningful snaps is rookie Jack Jones who is one of three Jones’ in the secondary. He’s a player the team has high hopes for. Marcus Jones, the other rookie is recovering from offseason double shoulder surgery and could provide a big spark in the return game.

Plenty of versatility with this group, Bledsoe could still sneak onto the roster because of his versatility to play anywhere. Although he played mostly at the strong safety position. His teammates

But McCourty, Dugger, Phillips, and Peppers are a really strong group. Dugger may be freed up this year with Phillips and Peppers to play more in the center of the field, taking advantage of his athleticism.

No surprises here, the usual suspects return, the only addition is Schooler, who is an excellent athlete. He could replace the former ST standout, Brandon Bolden. Schooler and Bledsoe could be competing for a spot.

“I mean a good part of it, certainly not all of it, by any stretch. Fundamentals are fundamentals, so, if you have good fundamentals they transfer to other plays. If you have to go back and reteach fundamentals, then it’s hard to execute plays no matter how many plays you have in or don’t have in. Having a good fundamental base is a big part of installation. We work on the fundamentals to go with the installation, and then hopefully we go out there and can execute those plays and then move the process along. So, I don’t even know what our full installation is going to be. It’ll just depend on how things go and what we’re able to do. There’s no like, set ‘all this is going to go in.’ We’ll see what we need. If we need it – there’s things we know we’re going to need, and then there’s other things that as they come up, if we’re ready for them we’ll do them, if we’re not, we won’t.”

Patriots head coach Bill Belichick on how much of the offense and defense will be installed by the end of minicamp.

By: Ian Logue
New England Patriots news for 7/1 along with NFL notes in today's daily notebook.
22 hours ago