Pats Trivia: Today is 1st time team has ever played on January 15

Prior to today's game the fifteenth was one of just a few days the Patriots have never played in the month of January. Most are understandably late in the month during the period of time prior to the Super Bowl (25th and 28th through 31st); the only other day is the 17th.

This game will mark the 124th time these two original AFL clubs meet. Considering that they have been in the same division that entire time, it is not surprising that this is only the second time they have played each other in the postseason. The first came in 1963 when the two teams tied for the AFL East title. Unlike today those situations were settled on the field rather than with a list of statistical tiebreakers. The Pats won that game by the score of 26-8. Overall the Patriots lead the franchise series with a 77-46-1 record, thanks to a 35-4 advantage from 2000 through 2019. However, the Bills have won three of the last four by a margin of 105-65.

The Patriots 37-21 all-time in the playoffs, but only 4-5 in wild card games. The last playoff victory was three years ago when New England defeated the Los Angeles Rams by the score of 13-3 in Super Bowl 53.

The Buffalo Bills are 16-18 all-time in the postseason. After losing the AFL East tiebreaker to the Patriots in 1963, the Bills defeated the Chargers for the AFL Title in each of the next two years - back when it was a single playoff game following the regular season. From the 1990-93 seasons the Bills went 9-4 in the postseason, famously losing four consecutive super bowls. After that Buffalo went on a 15-year winless streak, not winning in the postseason again until they defeated the Colts and Ravens a year ago.

PatsFans.com Supporter
So you are saying the Pats are undefeated on January 15th. This is the Pats' day then.

Staff member
Aside from this being the first January 15th football game for the Patriots, this date is devoid of famous birth dates as well.

Bill DuLac was a seventh round draft pick by the Rams in 1973, from Eastern Michigan. The Patriots traded him to Green Bay on August 9, 1973, just 16 days after acquiring him from the Rams. DuLac spent the 1973 season the taxi squad for Dallas, then re-signed with the Patriots when the Cowboys cut him at the end of their 1974 training camp.

Perhaps of more interest is how Bill DuLac ever even came to become a New England Patriot.

Herb Adderley is a Hall of Fame cornerback; one of just four players at that time (five now: TB12) to win six NFL championships. Adderley played from 1961 to 1969 for Vince Lombardi and the Packers, then for Tom Landry in Dallas for three seasons. After being benched late in the 1972 season he was dealt to the Patriots for nothing more than a tenth round draft pick just before the start of training camp.

After this things get murky. It appears as though Adderley never reported to the Patriots and they traded his rights to the Rams in exchange for DuLac. Wikipedia makes no mention of the Patriots in their Herb Adderley bio, stating he refused to report to the Rams. Pro Sports Transactions says that the Rams waived Adderley with an injury settlement two weeks after the trade with the Pats.

Chris White was originally a sixth round draft pick by Buffalo in 2011, from Mississippi State. After two seasons with the Bills he was traded to Detroit for QB Thad Lewis; the Patriots picked him up off waivers less than a week later.

White appeared in 13 games the following season, missing three games late in the year with an ankle injury. He was on the field for 257 special team snaps and seven defensive snaps in the regular season, making seven tackles. White made four more tackles in the postseason, earning a ring from Super Bowl 49 versus Seattle. The Pats released White on August 10, to make room for a running back named Tony Creecy. 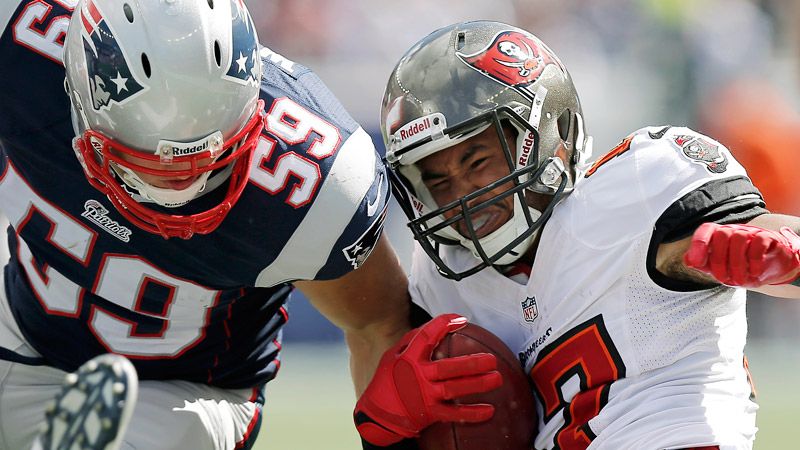 FOXBOROUGH, Mass. -- Receiver Wes Welker is the highest profile acquisition the New England Patriots have made for a player with AFC East ties. But he’s far from the only one. 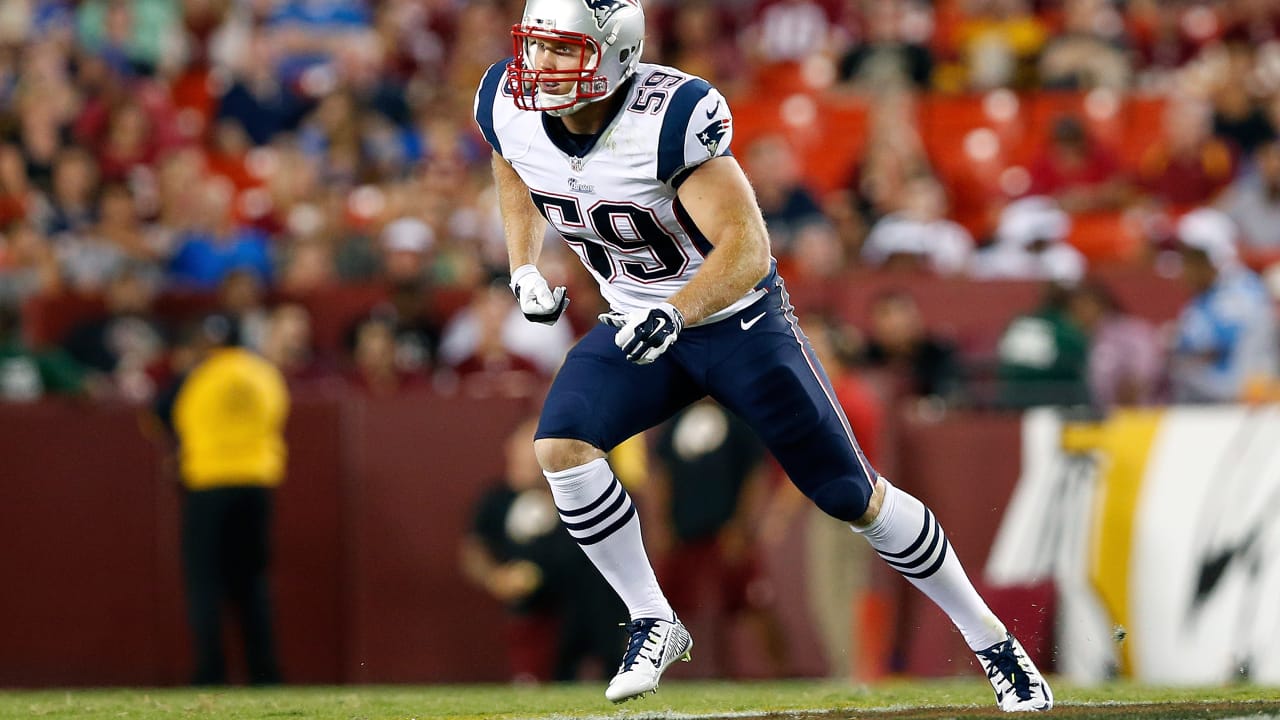 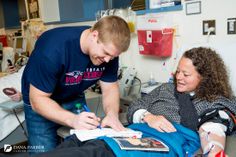 Fred DeRiggi was originally a seventh round draft pick by the Bills in 1990, from Syracuse. He played in the final two games of the forgettable 1990 season for Rod Rust. DeRiggi was with the Pats for the 1991 offseason but was released as part of roster cutdowns in late August - even though at that point he was reunited with his college coach, Dick MacPherson.

Syracuse-LSU: SU hopes rematch looks like 1989 all over again

Rob Drummond was the MVP of the Hall of Fame game 27 years ago when SU "punished" the Tigers 23-10. He's hoping for more of the same this weekend in the Carrier Dome.


Rob Drummond can still clearly remember the vibe the last time Syracuse shared a football field with the folks from Louisiana State.​
​
"They were just so arrogant leading up to that game," Drummond recalled Tuesday evening. "We got the same feeling from them that we got the year before from Auburn at the Sugar Bowl.​
​
"You know, they were from the SEC. They had the best conference in the land. They played the tougher schedule. The world revolved around them. All that stuff. Their thing was they were the ones who weren't going to lose to the team from the north."​
​
Drummond, the former Orange running back (via Jamesville-DeWitt High School), was speaking of the 1989 Hall of Fame Bowl in Tampa where 17th-ranked SU took on No. 16 LSU … and beat it 23-10 before a New Year's Day (plus one) gathering of 51,112.​
​
The two schools, which will meet again on Saturday afternoon in the Carrier Dome, haven't butted heads since. And there may have been a reason beyond geography.​
​
Hard feelings, anyone?​
​
"We didn't care if we won the game," said Drummond, who gained 122 yards (on 23 carries) and scored two touchdowns en route to winning the affair's Most Valuable Player award. "We just wanted to beat them up physically and show them that we could play football up north, too."​
​
Wait. The goal was to batter the SEC co-champion Tigers, first … and out-score them, second?​
​
"Correct," Drummond declared. "And we did beat them up. From the very first play. We knocked, like, five of their guys out of the game."​
​
But back in January of '89 things were different. SU, on a 25-4-1 run, had traveled to Tampa with a program stocked with 16 athletes who'd eventually suit up in the NFL. And 11 of them saw the field down there in Florida.​
​
Drummond, David Bavaro, Rob Burnett, Frank Conover, Fred DeRiggi, John Flannery, Daryl Johnston, Rob Moore, Markus Paul, Todd Philcox, Terry Wooden. Each a future pro, they all played that day, 27 seasons ago, against the Tigers, and the stats they compiled were remarkable ones as the Orangemen outrushed LSU 208-76 in yardage, nearly doubled it in first downs (24-14) and shut it out in both the first and fourth quarters.​


The Patriots cut their roster to 68 Monday by releasing four players, including Southington's Rob Thomson.​
​
Thomson, a free safety, signed with the Patriots as a free agent April 27. Thomson was a two-year starter for Syracuse and was the team's third-leading tackler in 1990.​
​
The Patriots also released tight end Randy Bethel, a 10th-round pick in April's draft, free-agent nose tackle Fred DeRiggi and free agent wide receiver Brian Wiggins.​
​
The Patriots must reduce their roster to 60 by 4 p.m. today.​
​
Dykes undergoes surgery​
Wide receiver Hart Lee Dykes, injured in Saturday night's 46-0 loss to Phoenix, underwent surgery on his fractured right kneecap. Dykes, who was a starter, is expected to miss the entire season.​
​
Dykes' injury moves second-year player Greg McMurtry into a starting position along with Irving Fryar. McMurtry, a third-round pick out of Michigan, caught 22 passes for 240 yards last season as a rookie.​

On April 21, 2001 the Patriots traded their third round (#69) pick of the 2001 draft to Minnesota, moving down 17 spots while adding a fourth round pick. The Pats used 3.86 to select CB Brock Williams, and 4.119 TE Jabari Holloway. Neither Williams nor Holloway ever registered a single stat with the Patriots.

Williams dressed for the first game of 2001, then tore his ACL. The following offseason he was limited with an ankle injury before being released on Sept 1, 2002. He went on to play 12 NFL games with the Bears and Raiders.

Holloway began the 2001 training camp on the PUP list, then was placed on injured reserve for the '01 season. He was waived a year later on Aug 25, 2002. The tight end played for two seasons with Houston, with 15 receptions and no touchdowns.

Kelly was a starter for two season with the Vikings, then asked for his release in the 2004 offseason after his playing time had dwindled. The Texans claimed Kelly off waivers, then released him when he refused to renegotiate his contract and take a pay cut. Kelly signed with the Bears but he was cut at the end of 2004 training camp, and he never played in the NFL again.

The names in these trades (and six degrees of Travis Lewis) get a bit more interesting.

On Sept 4, 2010 the Patriots acquired this draft pick plus LB Tracy White from Philadelphia in exchange for a 2012 sixth round pick. White would go on to play 42 games over three seasons with the Pats.

A month later New England traded 2012 draft pick 7.223 to Minnesota along with Randy Moss, in exchange for a 2011 third round pick. That pick was used to select QB Ryan Mallett.

In 2012 the Vikings made a draft day trade with Detroit, receiving a fourth round pick from the Lions. That fourth was one of four draft picks that Minnesota sent to New England in exchange for the Patriots' first round pick, 29th overall; the Viking used that on Cordarrelle Patterson. The Patriots used their picks on Jamie Collins, Logan Ryan and Josh Boyce. The Pats also later packaged a seventh round pick they received in the Minnesota trade with Jeff Demps, to trade for LeGarrette Blount.


One other player born on this date with a New England connection:

​
Obituary:​
He was traded to the Oakland Raiders but due to injury moved onto teaching and coaching. He was a successful football coach and English teacher at Waltham and Woburn High Schools. Later, Fran held several executive positions in the Wine and Spirits industry with companies such as Fleishmann's, Publicker, Standard Brands, and SoGrape.​
You must log in or register to reply here.

I
What If - super bowl run edition
2