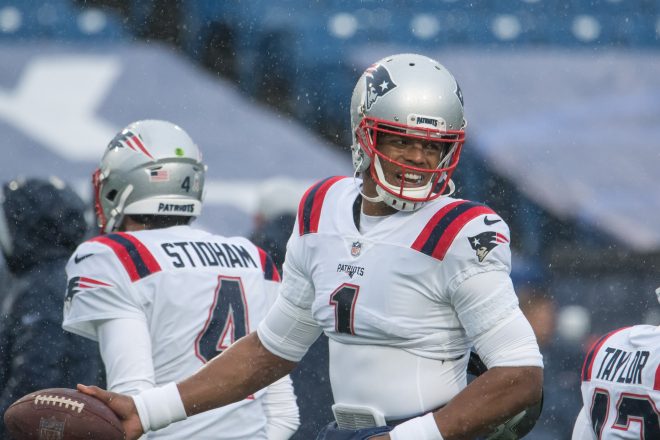 Today, June 6, is the anniversary of D-Day and the sacrifices of the troops on that day will never be forgotten. This afternoon may be time to pop a few DVDs in and rewatch “The Longest Day” followed by “Saving Private Ryan.” But we digress, it is on to football today.

The Patriots’ last four OTA sessions are currently scheduled to take place on June 7 and 8 and then on June 10 and 11. That will be the end of voluntary OTAs.

The Patriots will then hold its three-day mandatory minicamp between June 15 and June 17. That will be the first time that the entire team is slated to be together on the field.

Marvin Hall: For those hoping to hear news of Julio Jones, this may not be a great sign that Jones is coming to New England with the signing of former Lions WR Hall.  Hall is a very fast is undersized WR (5’10, 192) who played for Matt Patricia in Detroit.

He was present for OTAs on Friday and has caught 37 passes for 772 yards and five TDs in 45 career NFL games.

Nelson Agholor: The Patriots new WR has been an active participant in OTAs trying to learn the offense, and get some chemistry with the QBs, none of whom have played with him before. Agholor who had a very solid year last year with Vegas, is saying all the right things about being here and starting fresh in New England.

“This is where you grow as a player,” said Agholor. “I definitely want to take another leap this year. You have to be here, you have to learn, you have to be coached up about how you do things, learn the scheme, and just work on the fundamentals.

“It’s a great opportunity,” he said. “I’m new here, so it’s about learning the plays and different routes, learning the adjustments, and working on timing.”

Bill Belichick: The Patriots coach was showing some love for the Bruins and was wearing a B’s hat during his press conference on Friday.  “Big congratulations to the Bruins. Heck of a game,” Belichick said at Friday’s press conference. “We’re behind them. Go B’s.”

Mac Jones: Belichick gave his standard response when asked by the media members about his rookie QB with, “he has a long way to go,” Belichick was sounding pretty positive in his comments.

Christian Barmore: Another rookie getting some praise already this spring is the Patriots new DL out of Alabama. NESN’s Doug Kyed asked DL coach DeMarcus Covington about working with Barmore and his progress thus far in the NFL.

Covington said working with the rookie thus far has been “awesome.”

“He’s done a good job keeping his head down, trying to learn, trying to absorb all of the information.”

Salary Cap Questions? Ask Miguel: There is no one with more knowledge when it comes to NE’s salary cap than our old buddy Miguel Benzan aka @Patscap. If you’re going anywhere else for salary cap information, you’re doing yourself a disservice. Miguel joined me, Thomas Murphy, and Clare Cooper this week on a podcast, which was a lot of fun.

4th & 2 Podcast – If you haven’t checked out our PatsFans.com podcast, “Patriots 4th & 2” in a bit, you should check it out. The three of us finally got back in the studio this week and discussed OTAs and some of the latest news.

The Patriots had their sixth OTA session that was attended by media members and about halfway through the session, the QBs were working on a drill where they have to work on avoiding the pass rush. Assistants throw soft bags at the QBs, one of which may have hit or jammed Newton’s fingers…it isn’t known. Some speculated that it wasn’t a bag at all but that Newton may have hit his throwing hand on the helmet of one of the linemen.

While he didn’t practice any longer, he remained on the field, and spoke with Offensive Coordinator Josh McDaniels and was reportedly seen flexing his hand on the sideline. Mike Reiss of ESPN said that a source told him that the injury wasn’t serious and that Newton is “all good.”

On Thursday, Reiss reported that McDaniels was very positive on how well Newton had a grasp of the offense in his second season as a result of being able to take part in his first full offseason with the Patriots.

NFL Network Insider Ian Rapoport reported that Newton suffered a slight bone bruise on his throwing hand and repeating that it wasn’t thought to be serious. However, he did say that it could limit the incumbent starter’s reps until training camp. A day after McDaniels raved about Newton taking advantage of the offseason workouts that he missed last year, this may set him back.

While Rapoport didn’t specifically say Newton hurt his hand on another player’s helmet, he mentioned the damage a QB can do to his throwing hand by hitting another’s helmet while following through. It will bear watching.

First-round draft pick Mac Jones doesn’t seem to be 100 percent healthy either. He was wearing a compression sleeve on his left calf and it was mentioned that at times it appeared that it was clearly affecting him.

“Well, I think it’s a great perspective, even though the sport’s different, dealing with athletes, dealing with teams, dealing with similar situations, even though the sports different, there’s a lot of common ground there. So, I think a lot of times those conversations are great and they’re very insightful and honestly, in a lot of ways, they’re easier to have. For me to call up another coach in the National Football League and talk about my problems, I mean, that’s not really something that I would do or that anybody else would do. Another coach in the NFL will do that, I mean, I just have a hard time seeing that happening.

“But, when you’re talking about different sports and you’re not trying to gain an edge on anybody – Major League Baseball or the NBA or the NHL or Coach [Dave] Pietramala at Hopkins, or Coach Ken [Niumatalolo] at Navy, or somebody like that, that’s just completely out of your circle of competition, – it’s a lot easier to have sometimes those kind of frank conversations about your team or about whatever the situation is, whatever you’re talking about, than with somebody who’s in your sport, that’s competing in your league in a similar situation.

“So yeah, I think those have been very insightful to me and some of the friendships that I’ve made with those people in other sports have been very helpful and they’ve given me a lot of insight and I’ve taken a lot from their knowledge, experience, leadership. There’s quite a few people, I wouldn’t be able to name all here, but there have been quite a few of them>”

Bill Belichick’s when asked about what he gains in his interactions with coaches in other sports and what is he looking for and what has he taken from those conversations?