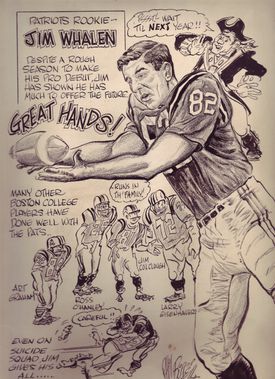 Jim Whalen was a local guy, a graduate of Cambridge Latin and Boston College. At the time he was the number one pass receiver in BC history with 73 receptions. Jim was an excellent all-around athlete, lettering in both hockey and baseball as well as football for the Eagles. 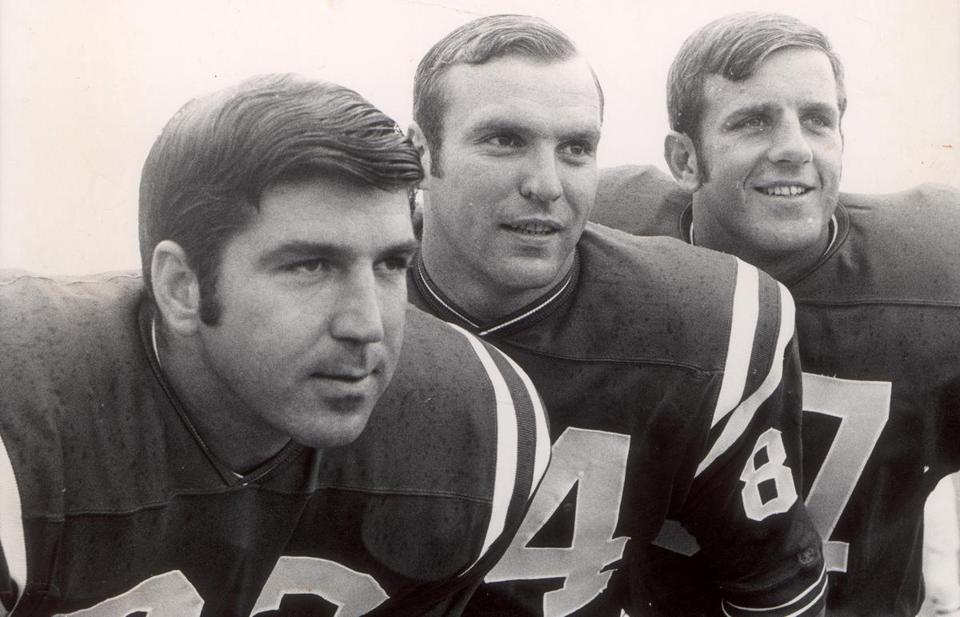 During his five years with the Pats he led the team in receptions (153) and receiving yards (2,487). In 1968 Whalen was the team's MVP, a consensus all-league selection and led the Patriots in receptions (47), receiving yards (718) and touchdowns (7). That marked the first time a Patriot was a first team All-Pro, sharing the position with Baltimore legend John Mackey. Jim Whalen is a deserving member of the Patriots All-Decade Team for the 1960s, and as a bit of trivia he is the only person to catch three touchdowns in a game at Alumni Stadium at both the college level and pro level. 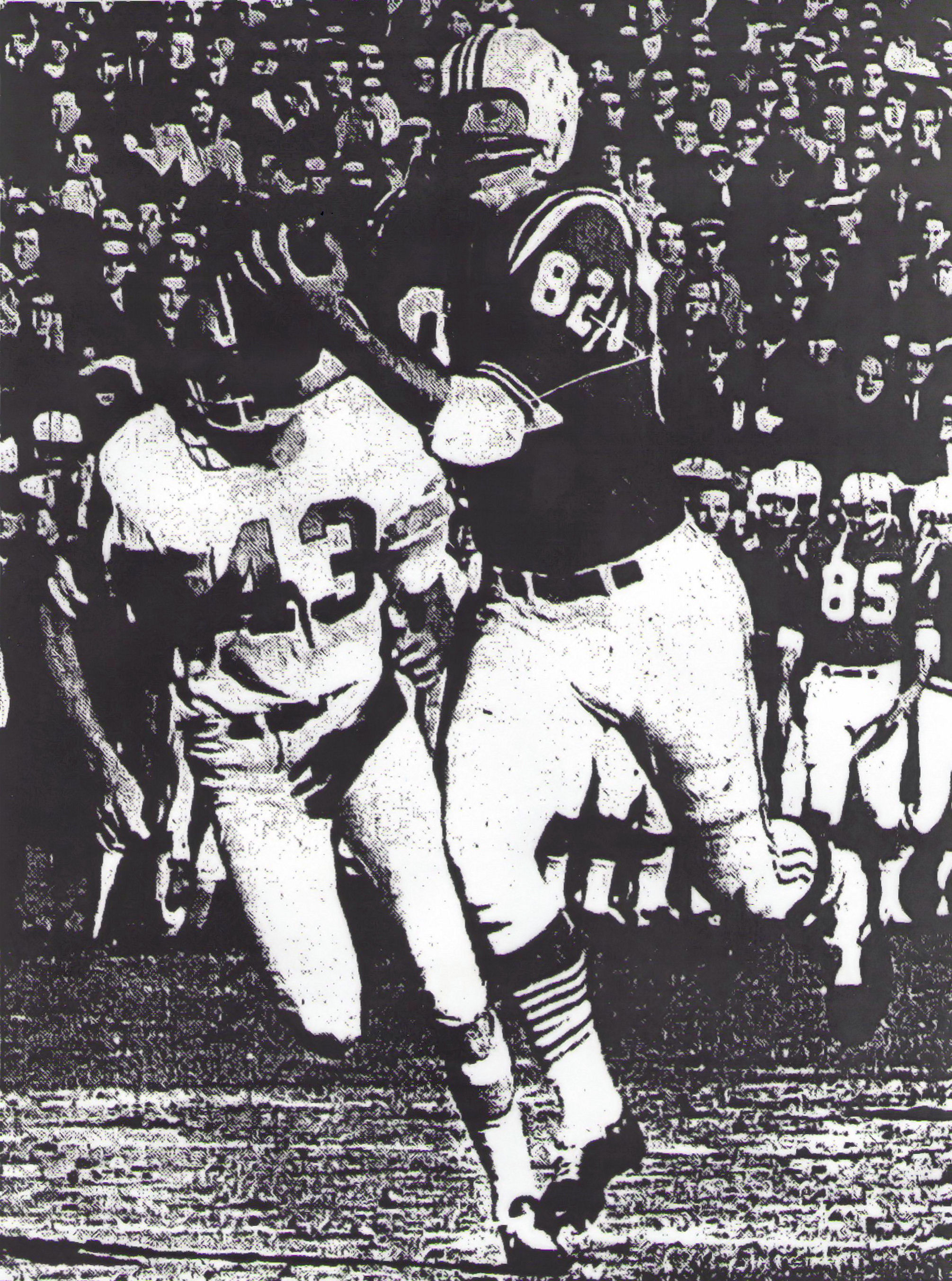 
Despite playing his entire career during the shorter 14-game season and largely for teams that ranked at or near the bottom in passing, Whalen's accomplishments still compare favorably in today's offense-oriented game. He is one of only four Patriot tight ends (Russ Francis, Ben Coates and Rob Gronkowski) to string together three consecutive seasons of 500+ yards receiving (he had another with the Denver Broncos), and one of only three (Coates, Gronkowski) to record 650+ yards in back-to-back seasons. Additionally, Whalen's Patriot career yards per reception average of 16.3 ranks first among all Patriot tight ends and sixth all-time among all Patriot receivers, wide outs included (minimum of 150 career receptions).​
His career average of 16.0 per catch (inclusive of his time with the Denver Broncos and Philadelphia Eagles) as a tight end is outstanding and ranks in the top ten in the history of professional football (minimum of 150 receptions). Five of Whalen's 20 career touchdowns were for 40 or more yards. Whalen still also holds the Patriots tight end records for longest reception (87 yards), longest touchdown reception (87 yards) and most touchdown receptions in a single game (3, tied with Gronk).​
Furthermore, Whalen protected the ball exceptionally well, fumbling just twice in his career. Through the end of the 2010 season, only one tight end in history (Andrew Glover) had fewer career fumbles than Whalen while catching as many passes.​
Had a career game high of 134 yards receiving (against the Miami Dolphins in 1967), and is one of only five Patriot tight ends (Coates, Hasselbeck, Gronkowski and Hernandez) to record at least four career 100 yard receiving games.​
Whalen's accomplishments also compare favorably to those of his peers during his time in professional football. The All AFL Hall-Of-Fame, First Team All-1960's Team tight end is Fred Arbanas. Catching passes from Hall-Of-Fame quarterback Len Dawson, Arbanas caught 198 balls for 3,101 yards, a career 15.7 yards per catch average, 34 touchdowns while fumbling 4 times in 118 games. Whalen's career line is 197 catches for 3,155 yards, a career 16.0 yards per catch average, 20 touchdowns while fumbling twice in 89 games. By comparison, during his career Whalen caught touchdown passes from Babe Parilli, Don Trull, Mike Taliaferro, Tom Sherman and Pete Liske. He also lined up with Steve Tensi, Alan Pastrana, Steve Ramsey and Don Horn in the quarterback position.​ 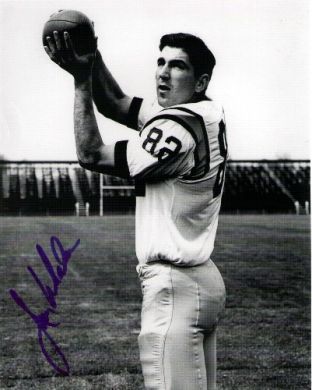 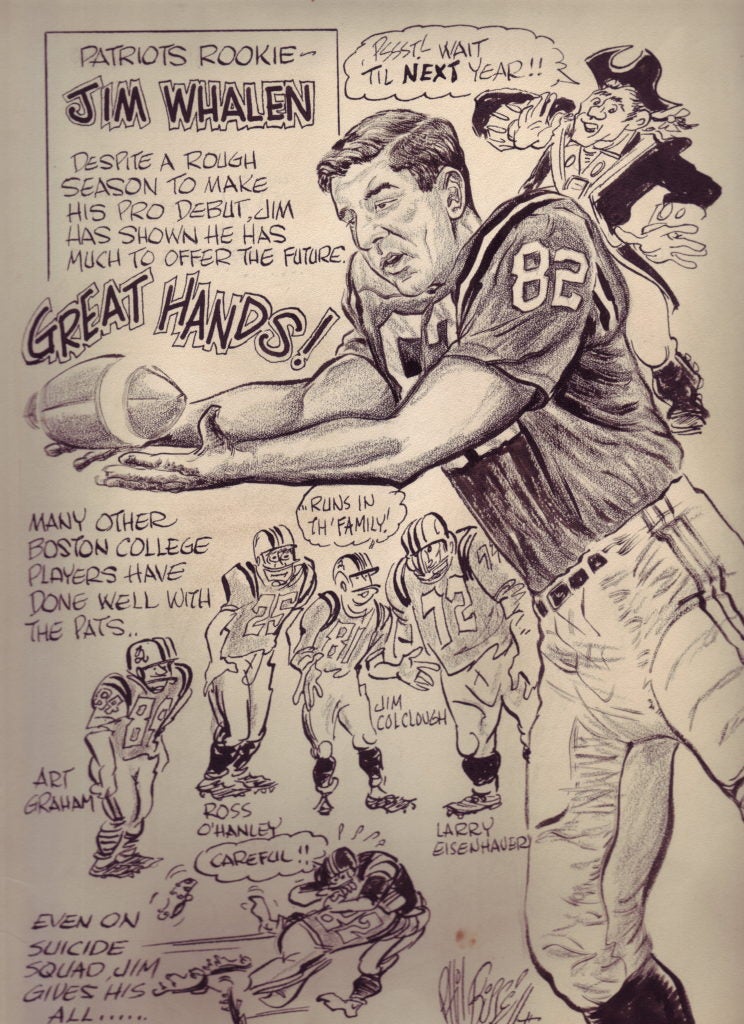 Jim Whalen never caught a pass while playing high school football, but once he was moved to tight end the first day of practice at Boston College in 1961, his career took off. A two-time All-East selection, Mr. Whalen was chosen for the 1965 Senior Bowl and East-West Shrine Game, and played...
www.boston.com


When Jim Whalen was a three-sport athlete at what was then Cambridge High and Latin School, he liked to talk with John “Snooks” Kelley, a social studies teacher who also was Boston College’s hockey coach. He visited the campus with Kelley and was awarded a partial athletic scholarship.​
Mr. Whalen never caught a pass while playing high school football, but once he was moved to tight end the first day of practice at BC in 1961, his college career took off.​
A two-time All-East selection, Mr. Whalen was chosen for the 1965 Senior Bowl and the East-West Shrine Game, and he went on to play professionally for seven seasons, the first five with the Boston Patriots.​ 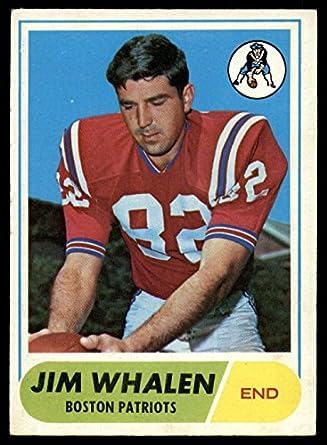 John Huarte won the Heisman Trophy in 1964 while at Notre Dame. He was a 2nd round pick by the Jets in '65 and a career journeyman in the pros. In two seasons backing up Babe Parilli, Huarte completed 8 out of 20 passes with no TDs and two picks. 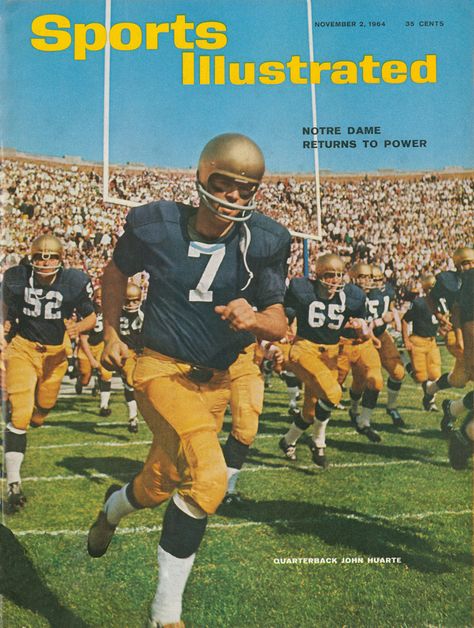 Byron Cowart saw limited action as a rookie (43 total snaps in five games). In 2020 he started 14 games, logging 419 defensive snaps (41%) for the Patriots. Cowart will likely be in battle with second round pick Christian Barmore this summer for the starting spot at defensive tackle. 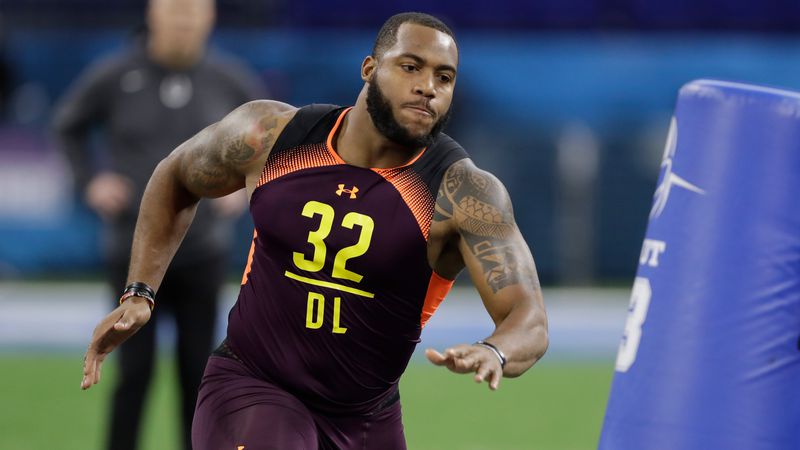 After washing out at Auburn, the former five-star recruit has evolved into an NFL draft prospect. 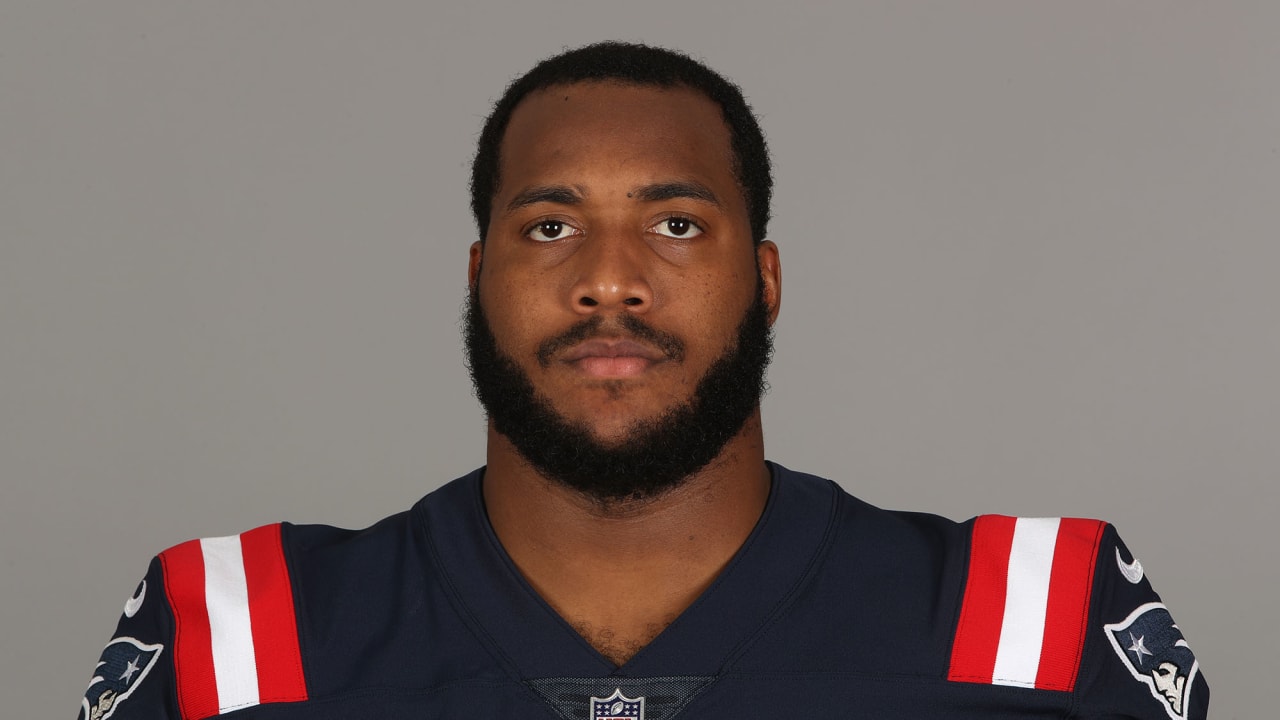 Byron Cowart was selected by the New England Patriots in the fifth round (159th overall) of the 2019 NFL Draft. 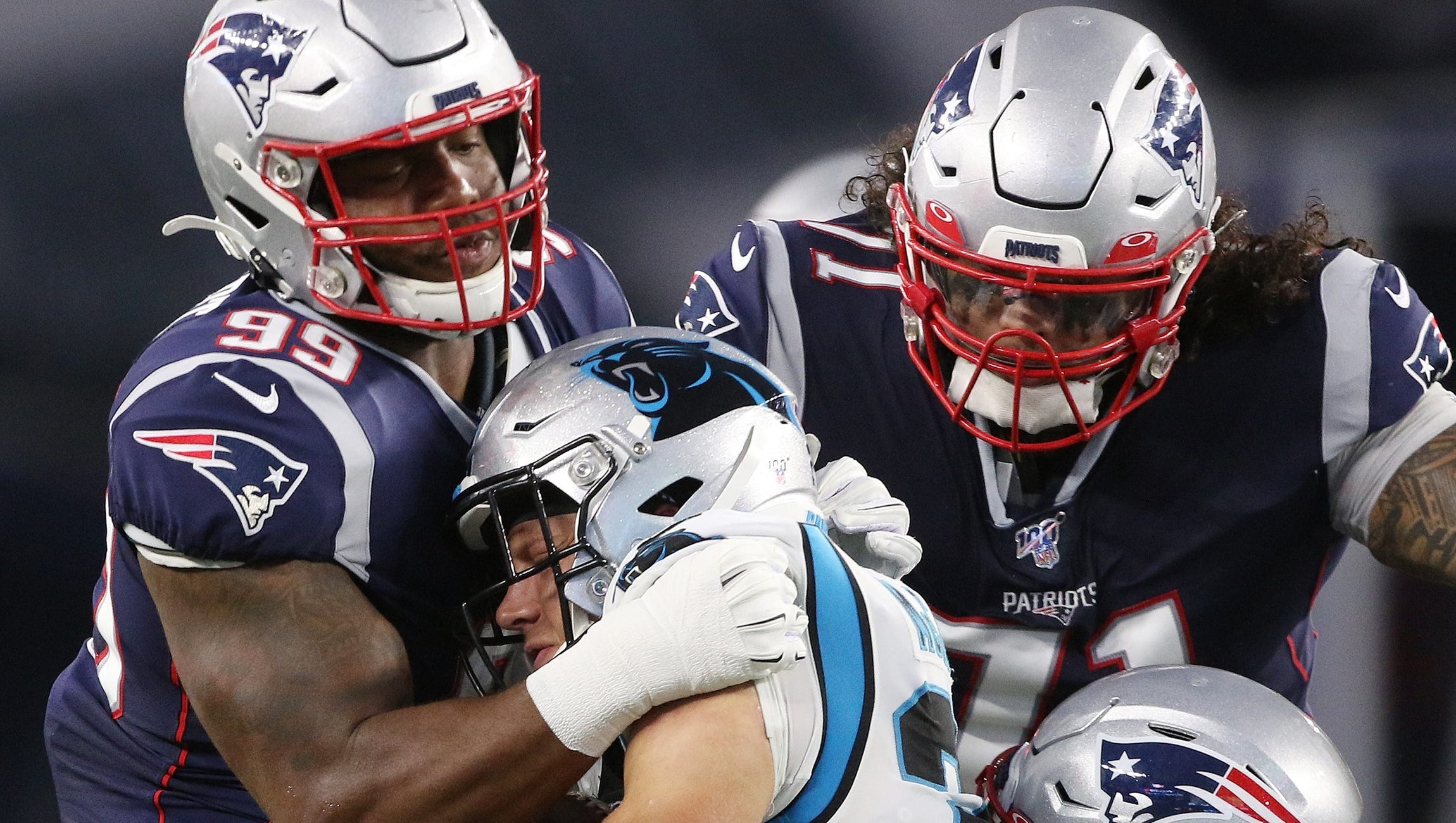 Byron Cowart entered college as the No. 1 recruit in the nation, according to ESPN and Rivals.com. When he didn’t meet those expectations, the fans and media that once loved him turned on him.
www.providencejournal.com
C

The Jim Whalen bios = Winner...Love reading about the local dudes, especially from the team's first decade-1/2...

The other two names, unfortunately...ugh...
You must log in or register to reply here.