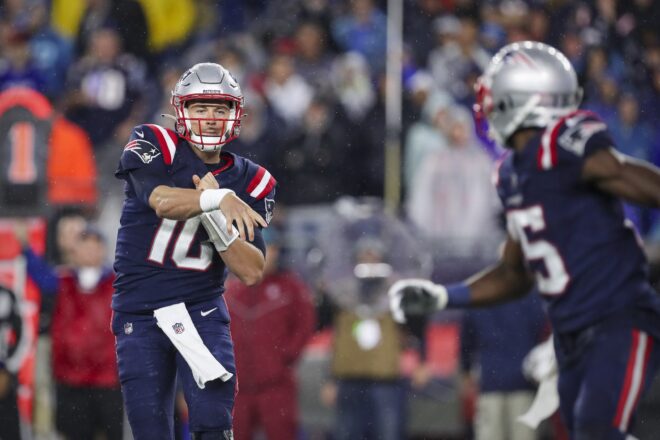 – Julian Edelman‘s recent appearance on I Am Athlete has obviously been mentioned here for the last few days, but the receiver touched on something else during the appearance that was also interesting.  Edelman talked about how important it is for New England Patriots players to really get fully involved with the people around them, from top to bottom.  He admitted that it’s a point of emphasis with head coach Bill Belichick that was felt almost immediately.  “First day,” said Edelman when asked if there was a moment he recalls about the team’s culture difference.  “First day, you walk into the auditorium, you know, we have auditoriums, and it’s rookie minicamp and there’s a sign on the wall when you enter that says, ‘Put the Team First, Be Attentative, Do Your Job, Work Hard’.”

“So you walk in and there’s all these pictures of these moments throughout the year before of big-time plays of players and you go in the auditorium and there’s all these pictures of like linemen and them doing their jobs and all this s**t.   And our first meeting there, he looks at us and he calls on you and he goes, ‘Who’s that guy?  Who’s number 72?‘  And I didn’t know.  I mean, I didn’t even know where New England was before I got drafted.  I was like, ‘where the f**k am I going?’  ‘I don’t know coach.’  He goes, ‘Well, when this guy’s sitting there, he’s won three f**n Super Bowls, he’s making $8 million a year and you don’t know his f**n name, like, learn your f****n team.‘  After that, everyone’s scrambling, looking for everyone … He was asking, like, meal lady’s names and s**t like, ‘Who’s the lady in the meal room?‘ You know?  Just to make you put the precedent like, ‘this is how it’s going to be.  Know your people, do your job, and that was from Day 1.  It was crazy.  On eggshells, all the time.  You’re on ice, your shoulders are back, your head’s pinned, your ears … you’re just attentive when he’s around.”

– The Patriots scouting department is always digging for future contributors and one report has them already keeping an eye on small-school running back.  According to SI’s Ethan Hurwitz, the club has expressed interest in Missouri Valley College running back, Jaleen Jones.  Jones is 5’11, 220-pounds who runs with power and said in a recent interview that he’s someone who gives is all day-in and day-out.  “I’m a hard worker who will always give it my all, every day,” said Jones.  “When I set my mind to being the best at something, I go above and beyond to ensure my success.”  The Chicago Bears, Kansas City Chiefs and Indianapolis Colts were among additional NFL teams reported to have shown interest in Jones.

– Receiver N’Keal Harry remains a player that the Patriots need to find some sort of closure with, given that they’ve got an incredibly deep group with no real room left for the former first-round pick.  Harry has exhausted his options, especially in 2021 where he lined up in the wrong spot and had to be corrected by a first-year quarterback, as well as being one of the last guys off the line among his peers.  The belief seems to be that if the Patriots could have traded him, it would have happened by now but Boston Sports Journal writer Greg Bedard believes there’s still a chance Harry gets moved during camp.  Bedard said during a recent Q & A that things change once camp begins, so an opportunity could come for him to finally be moved.  “I would say it’s possible right before camp,” said Bedard.  “Some personnel exec might think we could use a little bit more at WR. Other than that, yes, you’ll have to wait for injury. Or the Patriots might just cutbait before camp and move on.”

– In terms of what move will help the Patriots best financially, Bedard cited the link at Over-the-Cap that shows the benefits of each scenario.  According to that site, cutting Harry will save the team $1.198 million, while trading him would potentially save them $1.872 million.  As a result, that’s likely why Harry remains on the roster and the team continues to be patient, since the benefit of not only getting something in return is coupled by the additional cap savings if they can, in fact, ultimately move him.

– Meanwhile, while this might be a time for vacation for some, Mac Jones continues working behind the scenes getting ready for the season.  NESN reporter Zach Cox picked up on an Instagram post from Nelson Agholor that showed the veteran receiver working with Jones along with Tre Nixon at a throwing session in California.  Nixon looked impressive in the clip, with the receiver showing his speed and quickness as he hauled in a deep ball from his quarterback.  This is obviously also key year for Agholor, who caught just 37 receptions for 473-yards and 3 touchdowns in 2021.

– Former Patriots receiver Braxton Berrios, who was drafted by the team in the sixth round in 2018, has no regrets about the way things have gone for him.  After having a tough time the following preseason and getting cut by the club in 2019, he’s established a role with the Jets and he’s happy with the way things have turned out.   “Really, I feel like I got a PhD in football (in New England),” said Berrios via WEEI. “It didn’t work out for whatever reasons, and looking back it’s the best thing that ever happened to me. It felt like the back was against the wall there.  “I kept going, obviously, and found ways to be productive, and obviously in the return game was the first way. And then I really, really wanted to make sure I was seen as a receiver as well, and really over the last two years I’ve gotten a lot more of those opportunities. Then you marry those opportunities with now being named the first-team All-Pro last year as a kick returner, it’s finally full circle, it’s maybe starting to work out a little bit.”  Things have definitely gone his way and he was rewarded this offseason. Berrios ended up with a decent payday, signing a 2-year, $12 million contract to remain in New York.

– Things continue to be argued behind the scenes on the future of Deshaun Watson, who awaits to learn of whatever disciplinary action will be handed down by the league.  The NFL is reportedly insisting on an indefinite suspension, with Watson’s side arguing that there’s no basis for punishment that significant.  However, the hearing is scheduled to continue on Thursday with Judge Sue Robinson reportedly with the responsibility of making the determination of whether or not the embattled QB violated the league’s personal conduct policy.   Multiple analysts believe that the league has argued for an indefinite suspension and would potentially accept Watson serving 6-8 games, but this one clearly still has a ways to go before it’s sorted out.

– After spending 10 seasons in Seattle, linebacker J.J. Wright ended up playing in Las Vegas with the Raiders after hitting free agency last offseason.  However, the former Seattle fourth-round selection saw his family stay behind, which was apparently very difficult for him.  As a result, Wright is again a free agent and said that if his old team doesn’t need him, he’ll walk away because his family is more important to him.  “They know where I stand,” said Wright of the Seahawks.  “But I love my family more than I love football. So I’m not willing to just up and go to a team mid-season for five months. I got three kids and I love them way more than just up and leaving them to play some ball. … So we’ll see. Seattle knows my heart. It only makes sense for me to go back. And so we’ll see what they end up doing.”