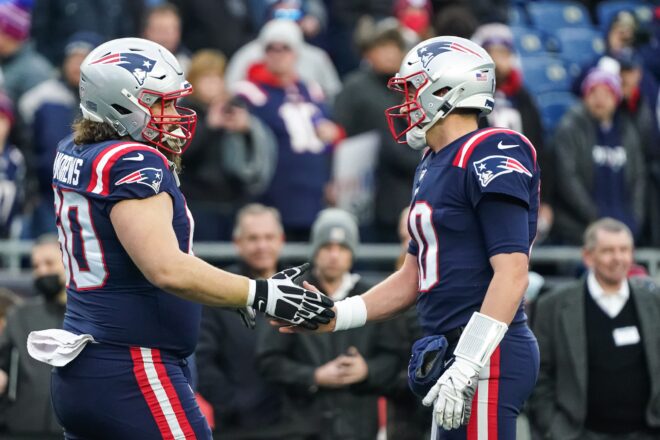 Some thoughts coming off the Patriots’ frustrating loss to the Bills on Sunday:

1) Patriots rookie quarterback Mac Jones had a rough afternoon on Sunday, finishing a paltry 14-of-32 for 145-yards and two interceptions, albeit his final one came on a Hail Mary at the end of the game.

The Bills put pressure on Jones for most of the contest on Sunday, causing the rookie to have to move around quite a bit and he never had much of an opportunity to get into a rhythm.

He’s been beaten up on quite a bit recently, and he caught a massive break again on Sunday after he was brought down on the sideline after being pulled straight down from just below his neck.

The play was one of the more controversial ones, as it occurred on a play where Jones was forced out of the pocket and took off with the football.  Bills defender, Jerry Hughes, caught up with the quarterback as he went toward the sideline, pulling Jones down from behind after he was well out of bounds in what was about as close to a horse-collar tackle as you can get.  Jones’ foot got caught underneath him and he came straight down and had it not been for the knee brace he was wearing, the play could have potentially been disastrous.

The officials initially threw a flag on the play but, picked it up.

That drew the ire of head coach Bill Belichick who was absolutely furious and resulted in some expletives toward the officials.  However, they said after the game that they didn’t believe what happened reached “a level of a personal foul.”

“What we ruled was, we had contact on the sideline,” referee Shawn Smith told Mike Reiss after the contest via the pool report. “And after discussion, we determined that it was incidental contact that didn’t rise to a level of a personal foul. There was no second act by the defender in that situation, so we determined there was no foul, based on that action.”

Regardless of intent, the play was what it was and they’re just extremely fortunate Jones survived to play another down.

Meanwhile, Jones also didn’t get a lot of help from his receivers, with several throws ending up in the hands of players in crucial situations but they resulted in drops.  That’s been a frustrating theme as of late and when you have a rookie quarterback who is fighting to make plays, that only exacerbates the problem.

2) Getting back to Jones and the offense, another thing that continues to stand out is the fact against upper-echelon teams, the Patriots just don’t have quite enough playmakers on offense at this point.

The addition of Hunter Henry and Jonnu Smith are the two that stand out and are probably the most disappointing.  Each have been terrific blocking this season and deserve a lot of the credit for the success of Damien Harris and Rhamondre Stevenson in the running game.  However, in the passing game, it’s been a different story.

Henry has been the more productive of the two, with the former Chargers’ tight end coming into the game with over 40 receptions and a team-high 9 touchdowns.  He and Jones didn’t quite seem to be on the same page Sunday, with the quarterback finishing the afternoon just 1-of-6 targeting him for 9-yards.

They’ve been an upgrade from what the Patriots had in recent years, but it’s surprising that the production hasn’t been a little better.  Considering the fact Henry and Jones are neighbors, and because of that, he’s admitted they spend a lot of time together off the field, the chemistry should be getting better, not worse.  With only a couple of weeks left to go in the regular season, it would be nice to see some improvement in this area from both players.

3) N’Keal Harry continues to be arguably one of the most frustrating players on the roster.  There’s no question Harry has proven to be a valuable player in terms of his impact on the ground game, as he’s been one of the best blocking receivers out there and has quietly contributed to their success running the football.  However, he continues to look like a player who is still unsure of what he’s doing, and his play reflects that.

One thing that was noticeable on Sunday was the fact he’s a full half-second behind everyone else out there, which certainly isn’t helping things.  He’s typically one of the last players to move after the snap, which is usually a sign of someone who is lacking confidence and isn’t 100% sure of what’s going on.

Here are three photos of several plays that happened on the same series.  In each one, you can see Harry is the last to move (and hasn’t moved), with everyone else already off the ball and into whatever their particular job is calling for. 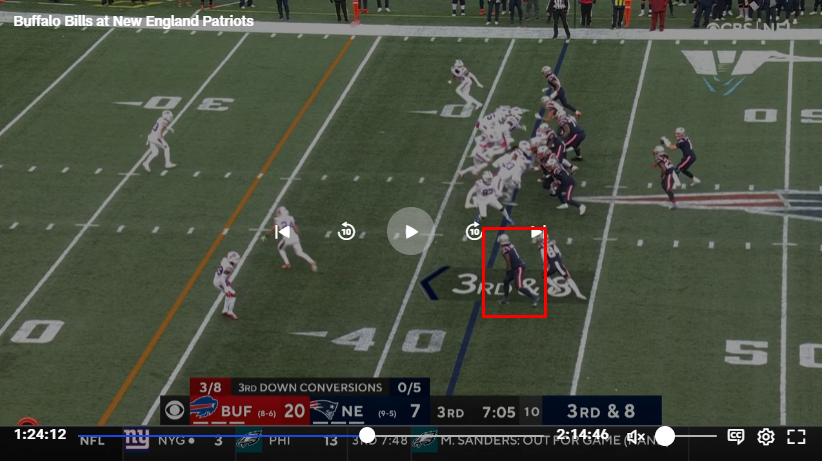 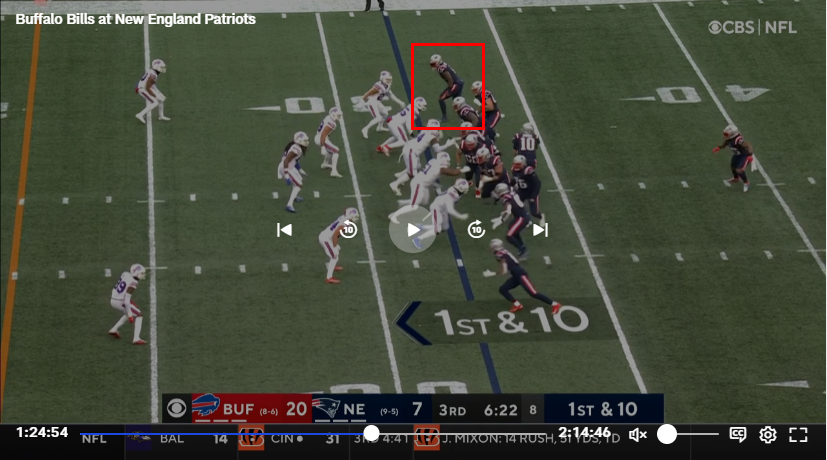 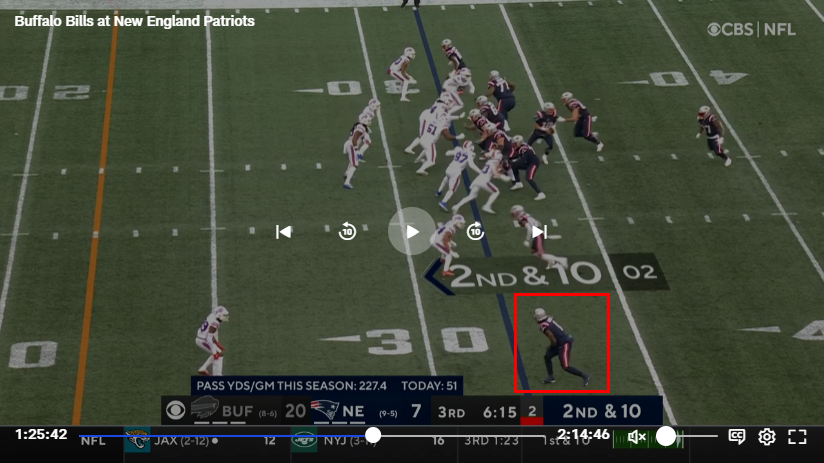 It’s just bizarre.  He’s in his third season with the team and he still looks like someone who doesn’t know what he’s doing out there.  He played 61 snaps, his most of the season and caught just two receptions on 2 targets.  But this seems to be somewhat of a trend and it’s disappointing as he remains a player who still through three seasons hasn’t yet lived up to his potential.

4) Watching McKenzie torture Myles Bryant for most of the game was difficult to watch, but it’s another reminder how thin New England is in their secondary as we head into the final two games.

Joejuan Williams was inactive for this game and the injury to Jonathan Jones continues to be one that’s been a reminder of just how valuable he really was to this defense.  Williams has had an up and down year and wasn’t listed on the team’s injury report heading into the contest.

The Patriots were fortunate that they didn’t lose J.C. Jackson, who suffered an apparent arm injury at one point during this game but was able to return after going into the blue medical tent.  But their margin for error has been slim and the match-up between Bryant and McKenzie was a mismatch that hampered them the entire contest, as the Bills receiver had a monster game after hauling in 11 receptions on 12 targets for 125-yards along with a touchdown.

Truthfully, the killer in Sunday’s game was the fact they had a tough time getting to Josh Allen, who spent much of the afternoon making plays with his legs.  He racked up 64-yards on 12 carries, with his final run of the day being the dagger after he evaded a tackle on a 4th-and-1 at the Patriots’ 34yd line, picking up 8-yards for the first down to extend the series.  It led to a touchdown, which put the game out of reach.

For a team who has done such a great job getting to the quarterback, they didn’t sack Allen once.  Worse yet, they also couldn’t contain him and his ability to extend plays made things tough on the secondary, which Devin McCourty admitted after the game made things incredibly difficult.  That ended up being one of the key problems all afternoon and it was just too much for them to be able to overcome.

5) While injuries and COVID have played a role, one thing that continues to stand out is the fact not enough guys are stepping up and taking their play to another level.  What we’ve seen instead is that they’ve got some solid guys and a couple of very good players, but no one has been able to reach the level of “great” this season, at least not consistently.

Unlike previous seasons, we’re not seeing that arc from anyone at this point.  The biggest surprise, honestly, has been the emergence of Stevenson, who after a rocky start has ended up being the perfect compliment to Harris while giving New England a tough, physical rushing attack.  But no one has consistently emerged as a receiver to this point.  And that fact stings even moreso when you take into account the fact we’re heading into what has normally been the final weekend of the season.

Needless to say, that’s been one of the reasons why the last two weeks have played out the way they have.  For Jones to improve and take the next step, someone needs to step up and make a few plays if they hope to at least make some noise and surprise some people in January.  If not, this storybook season could end on a sour note, and it’s been sour enough the last two weeks as it is.

By: Mark Morse
Today I am going to give a wrap-up of the East-West Shrine game practices.  The Patriots coaching staff has been very hands-on.  Steve Belichick arrived…
24 hours ago