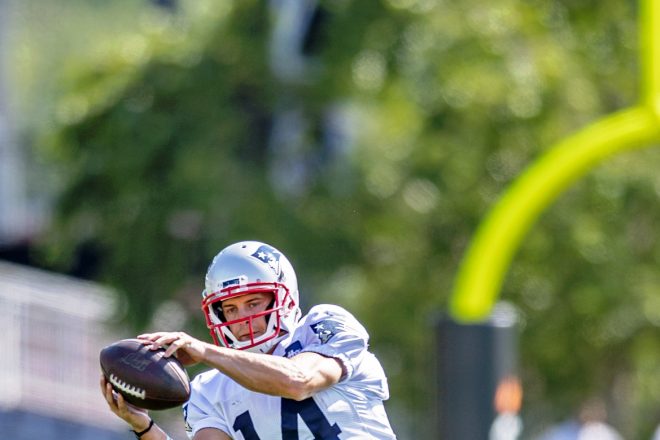 With one week of camp in the books, here’s a quick rundown of all the media reports for Patriots receiver Braxton Berrios, who has had an uneven first week during the team’s start of training camp.

“Berrios went all out for a quick out pass from Brady, diving for the ball, which got a fist-bump from the QB when they got back to the huddle.” – Steve Balestrieri, PatsFans.com – 7/25/19

“LaCosse (on a dangerous pass over the middle by Hoyer), Braxton Berrios (on a pass thrown behind him by Stidham) and Ryan Davis (in an individual drill) all had drops. ” – Phil Perry, NBC Sports Boston – 7/26/19

“He’s in his second season, has the slot all to himself with no Julian Edelman, and Berrios has barely been noticeable. Had a drop today too.” – Greg Bedard, Boston Sports Journal – 7/26/19

“Braxton Berrios ran his best route of training camp by shaking Jon Jones to get wide open downfield. Tom Brady found Berrios, who would have been free to run for a 60-yard touchdown.” – Henry McKenna, USA TODAY – 7/28/19

“While it was notable he finally caught a pass from Brady (two, actually), he still hasn’t impressed very much. He’s been wallpaper to this point. Even his highlight today — a juggling catch — was actually a ball he should have caught the first time. Still wants to body catch too many passes.” – Greg Bedard, Boston Sports Journal – 7/28/19

“Berrios was yelled at after a rep against air for running a route too shallow.” – Greg Bedard, Boston Sports Journal – 7/28/19

“It was a good day of work for Berrios, who often found himself out there with Brady, N’Keal Harry and Maurice Harris. ” – Phil Perry, NBC Sports Boston – 7/28/19

“Braxton Berrios didn’t have a great session either, he had a drop from Brady and another from Hoyer. ” – Steve Balestrieri, PatsFans.com – 7/31/19

“After a really solid spring, things haven’t worked out. He hasn’t stood out at all. And worse yet, he isn’t getting any separation from the corners and he’s been mainly going against the second-tier guys. ” – Steve Balestrieri, PatsFans.com – 7/31/19

“Jonathan Jones made a nice pass breakup against Braxton Berrios. Tight coverage all the way over the middle and got an arm in to disrupt the catch.” – Matt Dolloff, 98.5 The Sports Hub – 7/31/19

“Undrafted CB D’Angelo Ross made a pair of pass breakups against Berrios and Gunner Olszewski.” – Matt Dolloff, 98.5 The Sports Hub – 7/31/19

“Berrios struggled to get away from cornerback Jonathan Jones, who has been one of the standouts this summer. In hurry-up 11s, Brady failed to connect with Berrios on two consecutive reps.” – Kevin Duffy, Boston Herald – 7/31/19

“Similar to Dorsett, but in the short area of the field — Berrios just can’t readily get open and you can tell it’s starting to annoy Tom Brady. He’s probably texting Julian Edelman daily for updates.” – Greg Bedard, Boston Sports Journal – 8/02/19

“Braxton Berrios handled the return duties for the punters’ post-practice work and was inconsistent with a few ugly drops. Berrios has not had a great first week-plus of camp.” – Andy Hart, WEEI – 8/02/19

By: Robert Alvarez
The Patriots show off their customized cleats for the NFL's annual "My Cause, My Cleats" campaign over Instagram.
1 hour ago