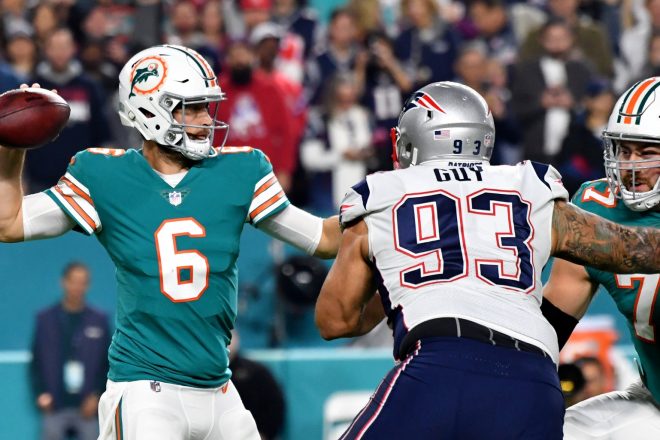 The Patriots’ defense, especially the run defense was a bad problem area in 2020. And the issue began with the way the defense is constructed.

For the run defense to be effective, the team must have a big man in the middle, a nose tackle that can two gap and hold his own at the point of attack. With Danny Shelton gone last year, the team signed Beau Allen to fill the role. But Allen never took the field for the team and it left them in a bad way with a group that was already thin.

The team was gashed for 2,103 yards rushing on the ground, 26th in the league. The pass rush was also the worst in the Belichick era but with teams routinely facing third and short situations, it was a losing proposition. Not any more.

So, the Patriots spent some cash on the defensive line and got bigger and much more physical up front. These moves will most certainly lead to an improved run defense in 2021.

The biggest of the moves arguably was the re-signing of Lawrence Guy, who has been a very consistent player in the front seven. Then the team signed NT/DL Davon Godchaux and Henry Anderson during the early stages of free agency, later adding Montravius Adams. Then in the draft, the team added probably the best interior defensive lineman this spring, Alabama’s Christian Barmore. 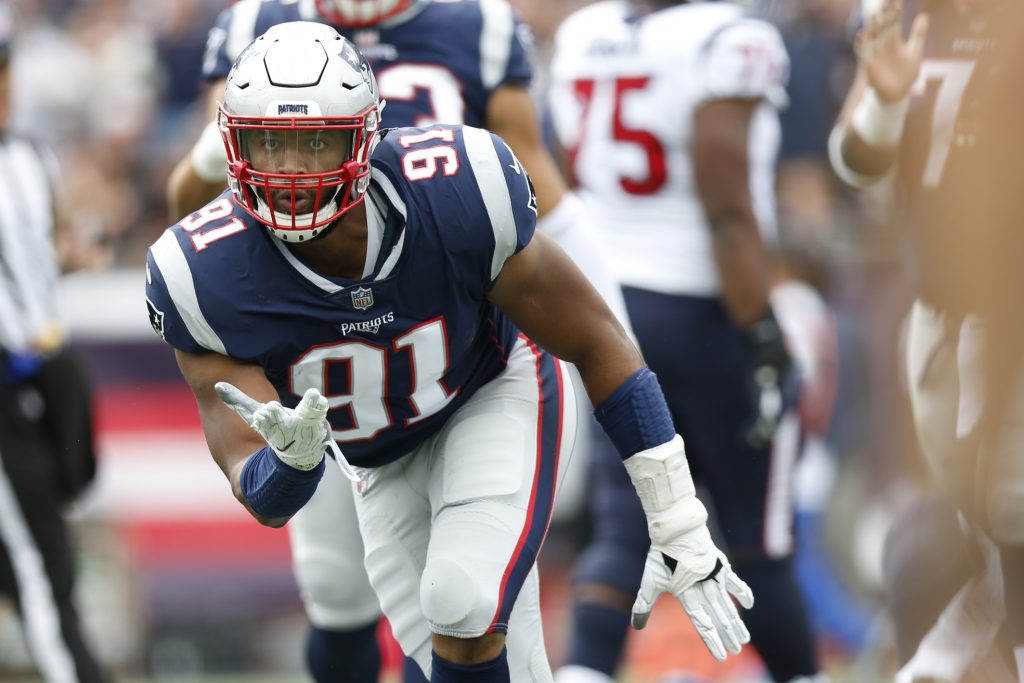 Discussion – When it comes to the upgrades at the defensive line, the Patriots added some experience with youth and it should lead to a much-improved unit in 2021.

Lawrence Guy has been an invaluable if a slightly under-the-radar member of the front seven. He does much of the dirty work in the trenches. But after the team immediately went after Godchaux and Anderson early in free agency, his return seemed like it wouldn’t happen after all.

But Bill Belichick recognizes what Guy brings to the table and paid him good money with a four-year, $11.5 million dollar deal, that may keep him a Patriot for the remainder of his career. Guy is a versatile, dependable, and valuable member of the defense who continues to be an integral member. Now he’s been given help and his level of play should increase.

Christian Barmore exploded onto the national scene in Alabama in 2020. He racked up eight sacks, four quarterback hits, 27 QB hurries, and four pass breakups on 324 pass-rush snaps. The Patriots got the best DT in the draft. He was a terror in the college football playoffs and initially, he’ll be slotted as a situational pass rusher, but his ceiling is sky-high.

Look for Barmore to be that 3rd down guy who replaces Godchaux in the center of the DL and with those “amoeba front” looks, he’ll generate some impressive pressure upfront.

Henry Anderson was a classic Bill Belichick signing. While it didn’t generate much of a media splash, he’s a guy who will pay immediate dividends with his versatility as both a run stuffer and a player who can push the pocket from the interior. He was signed to a two-year contract for $7,000,000 with a $2 million dollar signing bonus and $3 million guaranteed. He is a perfect fit for the Patriots defense and can play 3,4, and 5-technique.

Prior to free agency, on our 4th and 2 podcast, host Russ Goldman asked us who are three top free agents the Patriots should target. My #3 was Anderson, who will set the edge (a huge problem a year ago) and push the pocket. 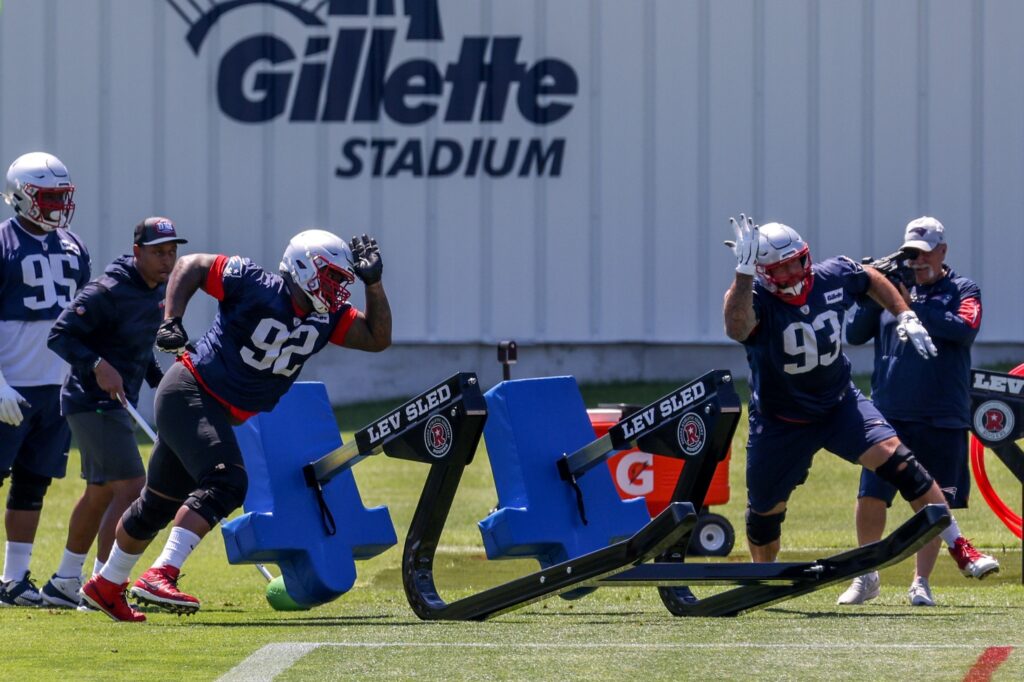 Davon Godchaux was paid nicely by the Patriots with a two-year deal worth up to $16 million, with $10 million guaranteed. If there is any question in your mind that he’ll fit as New England’s next nose tackle, there is none from Belichick.

Godchaux, like so many free-agent signings, is versatile and can play anywhere along the defensive line, but he was signed to play the nose and eat up the gaps, something that was missing badly a year ago. He said during his introductory press conference that he prefers playing the nose tackle position and looks at former Patriot great Vince Wilfork as a mentor…

Deatrich Wise was one of the guys I had possibly moving on after 2020 since he’s more of a fit for a 4-3 defense than the Patriots 3-4. Well, I couldn’t have been more wrrrrrroooong. Wise and the team agreed to a four-year deal worth up to $22 million with a $5 million dollar signing bonus, and $10 million guaranteed. Doesn’t appear that Wise is going anywhere…you think?

Wise is best used as a rotational pass rusher in the interior of the defensive line. But he, Guy, and Anderson should be able to routinely shuffle in and out to keep fresh legs on the field.

Byron Cowart made a big jump in Year 2, starting 14 games and playing in 41 percent of the defensive snaps, but could only register a single sack and three QB hits. The issue with him is, with the talent that they’ve added as well as the money spent, will be able to show enough to stick around?

Montravius Adams is a player who would look to back up Godchaux as the Patriots’ nose tackle or take over if Godchaux were to get injured during camp or preseason. The former 3rd round draft pick signed a one-year $2.5 million “prove it” deal this spring.  He’s had issues staying on the field, various injuries forced him onto IR last year.

But Patriots’ DL coach DeMarcus Covington raved about the former Packer’s work ethic and his fit in Foxboro. “This is a guy that, Day 1, stepped right in as if he was already a Patriot,” he said. “I give him all the credit for his hard work, for everything he’s been doing throughout the offseason… lifting, running, training, rehab, everything, all the above. He gets all the credit for that. As he continues to work and understand our defense, understand how we do things, understand fundamentals and technique, he’s going to be a good player.”

With the money spent and draft position, it is hard to envision that the roster not containing Guy, Godchaux, Anderson, Wise, and Barmore. Injuries frequently occur and the Patriots certainly aren’t immune to them, but with the group they’ve assembled, look for camp competition to be fierce among a suddenly much deeper group. All of a sudden, this unit is stacked…