The Patriots first practice session is in the books as training camp is underway. While everyone is trying to break down the exact number of snaps that Tom Brady and Jimmy Garoppolo got with the 1st team offense, that isn’t what I’d take away from the day. The Patriots defense seems like it may be prepping up to be a bit more aggressive this year.

With Jimmy G. taking the reins for Weeks 1-4 while Brady gets an early vacation to Costa Rica with Giselle, the pressure is going to be on the defense to step up. That will take a lot of the onus off of Garoppolo and still give the Patriots the chance to win. That’s why some of the lesser talked about developments concerning the defense today may provide an inkling as to how they’ll play.

It’s only one day and one practice but the team continues to tinker with Rob Ninkovich and Shea McClellin on the edge. The Patriots worked Ninkovich at linebacker a bit during the spring. That continued during Thursday’s practice session. McClellin who came over from the Bears this offseason spent most of the spring lining up as a defensive end. Today the Patriots had each doing more of the same and more. Both spent some time both rushing off the edge and dropping into coverage.

It is significant even though it’s early because it shows, at least initially that the team is going to take advantage of the players’ versatility. By showing different looks, formations and coverages, Bill Belichick and Matt Patricia can be more aggressive and keep opponents off-balance.

Newcomer Chris Long was mostly quiet on the first day of camp but what was noteworthy for him was that he was kicking inside, similar to what Jabaal Sheard did a bit last year. On obvious passing downs, adding Long as an interior sub-package pass rusher will help keep the pressure on the quarterback. 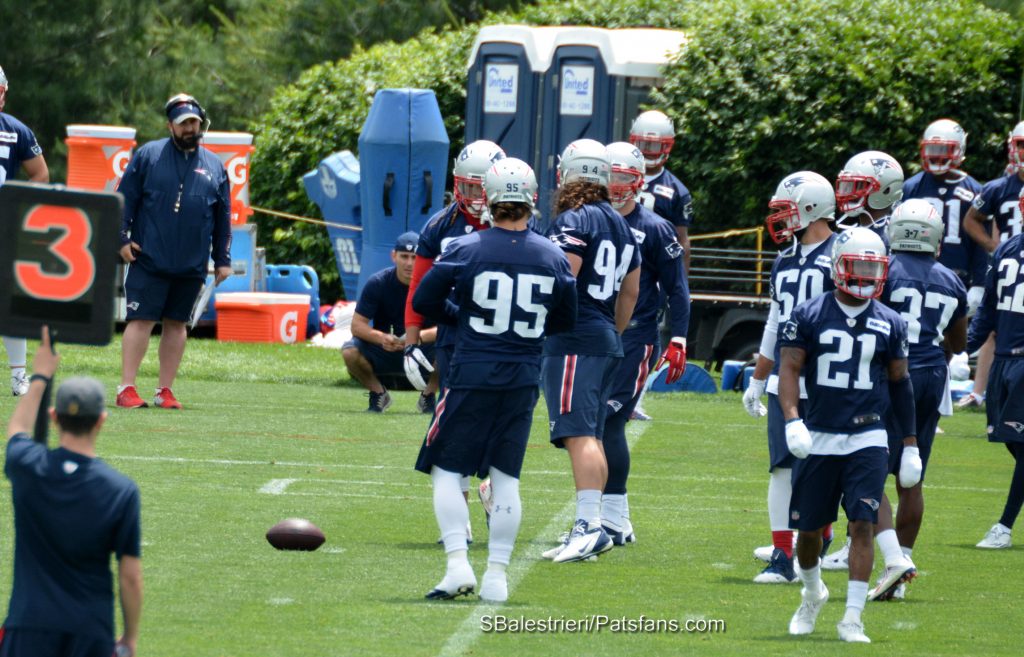 Ninkovich has been a jack-of-all-trades since arriving in Foxboro in 2009. He’s been a long-snapper, an outside linebacker and defensive end. Earlier this summer, Ninkovich hinted around that he’s comfortable doing anything asked of him by Belichick.

“What I can control is how I play on Sunday. So, really, that’s what everyone else is thinking: How can we perform better and whatever else comes out of it, we all might have to step up. That’s just the way it is.”

In an interview with Sirius Radio’s Pat Kirwan, Ninkovich talked about Belichick putting the team in the position to succeed. “I think Bill [Belichick] does a great job every year,” Ninkovich said. “He gives us everything we need to understand as far as going into a season, where we need to be mentally. And I think we all know that we have to go out there and perform at a high level, we have to put in the work now, put in the work in the offseason, put in the work in training camp. That’s where the games are won or lost.”

With an improved and deeper secondary in 2016, the Patriots may be more apt to be a tad more aggressive this season. No team blitzed a defensive back less than the Patriots a year ago. We may now be looking at a little bit of a change. It will definitely be something to monitor as the days go on in training camp.