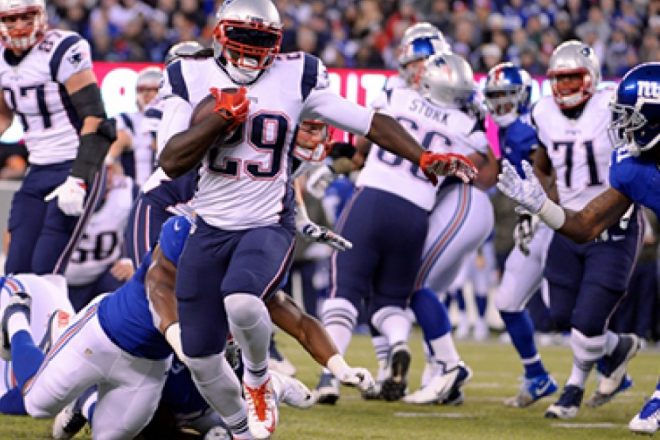 The Patriots head into training camp in just a few weeks and there should be no shortage of competition at a number of spots. As a lead-in to the beginning of camp, we’ll break down the positions and give our take on who is a lock, a near lock for the 53-man roster and who is on the bubble. We start the week off at the running back position.

Bill Belichick likes to say that the spring’s OTAs and Minicamp is a learning exercise and that the real competition begins in training camp. While that is true to an extent, with 89 players on the current roster,  a minimum of 36 of these will be cut. That doesn’t take into consideration the tweaking that goes on during the season after the initial 53-man roster is completed.

So we’ll start with the running backs. We know Bill Belichick likes a running back by committee, which tends to keep those fantasy numbers down but keeps their legs fresh. The team lost both starters to season-ending injuries a year ago as LaGarrette Blount and Dion Lewis ended up on IR. Although they return in 2016, it isn’t a given both will be ready for the start of camp.

Roster Locks: Dion Lewis
Lewis burst onto the scene a year ago and was absolutely electric once he got his hands on the ball. He proved to be tough to bring down in the open field and was fantastic as a pass receiver out of the backfield.

Among his many highlights arguably his best was a 10-yard touchdown against Dallas. Lewis caught the pass from QB Tom Brady one-handed and proceeded to shake and bake his way into the end zone making no less than three defenders miss.

Lewis was rewarded with a contract extension during the season but ended up tearing his ACL on a non-contact play against the Redskins. He had season-ending surgery and was definitely missed down the stretch and into the playoffs. He did make it onto the field for the last of the spring workouts and was running and cutting without a knee brace so there is room for optimism that he’ll be ready for the beginning of the year.

Near Roster Locks: LeGarrette Blount, Brandon Bolden, James Develin
While Blount isn’t highly thought of outside of Foxboro circles, he remains a favorite of Belichick. The big (6’0, 250lb) running back is a threat if he can get to the second level of the defense and had decent numbers a year ago.

Blount had 165 carries for 703 yards, for a 4.3-yard average with six touchdowns rushing. He also caught six passes for 43 yards and a touchdown. He’s never been much of a receiving threat out of the backfield but can catch the odd pass occasionally.

The biggest question for him now is his injured hip. Will he be ready to go once training camp begins? And will his hip allow him to return to the same level, movement wise for him to be effective?

Bolden is a proven core special teams’ player who can contribute on occasion both running and catching the ball out of the backfield. I don’t see him going anywhere in the short-term future. Develin was a guy who was missed in the running game last year, especially in short-yardage situations. He’s versatile, and can line up as a fullback, H-back or as a tight end.

As a lead blocker, Develin can really open up some holes for the backs to get to the second level. But his absence a year ago also hurt  in play-action passing situations. Teams didn’t respect the run enough to bite as much on play-action passes, something which should return this year.

On the Bubble: Donald Brown, James White, D.J. Foster
The Patriots could use a back that can backup Blount as the bigger back and carry the ball if he were to go down. Brown is a veteran that can not only carry the ball but catch it effectively out of the backfield and is an excellent back in pass protection. That is something the Patriots demand of their backs.

While he’s not prolific in any one area, having a guy with Brown’s experience and skill set give him a leg up on the competition. With Blount returning from a serious injury, look for Brown to get plenty of reps this summer.

White did a good job of replacing Lewis in the passing game out of the backfield last season. He caught 40 passes for 410 yards and four touchdowns in 2015. But his drawback is carrying the ball in the running game.

The Patriots didn’t have the confidence in White to allow him many carries last season. He logged only 22 carries for 56 yards, a paltry 2.5-yard average and two touchdowns in the running game. He too often doesn’t make people miss and goes down on first contact. He’s going to have to improve that aspect of his game this season. The team was too one-dimensional with him in there and opponents didn’t respect the run.

Foster is the wild card here. The undrafted free agent running back from Arizona State was so effective out of the backfield that the team moved him to slot receiver in his final college season. He is undersized but possesses the type of speed and quickness that Lewis has. He’s much taller however at just around 6’0 and has special teams’ versatility. His ability to return punts and kickoffs may be just enough to get him a roster spot. Foster is an intriguing case, keep your eyes on him this summer. Each year a UDFA seems to make the team, he’s a prime candidate.

Outside Looking in…. Longshots: Tyler Gaffney, Joey Iosefa
The Patriots thought enough of Gaffney after he was injured in 2014 to snatch him off the waiver wire from the Panthers. Gaffney was stashed on IR and brought back last year. But just a few days into training camp, Gaffney took a huge hit from Sealver Siliga during a drill and was lost for the season to another injury soon after.

Now entering his third NFL season, Gaffney has yet to take the field and although has the size and quickness needed as the backup “big back”, he’s a long shot. He’ll have to stay healthy and turn some heads during the summer.

Iosefa was brought in to bring some pop to the backfield and against Tennessee, he certainly did. While he only gained 51 yards on 14 carries, (3.6 avg), his day is remembered by one specific play. Iosefa ran over Cody Sensabaugh en route to a 15-yard gain. The 6’0, 245-pound fullback from Pago Pago, Samoa will have a tough time making the roster with Develin back in the fold, but even if he doesn’t, I think the team finds a way to keep him around.
Follow me on Twitter @SteveB7SFG or email me at [email protected]