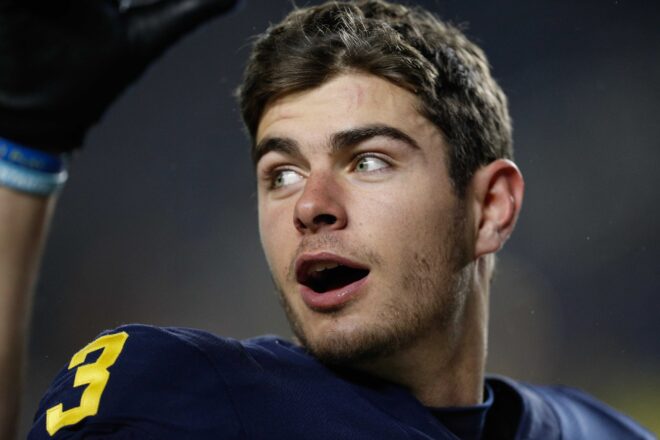 1) It’s been fun seeing newcomer Quinn Nordin take advantage of his opportunities with Nick Folk sidelined as it’s certainly set up a surprising position battle heading into the 2021 season.

But whether or not he’s on the roster to start the year seems to potentially be in question.  Quinn has been terrific from long range, including finishing a practice last week with kicks from 57 and 55 yards, which reportedly drew a smile and handshake from Bill Belichick to end the afternoon.

That was an area they lacked last season, which is likely why Folk only had three attempts from that distance.  Accuracy hasn’t been Folk’s issue, but long attempts have been an area where there had seemed to be some hesitancy.  He hit just 4-of-7 kicks from 40-49yds in 2019 and only had 1 attempt (which he made) from 50+.  Last season he was much better, but his injury this preseason has opened the door for Nordin, who seems to be taking advantage of it.

The former Michigan standout went 4-of-4 during Tuesday’s walkthrough, hitting on kicks from 33, 43, 46 and 48 yards.  That makes him 14-of-14 on attempts inside the stadium, which should he shine during the exhibition games, it could potentially see him earn the job heading into the 2021 season.

The fact we’re seeing what could be the start of another young kicker’s career is yet another great storyline this preseason.

His kicking coach, Brandon Kornblue, told 98.5’s Bob Socci last month that Nordin has never shied away from a challenge and, so far, he’s definitely making the most of his opportunity.

“He’s just gone through obstacles throughout his career, as many guys do, but he’s always fought them head-on,” said Kornblue.  “He doesn’t shy away from anything, any challenge, he’s mentally strong, he’s a competitor, he is so driven to be the best.”

2) ESPN’s Bart Scott made a little noise recently after targeting Cam Newton in what he believes to be a “body shaming” attack on his fellow rookie quarterback.

Scott claims that Newton’s nickname for Mac Jones, “Mac and Cheese”, is being disrespectful, taking offense to the moniker he’s placed on his teammate.

“That’s disrespectful, right? That brings up something totally different,” Scott said via FoxNews. “‘Mac and Cheese’ is like one of the most disrespectful nicknames that I’ve heard in a long time, and this dude thinks it’s a term of endearment. Like, I don’t know if somebody told him, he’s pretty much body shaming him.”

Considering Newton has never said anything negative about Jones, and the fact Jones even dressed up recently in a rookie skit to poke fun at him, the two appear to have a great relationship.  Jones’ body has never really been discussed, save for NBC Sports Boston’s Tom Curran, who made a harmless comment about the fact that Jones, at 6’2″, is a little shorter than a prototypical quarterback.

Aside from that, Jones’ physical appearance has never been discussed as being an issue and he certainly doesn’t appear overweight.  He even came into camp looking stronger than he did during minicamp, so Scott might be the only one who could have an issue.  That would at least make sense, especially since he decided to go down this road to begin with.

Either way, it’s a bizarre quote that definitely sounds a little ridiculous.

As for Newton, he’s been supportive and his recent quotes sort of sum up how things are between the two.

“I’m here for him, as well as he’s here for me,” said Newton. “So when Mac was picked there was no type of ill-will feelings, and there’s still no ill-will feelings because competition brings out the best in everybody.”

3) One cool story that happened recently was the news that former MLB standout Dylan Cozens decided to chase his dream of playing in the NFL, and apparently, the Patriots gave him an opportunity.

Cozins announced his intentions back in June of wanted to play football in a Tweet, which, according to Mike Reiss, Cozens believes the team saw and they invited him in for a workout.

I’ve decided it’s time to chase my dream of playing in the @NFL. I want to thank the @phillies @RaysBaseball and @Brewers organizations for giving me the opportunity to play professional baseball but more importantly the people, experiences, and memories I’ll keep forever.

“I really appreciate the opportunity the Patriots gave me,” Cozens told Reiss. “That’s all anyone could hope for — a chance. For them to take a chance, and even work me out, was pretty cool I thought.”

There was no word on how the workout went, but one issue could simply be his size, which he said is something he’ll need to work on.  While he didn’t land an opportunity, he apparently walked away with enough of a positive review that it seems like he’s not done pursuing his dream just yet.

4) After having been given a timeframe of 2-5 weeks coming off of a foot injury, it looks like the Colts could have Carson Wentz in the line-up for the season opener.

According to CBS Sports, Wentz is recovering well after undergoing a recent surgery, having been spotted without a walking boot and no noticeable limp.  Even head coach, Frank Reich, joked with the quarterback about taking some reps during a recent 7-on-7, which may indicate that Wentz is ahead in his recovery.

The veteran quarterback reportedly had surgery back on August 2nd and there was concern that Indianapolis might not have him available to begin the season.  That would have potentially left them with either Jacob Eason or Sam Ehlinger to begin the year, which wouldn’t have been ideal.

Philadelphia is likely rooting for Wentz to be out there to start the season.  The quarterback was acquired in a trade that included a conditional clause that would see the Colts have to give up a first-round pick should Wentz participate in 75% of the offensive snaps, or 70% and guide Indianapolis to the postseason.  The pick would only be a second-round selection if those two conditions aren’t met.

For now, Wentz appears to be trending in the right direction and Colts fans are likely crossing their fingers that it continues.

5) Anyone who believes Mitchell Trubisky isn’t a little bitter after leaving Chicago certainly got the answer to that on Tuesday.

The former Bears quarterback, who is now the back up in Buffalo behind Josh Allen, spoke to the media and admitted that after moving on from Chicago, he’s glad to have ended up in the situation that he’s currently in with the Bills.

While Trubisky had hoped to compete for a starting role somewhere, his goal for right now is to grow as a passer and he feels like this opportunity will allow him to achieve that.

“At first, I wanted to go to a spot where I would get to compete for a starting position, but the right situation didn’t come up and the opportunity wasn’t there,” Trubisky said Tuesday, via NFL.com. “I looked at the next best thing, where I could continue to develop and continue to progress and become a better player and a person and fell into this organization, and I loved it ever since coming to Buffalo.

“It’s just really nice to be a part of a great team and be somewhere where people want you here, and they care about how you’re progressing as a person, as a player. It was an interesting process, but I feel like I’m right where I’m supposed to be right now, and I’m enjoying being here.”

The Bears moved on from Trubisky this offseason with Andy Dalton while also drafting Justin Fields.  Oddly enough, Trubisky will actually have to back to Chicago in Week 2 of the preseason when the Bears take on the Bills out in the Windy City.

By: Robert Alvarez
Devin McCourty will appear in his 200th career NFL game on Thursday night against the Buffalo Bills, Robert Kraft honors his milestone.
50 mins ago