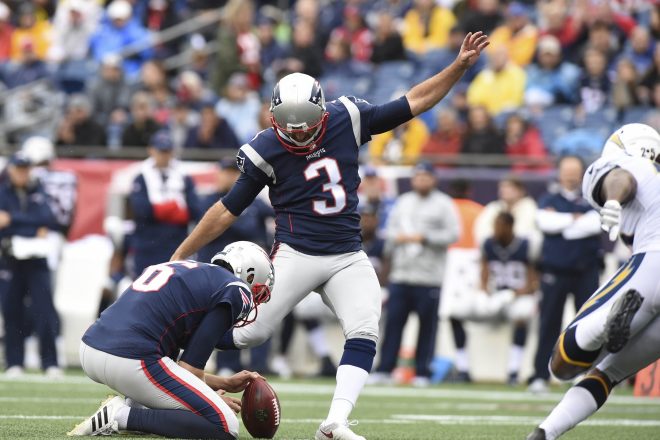 The wait is nearly over as the Patriots head into training camp tomorrow. NFL Football is back among us until February, and not a moment too soon.

The Patriots offseason has been mired in innuendo, speculation, with an almost soap opera-like aura that seems more like “keeping up with the Kardashians” than the Patriot Way. So now we can fill the airwaves of football talk again.

There should be no shortage of competition at a number of spots. But for our final position there shouldn’t be a lot of movement at the key spots.  We’re on to the Special Teams.

The team brought in no competition for their kicker and long snapper which speaks volumes in the confidence they have in both.

Gostkowski had a nice comeback season in 2017 in the kicking game. He was good on 92.5 percent of his field goals, hitting on 37 of 40 attempts including going 4 – 4 on attempts over 50 yards including career-long 62-yarder against the Raiders.

Gostkowski continues to be outstanding with his kickoffs. The Patriots were very good at pinning opponents back inside their 25-yard line or better during the season with the changes to the touchback rule. And Gostkowski had that developed into an art form, angling his kicks on one side of the field near the corner of the end zone. Opponents drives average start was their 24 yard line, the best in the NFL.

Cardona has been a solid accurate long-snapper since entering the league. A testament to his prowess is that you very, very rarely hear his name called in a game. Which means his snaps on field goals, extra points and punts are usually spot on. He’s done a terrific job of balancing his job with the Patriots and his duties as a Naval Officer which isn’t an easy task as well.

Facing no camp competition again this year, Gostkowski and Cardona need only worrying themselves to be ready to go for the season opener.

Allen is facing competition for the first time in his tenure since besting Zoltan Mesko in the 2013. And while his punting average has gone down each year for the past three years, he has actually become more effective at pinning opponents inside the 20-yard line.

Rewind to the 2nd half of the AFC Championship Game against the Jacksonville Jaguars. Allen pinned the Jags offense inside the 10-yard line three times in the second half, flipping field position for the Patriots and having a big role in the comeback victory to send the team on to the Super Bowl.

But he’s in the last year of his contract, and this is something we’ve seen before with the Patriots, Bill Belichick will change things up every few years with his punters. We’ve seen Ken Walter, Josh Miller, Chris Hanson and Mesko, who lost his job to Allen. He’s been here five years but faces serious competition for the first time.

Bojorquez is another left-footed punter from New Mexico. Last season for the Lobos, he punted 67 times with an average of 47.3 yards, so he has a tremendously strong leg. He had 12 of those turn into touchbacks, which will need to be remedied. But despite his average, 25 of his punts were fair caught by the opposition which speaks highly of the amount of hang time.

We were witnesses to that during June’s minicamp. Bojorquez was absolutely booming the ball with incredible hang time. One punt which went well over 50 yards, hung up so long, punt returner Riley McCarron would have been forced to fair catch the ball during a game.

This should be a fantastic competition, while Bojorquez has the edge on leg strength and distance, Allen’s directional punting and consistency gives him the nod there. This should be fun to watch.

The Patriots place a premium on players who excel on Special Teams among them Matthew Slater, Brandon Bolden, Nate Ebner, Brandon King, Geneo Grissom, Nicholas Grigsby among others. Those players were listed elsewhere as positional players but are truly more special team’s aces than offensive or defensive players.

Ebner in particular was missed for his expertise as the personal protector on punts after he went on IR last year.

Some of the new players or ones returning from injury are also special teams mavens such as Cordarrelle Patterson, who besides being the NFL’s best kick returner, is a very good gunner. Marquis Flowers was brought over last season for his STs experience but parlayed that into a role on defense as well.

What it means is that these players will be fighting for their roster spots every day as well as the positional players. Keep an eye on the kickoff and punt coverage units during training camp. Because those positions will ultimately tell the tale for some of the bottom of the roster players who will either make the team or be released. Bill Belichick and ST’s coach Joe Judge will have some interesting decisions to make.