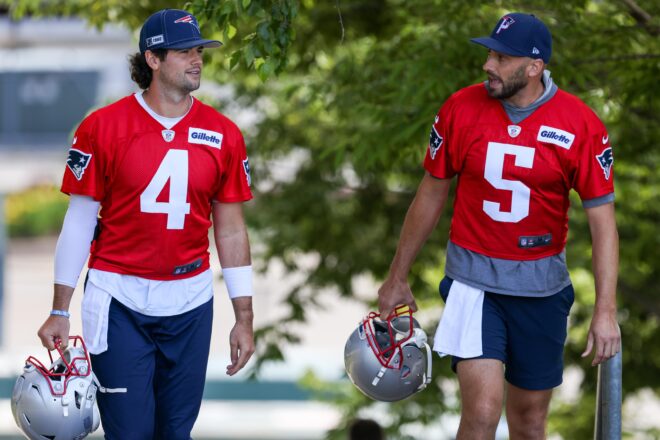 When Patriots quarterback Jarrett Stidham’s name popped up on the PUP list to start training camp, it certainly caught everyone’s attention given the club’s QB situation.

While he was already considered a long shot to unseat Cam Newton and overtake first-round pick Mac Jones, it appears that Stidham may not even be part of that equation.

According to The Athletic’s Jeff Howe, Stidham is apparently dealing with pain in his throwing shoulder and back, which Howe reports has surgery as “a possibility”.

The New England Patriots quarterback has been experiencing pain in his right shoulder and back while throwing the football, according to sources. Surgery has been noted as a possibility, and it remains unclear how much more time he’ll miss.

The former 4th round selection was expected to compete for the starting role last season, but he missed time with a hip injury and dropped off the radar, which saw Cam Newton ultimately start every game with the exception of the match-up in Kansas City.

Newton missed that contest after being diagnosed with COVID-19, which saw Brian Hoyer get the starting nod for that game.   Newton returned against the Broncos but didn’t quite look like himself during an 18-12 loss at Gillette Stadium.

Stidham never got an opportunity to start in 2020, but he appeared in 5 games, completing 22-of-44 throws for 256-yards along with 2 touchdowns and 3 interceptions.

Bill Belichick said Stidham will “miss a little time” on Thursday but there’s reportedly no timetable for Stidham’s possible return, which is likely why the team claimed Packers quarterback Jake Dolegala off waivers on Wednesday.

By: Steve Balestrieri
So afraid were the Patriots coaches of Buffalo’s speed advantage, they refused to bring pressure on Allen for fear of getting burned.
21 hours ago

By: Bob George
The Bills completely obliterated the Patriots, as they scored touchdowns on all seven of their drives in a frustrating loss Saturday night.
22 hours ago