1 month ago at 11:46 am ET
Follow @IanLogue
Posted Under: Patriots News 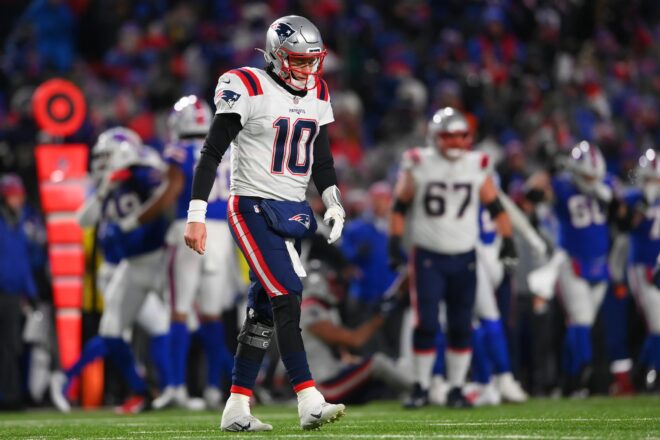 Some thoughts as the New England Patriots wrap up the preseason and start getting ready for the Miami Dolphins.

1) Jones Keeping His Composure This Season Will Be Key

The normally consistent quarterback has had a tough preseason and the way he finished things off Friday night obviously didn’t sit well with him.  He finished the night playing 25 snaps while completing 9-of-13 for 71yds along with an interception that ended New England’s first threat into Raiders’ territory and ultimately led to a touchdown after the Raiders took the ball 32-yards on 5 plays in the other direction.

However, the interception on his target to Bourne looked worse live than it did looking at it after the fact.  Jones just lost track of Raiders linebacker Luke Masterson, who managed to stay hidden behind the offensive line before darting out and coming up with the turnover after Jones had already thrown the football.  Jones simply led Kendrick Bourne back inside not realizing Masterson was there.  Not ideal, but also not as bad as it looked initially. 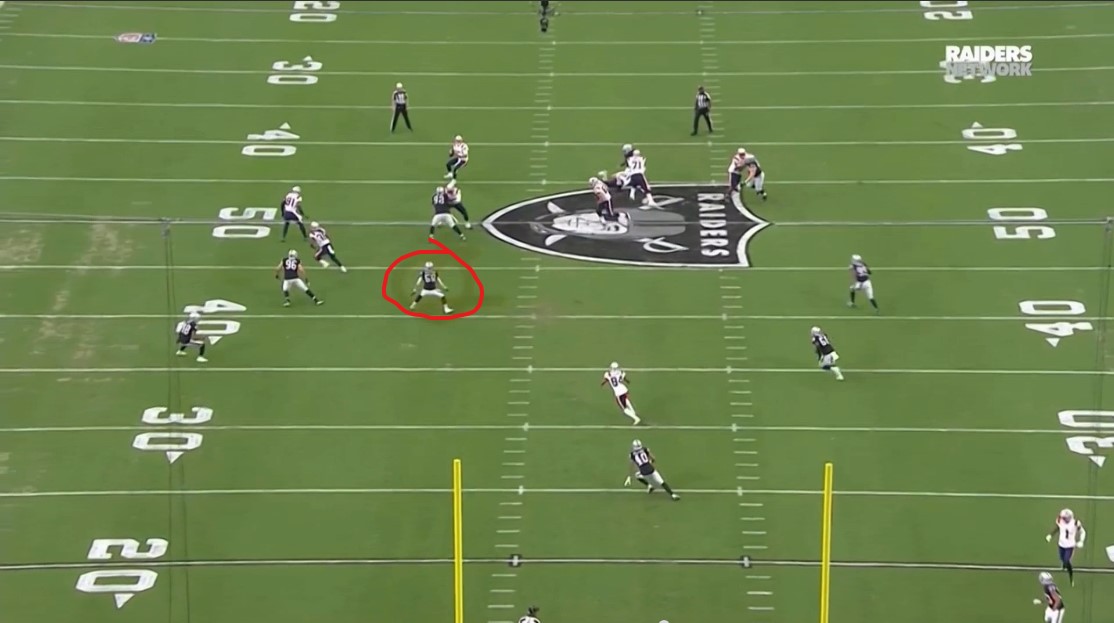 Bourne wasn’t as well-covered as he looked initially after looking at the replay.

Overall, it wasn’t terrible on his part and it didn’t help that they had some penalties that put them in difficult positions, including one that nullified a potential touchdown after DeVante Parker was called for offensive pass interference.  Jones ended up missing just three targeted throws (he had one pass he threw away), completing passes to six different receivers while hitting six of his final eight passes.

Still, the biggest concern with Jones was the fact he was visibly upset following two drives.  NBC Sports Boston’s Phil Perry pointed out that Jones threw the tablet after he came back to the bench following the turnover, and then threw his armband with the plays on the next possession when that drive ended badly.  As a leader, controlling his emotions is obviously important and he admitted it’s something he needs to work on.

“I care a lot about this game and sometimes get a little bit too passionate but at the same time, that’s a great point, don’t let it carry over and I don’t think I did that after the interception and all that,” said Jones. “I try to just clean the plate and start fresh and sometimes that’s getting the frustration out and then moving on.  Obviously, I need to do a better job of just playing the next play and don’t let one little play get frustrated.”

This was a knock on Jones coming out of Alabama.  Former head coach Nick Saban nicknamed the QB “McEnroe”, referencing former tennis start John McEnroe and his reputation for emotional outbursts during his matches.  According to reports, Saban would often ask Jones, “You gonna slam your racket today?”

Jones, who is obviously hard on himself, has clearly been battling this problem since college but it’s one that he’s going to need to get under control in what could potentially be a challenging season.  Because if they face adversity and players get frustrated, the last person who should be exacerbating that problem is the guy who they’re going to need to rely on to get them through it.

There’s no easy way to say it, but this might be the first time Bill Belichick finds himself under any type of real pressure heading into a football season.  Watching the offense struggle the way it has after a transition within the scheme that was agreed upon and endorsed by him is definitely not a good sign.

Taking it a step further, Jones throwing the tablet was one thing, seeing the QB throw the armband sort of implies frustration with the plays, which is definitely bad. While Jones has said the right things each time he’s been at the podium, those are moments that potentially implies he’s not happy with things and he’s clearly the person who matters there.

The big question now is going to be whether or not they stay the course or start making changes.  With the regular season now coming and the fact they tend to scheme for opposing teams anyway, now would seem to be a good time to possibly throw out or reduce the number of plays that aren’t working in favor of ones that Jones and the offense are more comfortable with.  Granted, things take time but we’re more than a month into things and the results obviously are what they are.

To this point, all indications seem to point to frustration within what they’re trying to do, which is going to make it challenging for Belichick to get these guys to buy in heading into the season.  Belichick has always been a master of keeping the locker room together even in the most dire circumstances and he knows what buttons to push.  But execution and results on the field are ultimately going to decide how things go.

As a result, after putting it all on his shoulders each time he’s been questioned about it, getting things worked out and hopefully getting off to a good start feels like it may be a little more important this year than in past seasons.

3) It was good to see Kendrick Bourne on the field

It was good to see Bourne get some snaps on Friday night, albeit the interception Jones threw while targeting him was obviously tough.

That aside, the two have great chemistry and Bourne’s value certainly can’t be overstated. The wideout was the subject of trade talks within the media locally last week coming off of what appeared to be a benching the week before, which didn’t seem to make much sense.

The veteran wideout was New England’s second-leading receiver behind Jakobi Meyers last season, with Bourne hauling in 800-yards on 55 receptions including five touchdowns.  While there should be an improvement from Nelson Agholor this season, Bourne is a dynamic player who seemed headed for a big year coming off of his best season as a pro.

Taking it a step further, given what we saw Friday night, his presence has seemingly only become more valuable heading into the season in an offense that is going to need every bit of talent they have at the receiver position.

With Tyquan Thornton sidelined for the next few weeks and some questions still remaining, Jones will need Bourne to be at his best as the Patriots try and get through what will likely be a difficult start that begins next weekend down in Miami.

4) Fighting for tough yards has been an issue this preseason

Another thing that stood out on Friday night was the lack of intensity that’s been there at times all preseason with players failing to pick up an extra yard when they needed it.

Granted, it’s early, but it’s still becoming somewhat of an alarming trend.  We saw it with Hunter Henry on one drive where he came up a yard short, and we saw it on another when receiver Josh Hammond couldn’t get the yard he needed to move the chains, with Matt Sokol also joining the group after he also failed to fight for another yard on another possession.

Granted, Julian Edelman and Rob Gronkowski are obviously not walking back into the locker room, but this is a trend during each of the preseason games that has quietly stood out as an issue.  While it may have been only the preseason, it’s still tough to flip that switch on when the games count.  It’s possible players are still thinking a little too much as they try and get comfortable in the team’s new offensive system, which could have played a factor in not playing with the same speed we’re accustomed to seeing.

Still, ramping up the intensity is going to be important since every yard seems like it could be critical, especially early on against three difficult opponents in Miami, Pittsburgh, and Baltimore, all of which should be difficult defensively.

5) What Happens at the Tackle Position?

One other challenge heading into the season is going to be the offensive line, notably at the tackle spot, which has been inconsistent and injuries have also complicated things.

Both Trent Brown and Isaiah Wynn saw action with the first group and played 25 snaps, but Wynn has been banged up and while he hasn’t come out and said anything, he hasn’t seemed happy with his transition to right tackle this preseason.

Meanwhile, Brown also took a little heat two weeks ago following a report that the team wasn’t pleased with his effort in Carolina. Brown sat out the game against the Panthers, although no reason was reported as to why he didn’t play.

While the Patriots do have Justin Herron and Yodney Cajuste, neither player is a starter and their depth at that position is clearly limited. We’ll likely see the team look at players who are released in the coming days to hopefully find potential additions to potentially solidify things a little better.

But there’s definitely not a lot of margin for error and injuries or any other possible issues would further complicate this situation, which adds to what’s already been a tough preseason.

With the page being turned to the regular season, obviously the stage is set for what should be an interesting year. Belichick is no stranger to adversity, but what happens over the next two weeks will likely set the tone for whatever success this team is able to have this season.

Needless to say, buckle up, because things definitely seem like they could get a little bumpy heading into this 2022 Regular Season.

By: Steve Balestrieri
Jerod Mayo and Steve Belichick, after playing tight man coverage all day, laid off the ball and allowed big cushions, which Rodgers exploited
15 hours ago