The Patriots head into training camp in just a few weeks and there should be no shortage of competition at a number of spots. As a lead-in to the beginning of camp, we’ll break down the positions and give our take on who is a lock, a near lock for the 53-man roster and who is on the bubble. Next up is the Wide Receiver position.

So next up are the wide receivers. The Patriots have no less than 11 players vying for roster spots although Matthew Slater is truly a special teams’ specialist first and a WR second. For our purposes, we’ll list Slater later with our STs primer.

This is a position that is top heavy with roster locks and it will be hard for some of the players trying to either break into the NFL or established veterans to carve out a roster spot. So the competition here, especially for the last slot will be intense. Another question to be answered is, will the Patriots carry five WRs or six?

Roster Locks: Julian Edelman, Danny Amendola, Chris Hogan, Malcolm Mitchell
Edelman is recovering from another procedure related to his surgery where he had another pin placed in his broken foot. That the team will no doubt opt to go slowly with him will help the other players vying for spots get more reps.

Among the cognoscenti of national NFL writers, Edelman is widely considered a “system player”. While we differ with that assessment, no one can argue his worth with Tom Brady and the Pats. He’s one of  Brady’s favorite two targets in the passing game and his toughness and willingness to do the dirty work is unquestioned. A healthy Edelman in September means big things for this offense, so we may not see much of him in camp.

Amendola has worked himself in Brady’s “Circle of Trust” and become a key member of the wide receiver core. He has a knack for making the tough catches at critical times and is another guy who, while not the biggest guy, has plenty of toughness. He worked his contract again to stay in NE.

Hogan was signed as a free agent from the Buffalo Bills this spring and is another guy that isn’t highly valued elsewhere. But he’s a perfect fit for this New England offense. He can play inside in the slot or slide outside into the “X” position that Brandon LaFell played in the past two seasons. While he doesn’t have the short-area quickness of Edelman, he’s bigger (6’1, 220 lbs) with better top end speed.  He’ll be an intriguing guy to watch as the season unfolds. 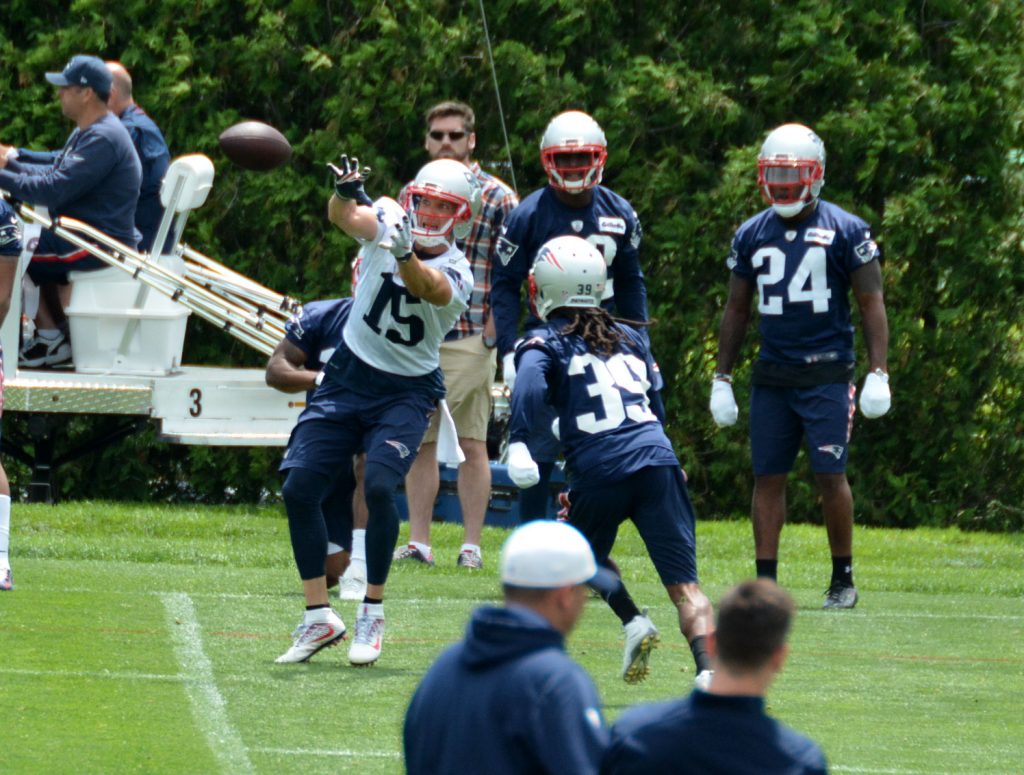 Mitchell is a lock due to his draft position. The rookie wide receiver from Georgia has decent size at 6’1, 195 pounds and played in a pro-style offense in college. He runs good crisp routes, has excellent hands and has outstanding athleticism. He probably would’ve gone higher in the draft but he had some injuries and played in a run-heavy offense. Mitchell injects some much-needed youth into the wide receiver position.

Near Roster Locks: Keshawn Martin
Martin came over in a trade last year with the Houston Texans and showed he was a quick study, learning the Patriots offense swiftly upon his arrival. Now with a full offseason under his belt, Martin is looking to carve out a role with the team.

The speedy, if undersized wide receiver has the versatility that the coaches love. He can play inside in the slot (are we seeing a pattern here?), outside in the “X”, as well as play special teams. Martin was given a contract extension with some decent guaranteed money last year, so the team liked what they saw from him a year ago.

On the Bubble: Nate Washington, Aaron Dobson, Chris Harper
Washington, another Texans’ WR, signed with the Patriots as a free agent in March. The 32-year old veteran was a member of two Super Bowl winning teams earlier in his career and now is looking to add another to his resume.

He’ll be an outside the numbers kind of receiver here. Washington has always been a deep threat kind of player with a 15.2-yard career average per reception. How will he fit in with the Patriots short to medium passing game? He struggled to find a rhythm with Brady in the spring, but there is plenty of time left to get it going.

The clock is running out for Aaron Dobson. When the Patriots drafted him in 2013 NFL Draft he came with a rep of having the size and hands to be a #1 type receiver for the Patriots. But injuries, inconsistent play and a lack of confidence in him place him squarely on the bubble in 2016. He had a strong spring, but will need much more to stick around this year. He’ll have to stay on the field for the entire training camp and preseason and turn some heads.

Chris Harper signed with the Patriots as a UDFA out of Cal last spring. Facing an uphill battle in training camp, he had an impressive summer and preseason and made the 53-man roster in September. But he couldn’t break into the offense last season and unfortunately for him, he’s best remembered by the gaffe he made. He muffed a punt in Denver last November which led to a Denver comeback OT victory. Harper faces much the same odds this season again and will need a strong summer to make the team. 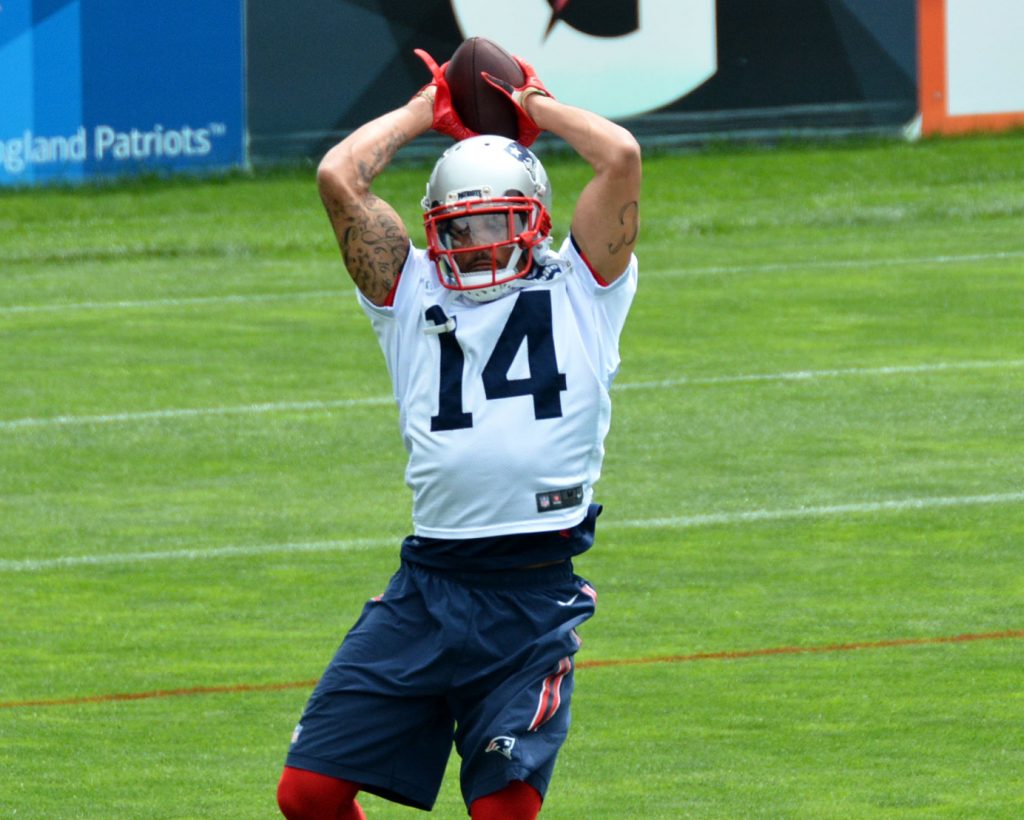 Outside Looking in…. Longshots: Devin Lucien, DeAndre Carter
While these next two players are longshots, don’t go to sleep on either.

Devin Lucien is an intriguing player because he’s bigger receiver at 6’2 and is the kind of guy who traditionally comes out of nowhere to make the team. He played three seasons at UCLA and had just 58 catches before transferring for his senior season at Arizona State.

Playing in the “X” role, he had a solid 2015 with 66 catches for 1072 yards and eight touchdowns. But it was his finish that got the Patriots attention. He snagged 26 catches for 534 yards with five touchdowns in his final three games. Once he got familiar with the offense, his play took off. He was one of Pro Football Focus’ UDFA sleepers to watch.

He’s got very good athleticism, running a 4.49-second 40-yard dash at his Pro Day with a 6.93 time in the 3-cone drill and a 34.5-inch vertical leap. With the logjam ahead of him at WR, it will be a tough hill to climb for the 7th rounder, but we’ve seen this happen before. He may be a good Practice Squad candidate.

DeAndre Carter signed with the Ravens as a UDFA in the spring of 2015. He spent training camp with Baltimore before being picked up by Oakland and finally the Patriots last year. He signed a futures contract with New England and is facing an uphill climb to make the roster.

But again, with the logjam at WR especially players that can play the slot, he’ll have to really have an impressive summer to stick. But if Edelman and Amendola aren’t ready to go at the outset of training camp, Carter could turn enough heads to make a push for a roster spot. He too, like Lucien could end up on the Practice Squad this fall.