7 years ago at 5:30 am ET
Follow @SteveB7SFG
Posted Under: Patriots Commentary 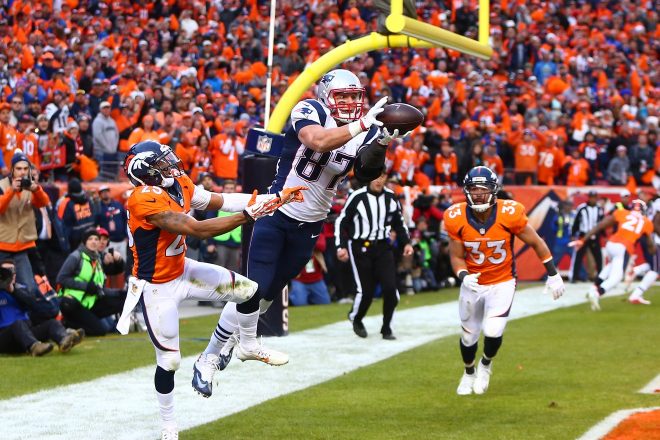 The Patriots head into training camp in just a few weeks and there should be no shortage of competition at a number of spots. As a lead-in to the beginning of camp, we’ll break down the positions and give our take on who is a lock, a near lock for the 53-man roster and who is on the bubble. Next up is the Tight End position.

So next up are the tight ends. The Patriots have six players vying for roster spots.

This position, (like the wide receivers) is one top heavy with roster locks and it will essentially come down to four players competing for one, maybe two roster spots. The question comes down to this: Do the Patriots keep just three tight ends or four?

Roster Locks: Rob Gronkowski, Martellus Bennett
Well Duh! No brainer here. Gronk is the gold standard among tight ends in the NFL. No one possesses the type of athleticism at the position where he can attack the field down the seams, move the chains, and be a huge physical target in the red zone. Oh and he’s an outstanding blocker in the running game.

Gronkowski is one of Tom Brady’s favorite two targets, along with Julian Edelman. He relies on both a great deal and Gronkowski gives him a tremendous target that can be used in any part of the game plan. He enters the season healthy and is poised to have a big, big year.

Bennett is a perfect Robin to Gronkowski’s Batman. Another huge target at 6’6, 273 pounds, he’s a big body who can threaten the seams down the field. He’s also another tremendous blocker who can help out in the running game. 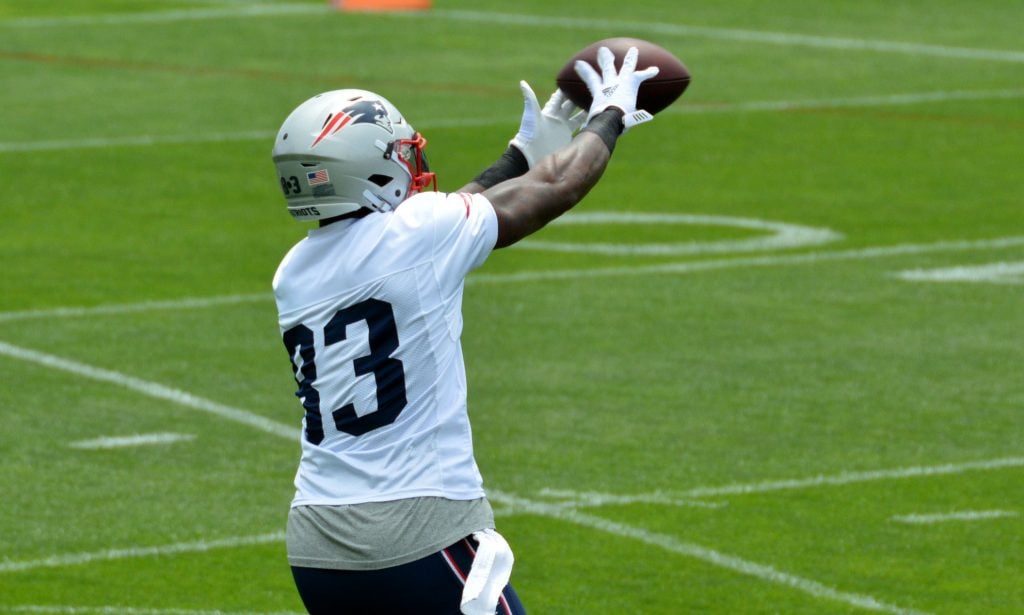 Just two seasons ago Bennett caught 90 passes while a member of the Bears. He and Gronkowski are going to be a nightmare matchup for opposing defensive coordinators. The Patriots will most certainly use a lot of “12 personnel” in 2016 and with the suspension on Brady being upheld in federal court, the two tight ends become even more important in the Patriots offense during the first four weeks.

One can argue that the acquisition of Bennett was specifically targeted for just this scenario.  He will probably be here for just one year and his presence along with Gronkowski makes for a much more potent offense. But with Brady facing a month-long suspension, this move could have been made with Jimmy Garoppolo in mind.

Garoppolo will face a daunting task of replacing Brady for the first month of the season but having Gronk and Bennett will go a long way of making the transition smooth. The package of plays using the tight ends will be a much quicker, easier read for Jimmy G and they along with Edelman will give him a very nice trio of weapons to work with. Not to mention that both will help the team run the football much more effectively this season.

On the Bubble: Clay Harbor, Bryce Williams, A.J. Derby
The Patriots usually like their third tight end to be more of a blocker. And Michael Williams was just that for the team. But unfortunately, Williams tore his ACL during the minicamp during June and was lost for the season. Neither Harbor, Bryce Williams, nor Derby fits that bill. But with both Gronk and Bennett being the blockers they are, perhaps the team will change things up, for 2016 anyway. And of course with the return of FB James Develin the Patriots have used him at times as an H-Back or blocking TE.

Harbor was signed as a free agent this spring and was given a modest contract with the only guaranteed money is his signing bonus of $400,000. His cap hit is just under $1.3 million dollars with a base salary of $900,000.

Harbor isn’t an in-line tight but more of a “move” tight end who can play H-back and occasionally fill in at fullback. During the 2013-2014 seasons, he was solid as the Jags’ #2 tight end and caught 51 passes for 581 yards and three scores. But last year he was replaced by former Bronco Julius Thomas and caught just 14 passes. His most productive day was against the Patriots in Week 3 where he caught three passes for 43 yards and a touchdown.

Bill Belichick raved about his versatility before the Week 3 contest, setting the tone for the eventual free agent signing this spring. The third tight end position is his to lose.

Williams is a big (6’6, 258 lbs), move tight end that converted from a fullback at ECU that the team signed as a UDFA this spring. With his size, one would assume he’d be more of an in-line tight end. But he’s more of a finesse blocker than a mauler like Gronk or Bennett.

He was productive as a senior catching 58 passes for 588 yards and four touchdowns. He still needs polish on his route running skills but has the straight-line speed to attack the seams. He’s got good athletic skills, running the 40-yard dash in 4.94 seconds and the three-cone drill in 7.19 seconds at the NFL Combine.

Derby was drafted by the Patriots in the 6th round of the 2015 NFL Draft and was placed on IR in early August, just days after training camp started. The 6’5, 255-pound former QB, and LB is another “move” tight end who is facing an uphill climb to make the roster.

He played only one season at TE in college so his route running was in need of polish and he wasn’t the greatest blocker, but he has upside as well. Ran a 4.69 in the 40-yard dash at his Pro Day and showed a willingness to run the tough routes over the middle.

Outside Looking in…. Longshots: Steven Scheu
Scheu was a three-year starter at Vanderbilt who suffered from poor QB play that limited his production. He finished his senior season with just 26 catches for 231 yards in 2015. Scheu (pronounced SHOY), is a 6’4, 245-pound move tight end that has soft hands and runs good routes as a receiver.

His issue is speed or the lack of it. Coming out in the draft this season, he was known as a plodder and doesn’t have the burst to attack the seams. It will be difficult for him to gain separation in the intermediate routes. He isn’t a good blocker in the running game. But as a short range target that can help in the short passing game, he could find a niche.