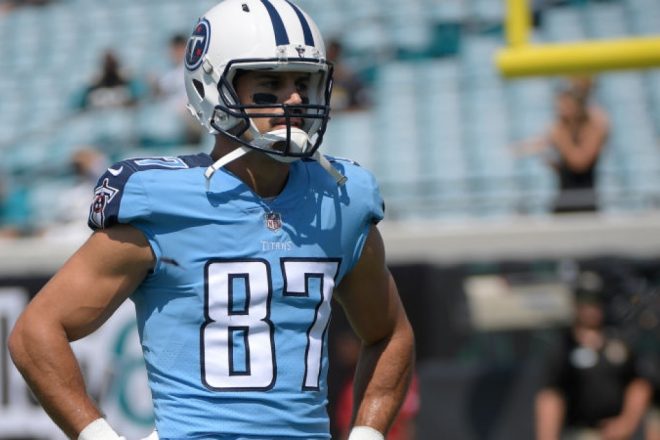 With the surprising news that Jordan Matthews’ injury was severe enough for the Patriots to place him on IR, the Patriots lost out on one of the key free agent signings they made this spring. The team ended up releasing Matthews, I’m thinking, at his request as he probably believes that he’ll be ready to go a lot sooner this season.

But back to the situation at hand, with Matthews gone, the Patriots saw this coming and worked Decker out before he was signed on Thursday. After nearly missing all of 2016 with the Jets, Decker signed with Tennessee and put decent but career low numbers since becoming an every-down player. He caught 54 passes for 563 yards (career-low 10.4 yards per reception) with just one touchdown. But he remains reliable, his 65 percent catch percentage was the second highest of his career.

Can he revert to something akin to his last two years with the Broncos or the first two with the Jets or has he permanently lost a step. Part of his stats could stem from the struggles of the Titans offense. Last season they were just 28th in passing attempts and 23rd in yardage. Catching passes from Tom Brady should be more akin to better stats than Marcus Mariota.

The biggest asset Decker brings to the Patriots is versatility. He can play outside as the Z- receiver or in the slot. As a slot guy, he’s much like Matthews, a bigger (6’3, 215 pounds) who relies on his size to box out smaller defenders. So how will the Patriots use Decker?

Without seeing him run yet in practice, I see Decker as the Z-wide receiver, not the X. He will be used to attack the middle depth routes and work the perimeter and the middle of the field. They can move him around to create matchups in the slot where he logged about 50 percent of the Titans’ snaps last year when the opportunity avails itself. Phillip Dorsett has been seeing a lot of reps in the slot this summer and he’s been one for the more impressive players on offense.

Right now, the wide receiver depth has Chris Hogan, Dorsett, Cordarrelle Patterson, Decker along with rookies Braxton Berrios and Darren Andrews with 2nd-year player Riley McCarron, and Paul Turner. Veteran Matthew Slater is a wide receiver in name only, he’s a special teamer. Veterans Kenny Britt and Matthew Mitchell are not practicing yet and are considered day to day. Julian Edelman will return to the team Week 5 when his suspension is finished.

Decker isn’t a lock to even make the team but I believe he’ll have enough in the tank to beat out one of the younger slot guys (Berrios/McCarron) but time will tell. He had just a tad of experience with Josh McDaniels in Denver during his rookie season.

While the loss of Matthews is a blow, we thought he’d be an integral member of the offense in 2018, it certainly isn’t a death knell. Why? The Patriots still have plenty of talent at the wide receiver position. They like Britt and he’s only a year removed from a 1000-yard season. Dorsett appears primed to shake off his first season blues and be a bigger contributor. Patterson is the wild card, he’s never been able to produce like he was thought to be when he arrived in the NFL. But the Patriots are intent on finding him a role.

And this team has so many other talented pass catchers at other positions. Rob Gronkowski is the gold standard among NFL tight ends. Jacob Hollister seems poised to make a big jump in production from Year 1 to Year 2 and has caught more passes from Brady this summer than anyone. And the production from Rex Burkhead, James White and Sony Michel at running back shouldn’t have anyone pushing the panic button.

So while I’d temper expectations a bit for Eric Decker right now, I think he’ll be fine here. He’s at the age where his one-year deal comes at a good time for him. He’ll be very visible with the Patriots nationally and could parlay this into one more good payday. I expect him to be a model teammate (unlike the other guy fans were clamoring for) and be “all-in” immediately.

While I have never been a big fan of Decker’s, the timing may be just right for him to come to New England and carve out a nice role for himself. His versatility will be a key facet in him being able to pick up the offense on the fly. Without being here all spring, and the first week of training camp, he’s well behind the rest of the receivers. However, it isn’t anything that can’t be overcome with hard work.

Orchestrating all of this is Tom Brady, who has taken the Patriots deep in the playoffs and to a Super Bowl with far less talent than he has right now with this offense. The loss of Matthews and Edelman (for a month) is a blow but this team will be just fine. They always start off a bit slow anyway. No reason to panic and sound the alarm. In one aspect of this, they were fortunate that the injury happened in the first week of training camp rather than Week 9 or 10.