Patriots-49ers was the most-watched program on TV last week 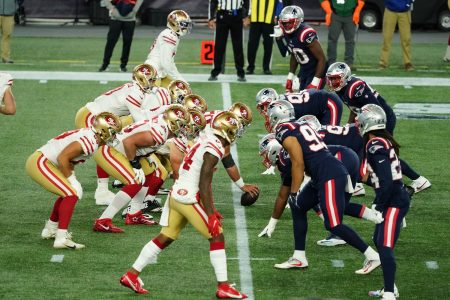 PatsFans.com Supporter
I agree with not over-drafting WR's in Round 1 when there are 6 in the 2nd round with Round 2 grades.

However, the statement below does NOT follow. You speak as if all of those with a 2nd round valuation are equal, and that (as you say) moving down 5 spots loses nothing at all. I don't believe that. That doesn't mean that we shouldn't trade down. We should just recognize the cost. Obviously, if we have 6 players rated exactly equally, trading down 5 spots costs nothing, but that usually isn't the situation.

In any case, a 4th to move down to 39 is reasonable compensation. The 4th from TB would be a high 4th. I used TB as the example because the draft "value" of such a trade is almost exactly "right".
============
A DIFFERENT SITUATION
We are picking at 32 and we would like to draft an OL capable of being a swing OT this year and a solid starting OL next year. Ideally, this player would be LT, although a LG who can play LT is also OK.

In this case, there are NOT 6 such players available in the 2nd round. The situation may very well be to draft Little at 32 (the guard being already gone) or have no appropriate OT available at 56 if we move down.
=====
AS AN ASIDE, I would NOT pass on Lawrence if he is available.

then that is a win for us because the quality of player at 37 is the same as 32.
Click to expand...

PatsFans.com Supporter
I though that I would continue this discussion. I would much rather be at 21 than at 32. The cost is our top 3rd. We could get lucky at 32. I would prefer to have more control with a pick in the 20's.

Player you would trade up for?

Arron Curry (would BB make a trade up for him?)