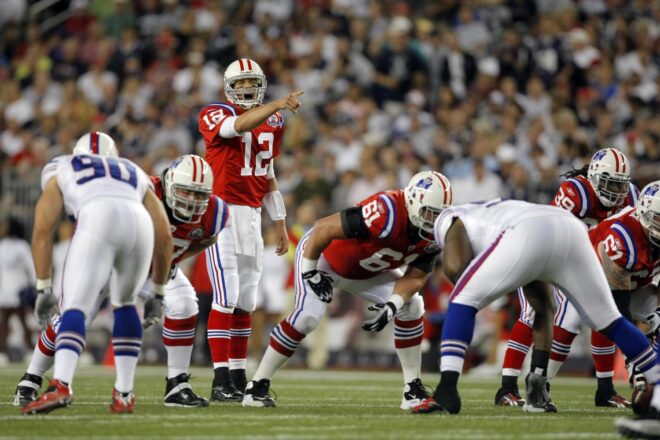 In a special video paying homage to the classic 1980’s film “Back To The Future,” a few Patriots made appearances in full uniform.
The red “Pat Patriot” uniforms were the Patriots’ primary home set beginning in the early 1960s during the teams founding up until 1992 before the “Flying Elvis” logo took over from 1993 onward.

In the years that followed, the red uniforms would make sporadic reappearances before changes to NFL safety rules began requiring players only to utilize one helmet following the 2012 season.

The “Pat Patriot” red uniform uses a white helmet as the “Flying Elvis” sets have silver.

According to the Patriots, the team helped push the NFL to reverse its decision, and sure enough, the red uniforms will appear for select Gillette Stadium games in 2022. The specific dates have not yet been announced.

Fast forward to Wednesday, the Patriots media team released some behind-the-scenes footage from the video shoot as David Andrews, Kendrick Bourne, Matthew Slater, and Matthew Judon as they helped unveil the uniforms.

Check it out for yourself in the link below.