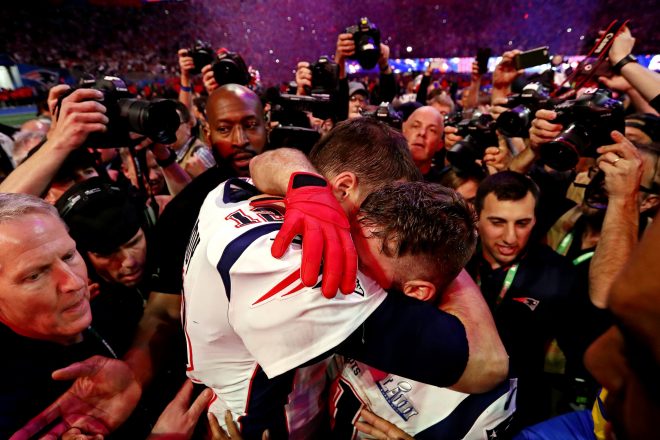 There were photos circulating around the internet yesterday that included Julian Edelman, Rob Gronkowski, and Tom Brady wearing Patriots gear, which definitely had some people talking.

Edelman posted a photo that saw him and the future Hall of Fame quarterback in team uniform pants, along with his former teammate, tight end Rob Gronkowski yet at the time, no one knew why but it appeared to be recent.  The trio was apparently on a movie set and Brady is reportedly co-producing a film called “Eighty for Brady”, which according to IMDB.com, is a football-themed road trip movie about four Patriots fans who travel to Super Bowl LI to see Brady play.

The film is reportedly based on a true story and will include actresses Sally Field, Jane Fonda, Lily Tomlin and Rita Moreno.

The film is listed on IMDB.com with a summary that reads, “The movie is inspired by the true story of 4 best friends and New England Patriots fans who take a life-changing trip to Super Bowl LI to see their hero Tom Brady play, and the chaos that ensues as they navigate the wilds of the biggest sporting event in the country.”

The movie is being directed by Kyle Marvin, with “199 Productions” – Brady’s media company – listed as one of the production companies involved with the film.

(EDITORS NOTE: Portions of the above appeared in this morning’s news/notes column.)

By: Steve Balestrieri
“A lot of guys were getting worried because when we were in the middle of camp, we were wondering what the plan was for our…
5 hours ago

By: Mark Morse
Practices for the East-West Shrine games are getting started. Here are prospects that you should look for during the week leading up to the game…
22 hours ago